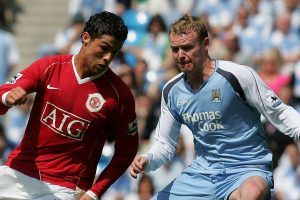 Cristiano Ronaldo is joining an elite list of players who have represented both Manchester United and Manchester City.

The Portuguese forward has reportedly ‘agreed’ a deal to join the Premier League champions in a swap deal which will see Gabriel Jesus head to Juventus.

It comes 12 years after the 36-year-old left rivals United, where he won three English top-flight titles and a Champions League honour.

With his impending move to the Etihad Stadium, Ronaldo has sparked a furious reaction from his former fanbase following the news.

Starting with no less than a member of United’s famous Holy Trinity, the Scot actually spent the 1960/61 season at City before heading to Torino.

After struggling in Italy, he shone under Sir Matt Busby to score 237 goals in 404 appearances for the Red Devils – the club’s third all-time top scorer.

And his career ended at Maine Road when his famous back-heel relegated his former side on the last day of the 1973/74 season.

Do you think Cristiano Ronaldo will win the Champions League with Man City? Let us know in the comment section.

While he was part of the squad, Kidd did not feature for United on the day they were dumped out of the top flight by their local rivals.

Growing up in Collyhurst, he worked up the ranks at Old Trafford before leaving on their relegation for Arsenal.

But he was back in Manchester two years later, scoring 44 goals in 98 appearances.

Following his 1984 retirement in America, Sir Alex Ferguson brought him into the fold 1988 and learned under the Scot for 10 years.

Managerial and assistant stints followed before settling down at the Etihad in 2009 under Mark Hughes, becoming a mainstay of the club over their years of success.

Another product of the United academy system, his break into senior football came in 1994 – two years after David Beckham in the same position.

He managed eight appearances before initially being loaned to City five years later and signing permanently the following season.

While the forward helped the blue side reach the Second Division in 1999, it was deja vu from his Old Trafford career the following season, watching as they reach the Premier League.

The Dane is regarded as one of the best to pull on the United shirt, guarding the goal-posts 398 times to win five Premier League titles and become part of the 1999 treble-winners.

He left for Sporting that year on good terms – but his return to the city, this time in blue, left fans surprised as Schmeichel saw out his career.

This was summarised when former team-mate Gary Neville famously refused to shake the goalkeeper’s hand ahead of their November clash.

The 57-year-old had the last laugh, though, as he won both times that season – meaning that he was unbeaten in nine Manchester derbies.

The Bermudian goal-scorer spent a lot of his career with City, hitting the net 84 times to help them win promotion in the 2001/02 season.

But his career actually started on the other side of the derby, joining United’s academy in 1988.

He won a scholarship to the club but failed to make a competitive appearance, deciding on a move to Rotherham the following year.

Schmeichel lifted the treble with this forward, whose incredible partnership with Dwight Yorke put him on the way to 121 goals in 275 appearances.

Cole was no stranger to controversial moves, having started his career at United’s rivals Arsenal and joined for a then-record £7m from Newcastle in January 1995.

Following his departure six years later, stints at Blackburn and Fulham took him to the Etihad Stadium in 2005 to top their scoring with 10 goals.

Having cut his teeth in the Bundesliga with Bayern Munich, the midfielder arrived at Old Trafford after a year of negotiation between the sides.

He proved to be worth the wait, helping United win the Champions League in his first year as he made.

But injury setbacks followed, leaving for City in 2011.

While he was involved in the wild celebrations of their first-ever Premier League title – holding off their rivals on the last day – his one top-flight appearance that season was not enough for a medal.

One of the most iconic members of this club is a former team-mate of Ronaldo’s.

Following his controversial spell at West Ham, he was snapped up by Sir Alex to form a lethal trio with CR7 and Wayne Rooney.

After two seasons, though, a bumper contract at City saw Tevez turn his back on the Old Trafford faithful to spend four years in blue.

While he scored 73 goals, it mixed in the bizarre as a refusal to play in a Champions League clash with Bayern saw him play golf for four months before coming back and using that celebration.

The most recent new member got his accreditation during United’s 5-1 thrashing of Leeds to open their 2021/22 account.

Sancho is the only one on this list to go the other way, having grown up in City’s academy before leaving for Borussia Dortmund in 2017.

50 goals and 137 appearances later, a year-long saga ended with him signing a £72m deal at United and making his debut in front of a packed-out Old Trafford.

He will be waiting eagerly for an opportunity to impress in his first Manchester derby in red, where he could face Ronaldo.