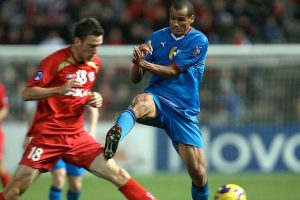 The cream of the crop always rises to the top which is why the best players in the world usually end up in the best leagues in the world.

But a great career is often bookmarked at either or both ends with a spell in a less well-known division, be it as a budding star is breaking through at the start of their career or as they're winding down in their twilight years.

The Eredivisie, for example, is a popular breeding ground for talent, while the deep-pocketed likes of the MLS have become extremely popular retirement homes.

However, with football being a worldwide sport, on rare occasions some unbelievable talent has landed up in the most bizarre of locations. On that note, Daily Star Sport is taking a look at eight top stars who had forgotten spells in random countries.

READ MORE: What happened to the 10 youngest-ever players to play in the Premier League

Brazil and Barcelona legend Rivaldo was one of those footballers who just couldn't let go of the beautiful game, playing well into his 40s – although it's fair to say money was a major motivator in his delayed retirement.

The striker moved to Uzbekistan of all places in 2008 to join the world-renowned – *checks note* – Bunyodkor. But for a contract of £8million over two years, he was laughing his way to the bank. That was, until they only paid him for one year. Regardless, the former Ballon d'Or winner pressed on and somehow ended up in Angola with Kabuscorp in 2012.

He should really have learnt his lesson, as he ended up leaving the continent of Africa short-changed too. Rivaldo – eventually – hung up his boots in 2015.

Is there anyone you can add to the list? Let us know in the comments section. Quite how Nicky Butt ended up in Hong Kong remains a mystery. He might well have just got on the wrong flight at Heathrow.

The midfielder had only retired six months earlier when he ventured to the Far East in November 2011, admitting: “I am not going to lie: I have not been studying the Chinese League or Hong Kong for many years. It is all new to me.”

A tidy pay package set the tone for the ridiculous money which was to come in the Chinese Super League, where he spent just a matter of months with South China.

It was a debut to remember, at least for Butt himself, as he scored a free-kick but then missed a penalty. His spell abroad was a very mixed bag altogether.

The former Manchester United and Newcastle man got himself sent-off in a 2-0 defeat to title rivals Kitchee, who went on to win the league by a point. But he did help his side to glory in the Hong Kong League Cup, scoring another free-kick in the final. Like in China, the Indian Super League was another which had a stupendous influx of money in the mid-2010s. One of those who soaked some of that cash up is Alessandro Del Piero.

Dehli Dynamos forked out a sizeable sum to get the World Cup winner on board, but their investment didn't pay off. Del Piero played just 10 times as the side finished fifth, one place and one point off the play-offs.

Unsurprisingly, the striker had no regrets about the move, saying in 2019: “I have been to India couple of times for different reasons after my ISL stint.

"I am following what is happening in the league. I had a great time there, short time, just three months but happy that the league has grown, it is six months now. I quite like how things are moving." Ex-England shot stopper David James also ended up in the ISL with Del Piero, but not before he had randomly joined IBV of Iceland.

Unlike most, he wasn't looking for a quick buck as his playing days slowed down, but rather was linking up with his former Portsmouth team-mate Herman Hreidarsson, who was his boss.

James took up a player/coach role as he sought to gain experience for his coaching badges. He spent a few months alongside Hrediarsson before going on to join Kerala Blasters the following year.

Now 52, he hasn't pursued coaching any further and has worked more as a pundit for the likes of Sky Sports. Manchester City boss Pep Guardiola is such an unbelievable manager that it's sometimes forgotten he was a top player during his heyday too, featuring in midfield for Barcelona and Spain in the 1990s.

He had plenty more years in him when he left the Camp Nou aged 30, spending time with Brescia and Roma in Serie A. As the clocked ticked down he went to Al-Ahli in the Qatar Stars League, where many ageing greats resided.

Perhaps more eyebrow-raising, though, was his decision to turn down the likes of Manchester City, Man United and Chelsea in favour of a move to Mexico.

Guardiola travelled halfway round the world to link up with his friend and Dorados boss Juan Manuel Lillo, although injuries limited him to 10 appearances before he called time on his playing career. Former Tottenham and Barcelona midfielder Paulinho is well-known for making the most of the Chinese cash-cow having had two spells with Guangzhou Evergrande.

But very few know about his early days in football. It would be expected for him to have risen through the ranks in his native Brazil, as most of his compatriots do.

However, the midfielder ventured far from home to Eastern Europe to try and gain his break in the beautiful game. His professional career began at Vilnius in Lithuania where he scored five goals in 38 games across two seasons.

After they were relegated, Paulinho moved on to another unexpected country, Poland. His season with LKS Lodz didn't go as well, and he returned to Brazil in 2009 before his career took off. Throughout his career Gennaro Gattuso was a bullying brute who dominated the midfield for AC Milan and Italy. How on earth did he end up in peaceful and tranquil Switzerland, then?!

After leaving the San Siro in the summer of 2012 he joined Swiss side Sion, with former club Rangers interested in bringing him back but not having the funds.

His choice of league was a very unusual one but it paid off as he became their manager in February 2013. Although he only lasted until the end of the season until he was sacked, it's worked out in the long run.

Gattuso has since taken charge of AC and Napoli in his home country and is currently boss of La Liga side Valencia. Football has never been the biggest sport in Japan but it looked to be taking off when England legend Gary Lineker opted to see out his career there.

Of course, there was a very nice pay day involved for the future Match of the Day host at Nagoya Grampus Eight, who thought they were getting the man who'd scored 28 goals in 35 league games for Tottenham the year before.

Instead, Lineker struggled with injuries which led to his eventual retirement in 1994 at the age of 34, which in today's standards is somewhat premature.

He managed to add to his impressive career tally just four more times in his 18 games for Grampus, so you're forgiven for forgetting it ever happened like the rest of this list.