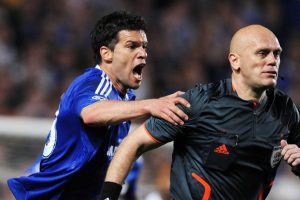 Admittedly, VAR isn't to everyone's taste – and a series of mind-boggling mistakes in the Premier League over the weekend have unquestionably left a sour taste in the mouth.

But after over a decade of fierce campaigning for its introduction, it was finally rolled out in 2018, and it's here to stay.

Gone are the days of Luis Suarez biting someone and getting away with it, of Roy Carroll spilling Pedro Mendes' long-range effort roughly 14.5 metres over the line and not conceding a goal, and of England getting the royal screw job at an international tournament (oh, we'll come to that later).

On the flip-side though, we've had to endure painfully irritating 'armpit offsides', three-and-a-half minute pauses as computer boffins attempt to draw a straight line, and the death of pure elation, knowing that celebrations can be cruelly cut short at any moment now.

But all-in-all, the technology is a force for good, it's just that there're still a bunch of creases to iron out. Whether you love or loathe VAR, glaring errors in big games are (hopefully) a thing of the past.

With that in mind, Daily Star Sport has taken a look back at some massive encounters that would have completely changed had video technology been around.

The quarter-final clash between Argentina and England during the 1986 World Cup will be forever remembered for one reason: Diego Maradona.

The little genius netted twice that day – two contrasting pieces of brilliance and guile that would go on to encapsulate his entire career.

While no one disputes the merits of his so-called 'Goal of the Century', Maradona's opener four minutes earlier set the tone for England's ultimate demise.

After leaping above Peter Shilton to punch the ball into England's net, Maradona wheeled away to celebrate a goal he would later claim was scored by 'the hand of God'.

Argentina beat England 2-1 and went on to win the tournament – and El Pibe de Oro's legacy was sealed.

Which of these eight results was the biggest injustice? Let us know what you think in the comments section below…

Another injustice for England, but one that ultimately sparked the incessant demand for the introduction of video technology.

In truth, Germany were a far better side than England during the 2010 World Cup and fully deserved their comfortable round of 16 victory, but after conceding two early goals, the Three Lions struck back through Matthew Upson and suddenly the momentum shifted.

Moments later, Frank Lampard looped the ball over Manuel Neuer and watched as his effort kissed the bar, bounced two yards behind the line, and out again. But as the Chelsea midfielder peeled away to celebrate, Germany started counter-attacking – somehow, the goal hadn't been given.

England's second wind was extinguished in that moment, and the Germans eventually romped to an easy 4-1 victory – exacting revenge for 1966.

Every English football supporter worth his or her salt knows that Geoff Hurst scored a hattrick in the final of the 1966 World Cup to seal victory for the Three Lions – but in actual fact, he only put the ball in the net twice.

Just a few minutes into extra time with the match evenly poised at 2-2, Hurst crashed a close-range effort towards the German goal, which struck the crossbar and bounced down before being gathered by goalkeeper Hans Tilkowski.

It didn't appear as if the entire ball had crossed the line, but after consulting his linesman, referee Gottfried Dienst awarded the goal.

Hurst would grab another in the dying minutes, but it was his controversial second goal that ultimately won the World Cup for England.

On to another goal that never was. Luis Garcia's infamous 'ghost goal' during Liverpool's Champions League semi-final clash against Chelsea ensured one of the most fascinating underdog runs in European history kept going.

Rafa Benitez's side had scraped through the group stage, but impressive victories over Bayer Leverkusen and Juventus set up a mouth-watering tie with Jose Mourinho's seemingly all-conquering Chelsea side.

The only 'goal' scored over two legs was by Garcia, even though replays showed William Gallas had probably cleared ball before all of it crossed the line.

It was a marginal call, but after stifling a team who had been crowed Premier League champions just a few days earlier so effectively, few could argue that the Reds deserved a place in the final.

But had VAR been in place, would the subsequent 'Miracle of Istanbul' have ever taken place?

More rotten luck for England here, and Sol Campbell's disallowed goal against Portugal during the quarter-finals of Euro 2004 is arguably the most incomprehensible of the lot.

The Arsenal defender appeared to have headed home a 90th minute winner after climbing above Portuguese goalkeeper Ricardo (and John Terry), but the referee inexplicably blew for a foul.

To this day it's unclear what the infraction was, or even who caused it, but it ended up costing England dearly, who were later beaten on penalties.

After losing David Beckham to a soft red card, England battled on against Argentina with 10 men for a place in the quarter-finals.

Campbell rose to head home a Darren Anderton corner in the 81st to put his country on the verge of a monumental victory, but once again the referee inexplicably blew for a foul to let Argentinian goalkeeper Carlos Roa off the hook for badly misjudging the cross.

Just like in 2004, the match eventually went to penalties, and England lost. Story as old as time.

Didier Drogba's foul-mouthed rant after Chelsea were cruelly denied a place in the Champions League final summed up the overwhelming sense of injustice that reverberated around Stamford Bridge on May 6, 2009.

Despite trailing 1-0 on aggregate, Barcelona only needed a goal to progress to the final and Andres Iniesta shattered Chelsea hearts by grabbing an equaliser in injury time.

Looking back, VAR would've almost certainly awarded Gus Hiddink's side a couple of spot-kicks, and a two or three goal lead would've put them out of sight of Barcelona, who would have been denied the treble they went on to win that season.

Sticking with Barcelona and whatever luck they had on their side in 2009, it ran out a year later.

Jose Mourinho's Inter Milan were biting and scratching their way to Champions League glory, but had to overcome Barcelona – who had been breaking records all year – in the semi-finals.

Inter took a 3-1 home win into the second-leg at the Nou Camp, but Gerard Pique's superbly-taken goal left Guardiola's side just a goal away from triumph.

In the 92nd minute, Bojan thought he'd grabbed yet another late winner, only for the assistant to chalk it off for offside. It was the wrong call – and Inter held on.

For Mourinho, it was arguably his finest hour, but like so many great moments in football, it wasn't without controversy.

Inter went on to beat Bayern in the final, and Mourinho was once again on top of the world.