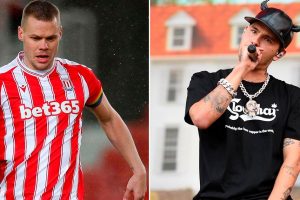 There has been plenty of crossover between the worlds of football and music through the years.

Clearly, musicians are inspired by what they see on the pitch and work them into their lyrics.

However, as the genre has become more popular, some artists have used much more niche references for fans to pick up on.

Here are eight of the strangest football mentions in rap lyrics, with some surprises…

On his 2019 track titled 'Toaster', British rapper Slowthai made reference to none other than former Premier League defender Ryan Shawcross.

The Stoke City legend, who has been forced to retire due to injuries, was surprisingly name-dropped to rhyme with something just as trivial – boot cut jeans.

What's your favourite football reference in a song? Let us know in the comments section.

"Yeah, that's my goal, and then I bid you Freddy Adu. Prodigal Child, y'all not ready for the fu-ture, ture."

The 'American Pele' Freddy Adu faded to insignificance after failing to live up to the ambitious title he was given at the age of just 14.

However, the former Man United trainee is still remembered well and even by one of rap's greatest ever artists, Jay-Z, who spit a bar about him on 'American Gangster' in 2007.

As a massive Tottenham fan, AJ Tracey may now regret hopping on 'Thiago Silva', who has since joined their London rivals.

He has rapped about his beloved Spurs, though, including when he shouted-out defensive midfielder Victor Wanyama, who had an underwhelming spell before leaving for the MLS in 2020, in his track 'You Don’t Know Me'.

“Know what history is, some distant kids surrounded by risky s***. I smoke a spliff that’s big then I’m feeling on top of the world like Bobby Moore in ’66.”

Bobby Moore, the man who led England to the 1966 World Cup final and one of the best defenders of all time, certainly does not belong in a rap bar about drug use. While they are a hip-hop group, Goldie Lookin Chain earned their spot in this list as they dedicated a whole song to their Welsh compatriot Tony Pulis.

The manager, who also enjoyed a lengthy playing career, was Shawcross' boss at Stoke when the 2011 'Tony Pulis rap' was released.

"Ball through your legs like John O'Shea. Who's out next? Olé, Olé."

Ex-United defender John O'Shea had a solid, but steady career, with one of his most memorable moments being a nutmeg on Portuguese legend Luis Figo in a 2003 Champions League clash with Real Madrid.

Irish rapper Pat Lagoon paid homage to the moment from his fellow countryman 13 years later with a line in 'Smooth With It'.

"I’m up front, one touch, bang. Palacio on the back of the dome. My enemies must not have any goals."

Former Argentina and Inter Milan striker Rodrigo Palacio is known more for his awful haircut than his ability in front of goal.

His rat-tail style, which he is somehow still sporting in Serie A, is so bad that British grime artist Ghetts used it lyrically in the 2014 song 'Death Penalty'.