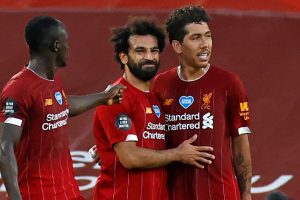 Fenway Sports Group have earned plenty of praise for their displays of initiative in 11 years owning Liverpool, and the board will face some key decisions on player contracts in the next year.

Jurgen Klopp’s success as Reds manager has come thanks in no small part to the club’s backing, but Liverpool are approaching a pivotal juncture in keeping the current squad together.

Mohamed Salah, Virgil van Dijk, Sadio Mane and Roberto Firmino are just some of the stars who recently entered the final two years of their contracts, all of which the club would undoubtedly like to extend.

But with greater success comes certain complications when negotiations roll around, and agreeing extensions with some personnel is sure to prove more straightforward than others.

Arguably the biggest priority at Anfield when it comes to contract situations in need of a resolution, two-time Liverpool Player of the Year Mohamed Salah is one of those whose deal runs out in 2023.

The Egypt international has exploded at the top level since joining the Reds in 2017, scoring 125 goals in 203 appearances for the club and averaging a goal every 133.8 minutes.

Yet despite that fruitful partnership, Salah has made some noticeably spiky remarks regarding a possible extension, telling Sky Sports in May he was yet to discuss a new deal: "No one is talking to me about that, so I can't say much about that.

Where would a fully fit Liverpool squad finish the 2021/22 Premier League season? Let us know in the comments section. "No one in the club is talking to me about anything so I do not know."

At 29 years of age, some at Liverpool may be wary of handing a new long-term contract to Salah, but many would agree the club can’t afford to see such a unique talent leave.

Currently just ahead of Thiago Alcantara as the club’s top earner on £200,000 a week, Salah should move further clear as Anfield’s clear-cut wage king if he pens a new contract.

While the player might have hinted discussions have been slow until now, Salah is poised to receive a new contract this summer, the Mirror report.

It’s almost eerie how much of Salah’s current situation matches up with that of wing partner Sadio Mane, who is also 29 and has a contract set to expire in the summer of 2023.

Liverpool would consider it a major loss if they were to fail in convincing either one of the forwards to sign new terms; to lose both in the same span could prove devastating.

Fortunately, Mane appears motivated to stay at Liverpool for the foreseeable after he said in March: "I am happy, I am really enjoying sharing the pitch with my team-mates for Liverpool Football Club.”

Asked about their miserable form at the time, he added: “To change it? Nothing else but stick together, be positive and fight.

"This is what we try to do to change this situation and I'm sure that it will change.

“I am more proud than ever to be a Liverpool player.”

The Reds currently have a bargain on their hands considering Mane’s £100,000 wages mean nine others at the club earn more than him, with a significant salary increase likely to come with any extension. The hunger to see Virgil van Dijk succeed at Liverpool feels stronger than ever after he missed most of the 2020/21 season with a knee injury, but there are also question marks abound.

The Netherlands talisman is only just below highest-earner Salah in the current wage structure, but Van Dijk will surely still seek a notable bump to extend his current deal, which also runs out in 2023.

Recently turned 30, the former Southampton and Celtic star will be well aware of how valued he is as one of the world’s top centre-backs, with the potential to play at the elite level for another four or five seasons. Debate has raged for some time as to just how essential Roberto Firmino is at Anfield and whether the team could upgrade his position—but the one opinion that matters most is Klopp’s.

Regardless of whether some think he doesn’t score enough goals—he has 87 in 292 games for Liverpool—Firmino is valued as the central figure in his manager’s world-class trident.

Approaching his 30th birthday and another whose contract expires in just under two years, the Brazil international may fall down the pecking order as a slightly lesser priority compared to others in talks.

Versatile Fabinho came to Liverpool’s rescue when he filled in as an emergency centre-back for big chunks of last season, and it looks likely a new contract could be a fitting reward.

Another Brazilian whose current terms would see him become a free agent in 2023, it would make perfect sense to offer the the former Monaco marvel a five-year deal this year.

At 27, that would take Fabinho past his 32nd birthday by the time that new contract would reach its conclusion, working out well for all parties.

No imminent concern considering he agreed a six-year commitment when he joined Liverpool in 2018, but Alisson is set to be rewarded nonetheless for his contributions since then.

The 28-year-old won the Champions League in his first season at Anfield and followed that up with Premier League glory in 2020, surefire signs he must be doing something right on Merseyside.

It’s understood Klopp wants to reward his No. 1 after Alisson fought through family tragedy earlier in 2021, with a new five-year contract supposedly in store for the former Roma star.