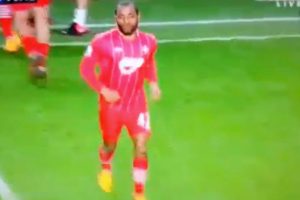 Unfortunately for Puncheon, the image of him giggling as he jogged back onto the pitch in the 70th minute, serenaded by the chant, is what football fans think when his name is mentioned. However, the English winger isn't the only sporting star to be caught short.

There's a long list of stars who had to take a quick toilet break when performing, some worse than others: we're looking at you, Gary Lineker. And Daily Star Sport is looking at five sporting stars who couldn't resist nature's call.

Cameras didn't catch Jason Puncheon leaving the field in 2013, but they certainly caught him coming back.

Sky Sports commentators had to reassure viewers that Puncheon wasn't coming on as a substitute, as a back of "Jason Puncheon, he went for a s***," rang in the background. The commentators apologised for the language, before joking the crowd knew where he went.

Do you remember Jason Puncheon's close call? Let us know in the comments section

Gary Lineker has presented Match of the Day in his underwear, smashed in goals for England and Barcelona…and he once s*** himself at Italia 90.

“I managed to get through the first half despite terrible stomach cramps," he said in an interview with the History Channel. Anyway, the ball went and I kind of go for it but I stumble a little bit. And as I stumbled, I… relaxed.

“I remember Gary Stevens coming up to me and he’s looking over me saying ‘are you alright?’ And I just remember saying: ‘I’ve s*** myself?' What do you do?"

Paula Radcliffe won the 2005 London Marathon, do you remember that? Of course not, we only remember the marathon star answering nature's call.

“It is funny because out of everything I have achieved I don’t think I will ever live it down," she joked years down the line. “I had bad stomach cramps and put up with it for as long as I could.

Dutchman Tom Dumoulin looked to be en route to his first-ever major success in cycling, until he had to climb off his bike and take a dump.

The race went on as Dumoulin, who was in the lead, squatted at the roadside halfway up the climb in Italy. Dumoulin lost a huge chunk of his lead, and his upset stomach meant he would drop the overall lead in the coming days.

However, Dumoulin managed to wrestle back control of the race on the final day, winning his only Grand Tour.

The most recent entry to this list saw Eric Dier have to sprint off the pitch as Tottenham Hotspur clashed with Chelsea in the Carabao Cup.

Cameras inside the tunnel at the Tottenham Hotspur Stadium caught Dier sprinting into the changing rooms. And then, in a hilarious turn of events, a confused Jose Mourinho was seen heading after Dier to see what was going on.

Dier later said: "He [Mourinho] wasn't happy but there was nothing I could do about it, nature was calling!"