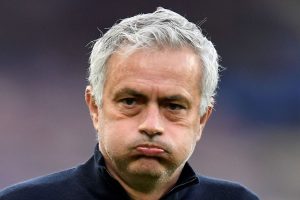 Tottenham are once again looking for a new manager after Jose Mourinho was sensationally sacked by the club on Monday.

The Portuguese boss was hoped to be the man to usher in a new era of success for Spurs, but was dismissed following his side's dismal recent showings in the Premier League.

And he didn't even last long enough to take charge of the team in this weekend's Carabao Cup final, with Ryan Mason and Chris Powell set to take over temporarily and lead the side out at Wembley.

Talk will now turn to Mourinho's successor, with a number of candidates thought to be being considered by chairman Daniel Levy.

Here are five of the potential front-runners…

The favourite with most bookmakers, Julian Nagelsmann is the man most Spurs fans would probably have as their No.1 choice.

The 33-year-old has already made a huge impression in his short career by guiding RB Leipzig to the Champions League semi-finals last season, along the way masterminding a 4-0 aggregate win against Spurs in front of the watching Levy.

And he has continued to shine in the current campaign, with his side second in the table.

However, with Bayern Munich manager Hansi Flick set to leave the club at the end of the season and take over the German national team, Spurs could face stiff competition for Nagelsmann from the Bavarian giants, and he may well prefer to stay in the Bundesliga.

Brendan Rodgers' stock has risen even higher this season following yet another superb campaign with Leicester City.

The Foxes continue to punch above their weight, and currently sit in third place in the Premier League and have an FA Cup final against Chelsea to look forward to.

Rodgers is a figure who is believed to have impressed Levy in the past, with reports he was the number one target to replace Harry Redknapp back in 2012 before Andre Villas-Boas got the job.

It would have seemed unlikely Rodgers would fancy the move to North London if he finishes the job and ends the season with Leicester in the top four.

But given the recent news about the European Super League, he may be changing his mind.

Max Allegri has been perennially linked with almost all the big jobs ever since leaving Juventus in 2019.

The 53-year-old Italian certainly has winning pedigree (although so does Mourinho), having picked up six Serie A titles during his time at AC Milan and Juve.

He also hinted at his desire to coach in the Premier League by revealing he was learning English during an interview last year.

There may be worries, however, that he has no experience of managing outside Italy, and Levy will be desperate to avoid a repeat of previous expensive foreign managerial flops such as Juande Ramos and Jacques Santini. Given his success in charge of Rangers, Steven Gerrard is another manager who is being linked with a number of big jobs at the moment.

The Liverpool legend has guided the Gers to their first SPL title in ten years, and could well add the Scottish Cup to his trophy cabinet too after his side beat bitter rivals Celtic 2-0 in the fourth round on Sunday.

It would certainly be a risky appointment given his relative lack of experience at the highest level, but one which would be a high-profile and intriguing one for Spurs.

A bigger question, however, may be whether Gerrard would fancy a Premier League job that isn't an emotional return to his beloved Liverpool.

Speaking of club legends, Ledley King is a man adored by all Spurs fans following his 14 seasons playing at centre-back at White Hart Lane.

Since his retirement he has gone into coaching, and served as part of Mourinho's backroom staff.

Again, it would be a somewhat left-field appointment, and one which would carry with it a great deal of risk.

But what a story it would be if King could come back to become as big an icon as a manager as he was as a player.

He would certainly be guaranteed more popularity from the stands than Mourinho ever had.