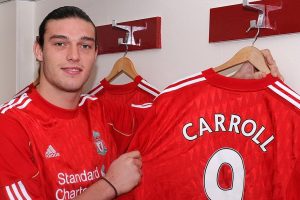 Selling the crown jewels can appear like a very attractive proposition for football clubs, who are tempted by the power that a big pile of money can bring.

But while selling your best player is often unavoidable in modern football, replacing them can be a very difficult task – even if you are suddenly flush with funds. Lots of money can actually prove to be problematic, with selling clubs often deciding to inflate their prices as a result.

Meanwhile, the time pressure of a transfer window can cause panic buying. Negotiations can drag on for weeks, limiting the amount of time left to bring players in once the star player has exited. It is in this context that some clubs have stumbled, replacing star players with absolute flops.

With Liverpool hosting Tottenham in the Premier League this evening, Daily Star Sport grasps the opportunity to look at some of the worst offenders.

Torres was an absolute sensation at Liverpool, scoring 81 goals in 142 games over four years with the club. He was so good in a red shirt that Chelsea decided to break the bank for him midway through the 2010/11 season.

After a protracted transfer saga, Torres eventually moved to west London for £50million on the January transfer deadline day – a fee which made him the sixth-most expensive player in history at the time. Flush with cash, Liverpool paid £35m of that fee straight to Newcastle to sign human battering ram Carroll, who had scored 34 goals in 134 appearances for his hometown club.

Perhaps predictably, it did not go well. Carroll scored just 11 goals in 58 appearances for the Reds before being loaned to West Ham after two years. He eventually signed for the Hammers on a permanent deal, while Torres’ career also took a nosedive at Chelsea in a lose-lose situation.

Carroll was not Liverpool’s only misstep in the transfer market, either. In the summer of 2014, Barcelona made a big play to sign Suarez from Liverpool. Football Leaks later revealed that the Spanish giants paid around £65m for the Uruguayan striker, who had scored a Torres-like 82 goals in 133 games for Liverpool.

Understandably, Brendan Rodgers wanted a replacement. Surprisingly, Liverpool gambled, going for Balotelli from AC Milan. He cost £16m and scored just four goals in 28 appearances. Also signed that summer were Divock Origi and Rickie Lambert. None of them filled the hole left by Suarez, which remained gaping until Jurgen Klopp began his revival on Merseyside.

HAVE YOUR SAY! Can you think of any other examples of stars being replaced with flops? Comment below.

Spurs sold Bale to Real Madrid for £85m at the end of the 2013 summer transfer window. Chairman Daniel Levy did extremely well to get that transfer fee, but the club was less successful in completing the next step.

In came seven new players, for a combined total of £105m over a 55-day period to plug the gap: Lamela, Etienne Capoue, Nacer Chadli, Vlad Chiriches, Christian Eriksen, Paulinho and Roberto Soldado. Of those, it was Lamela who represented the closest to a Bale replacement.

While the Argentine lasted the longest out of all those players, only departing this summer to Sevilla, and was wildly popular with fans due to his propensity to score goal-of-the-season contenders and bloody-minded attitude, he cannot be viewed as an out-and-out success.

Aston Villa managed to get £100m for Grealish last summer – a British transfer record. That was an excellent fee for their hometown hero and the Birmingham club appeared initially to have a plan about how to spend it.

Danny Ings, Emi Buendia and Bailey arrived on permanent deals, while Philippe Coutinho joined on loan and Ashley Young was signed on a free transfer. The problem was that Villa’s side was built around Grealish, meaning new players were always going to struggle to fill his boots.

Buendia and Bailey came in as creative attacking players and neither has made much of an impact at Villa Park. Villa beat Arsenal to the signing of Buendia from Norwich – paying a fee which could rise to £38m – and yet he has just two goals and five assists in 32 games so far. Bailey cost £30m and has struggled with injuries and has one goal and two assists in 18 appearances.

Probably the hardest act to follow in all of football is that of Ronaldo at Real Madrid. The Portuguese superstar scored a preposterous 450 goals and registered 132 assists in 438 games for Los Blancos before heading to Juventus for around £88m in July 2018. Whoever arrived at Real that summer was doomed to failure in comparison.

That player was Diaz, who rejoined the club from Lyon for a touch under £20m, due to Real owning some of his economic rights. The striker, who came through Real’s academy, has been a flop at the club since returning and taking Ronaldo’s iconic No7 shirt. He has rarely had a run in the team and has 11 goals in 71 appearances altogether.

Diaz can take comfort from the fact that he isn’t the only one to fail in Ronaldo’s footsteps. When Manchester United sold Ronaldo to Real in 2009 they brought in Antonio Valencia, Mame Biram Diouf, Gabriel Obertan and Michael Owen in the same window. It’s fair to say that Valencia was the only hit in that desperately poor window.

Selling one of the best players in the world is a task fraught with difficulty. Just ask Barcelona, who flogged Neymar to Paris Saint-Germain in August 2017 for a whopping fee of £200m, but then didn’t know what to do with the money.

Barca opted to spend it all immediately, bringing in Coutinho from Liverpool and Dembele from Borussia Dortmund at wildly inflated prices. Neither have stood the test of time in Catalonia and the club are still paying for their pay first, ask questions later motto now.

Dembele remains at the club but has been plagued by injury. The 24-year-old French winger has 32 goals and 32 assists in 147 games for Barca and has been a real distraction this season due to his expiring contract. Barca have discussed a new deal with Dembele on several occasions but nothing has been forthcoming yet and they may now decide to cut their losses.