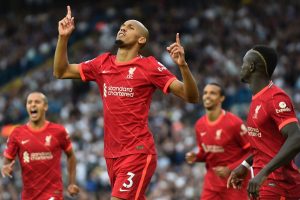 Jurgen Klopp’s Liverpool beat Leeds United 3-0 on Sunday evening, but the victory was overshadowed by the horrific injury to exciting prospect Harvey Elliott.

In the 58th minute, Pascal Struijk slid in to try and prevent a counter-attack in what looked like a routine tactical foul, but the medical teams rushed on to the pitch as Elliott was in clear discomfort.

The former Blackburn loanee was structured off of the pitch and Struijk was dismissed.

Mohamed Salah opened the scoring in the 20th minute as he tapped home a Trent Alexander-Arnold cross from close range, scored his 100th ever Premier League before Fabinho bundled home a corner in the 50th minute.

Sadio Mane finally scored in the 92nd minute, having missed numerous chances beforehand, as he turned on the penalty spot and fired past Illan Meslier after a neat pass from Thiago.

Plenty went well for the Reds, what role did Klopp’s decisions have to play in that? Klopp’s decision to play Harvey Elliott as an attacking midfielder rather than opting for a more stable trio was ideal for this game.

When Leeds pushed on but were dispossessed, there was an abundance of space between their midfield and defence which the Englishman exploited.

With Fabinho and Thiago providing a stable base for him to work off of and relieve him of defensive duties, the 18-year-old was able to drift into pockets of space and cause the shaky Leeds defence plenty of issues, thus giving the likes of Mane and Salah more space to work with as well.

Now sidelined for what is expected to be a substantial period, Elliott will be a huge loss for Klopp as he was beginning to really settle in the top-flight.

Thiago in both boxes

Many have raised questions over whether former Bayern Munich midfielder Thiago is capable of performing week in week out in the Premier League, but if he can replicate this performance going forward then he will silence those doubters.

Where Liverpool were so calm and composed in possession by slowing things down and preventing the game from becoming hectic, it gifted Thiago plenty of time to create from deep.

The Spaniard was able to drift forward when needed but also dictate the tempo of the game and sweep the ball out to the two wingers to cause chaos.

Defensively, an area where the 30-year-old has been doubted, Thiago was impressive. He was intelligent in sniffing out the waves of counter-attacks, was sharp to a tackle and overall took a lot of the weight off of his defences shoulders. As ever, Fabinho was excellent for the Reds. By having the Brazilian sitting in front of the backline and intercepting possession constantly, it meant that Thiago, Elliott, Salah, Mane and Diogo Jota were all able to bomb forward without desperately needing to retreat.

Klopp has to build his midfield around Fabinho, he is too important not to start every fixture and provides so much defensive stability. (edited)

Sticking to his guns over Trent

Liverpool star Trent Alexander-Arnold played in the middle of midfield while on England duty and it had been suggested that he would play there for the Reds before too long.

But Klopp has always been adamant that he will stay at right-back, a move which paid off in abundance against Leeds.

Alexander-Arnold was able to control the game at points, drifting forward into gaps left by Thiago and Elliott in order to play some key passes.