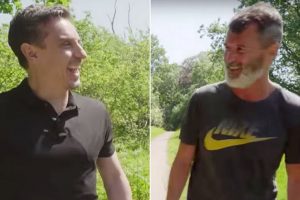 Gary Neville caught up with his ex-teammate Roy Keane to ask him 50 quick-fire questions to celebrate the former Man Utd midfielder’s 50th birthday.

Neville walked alongside Keane and asked him questions, while the former United captain took his German Shepherd for a walk.

The Q&A features on Neville’s new Youtube channel, ‘The Overlap’, which launched in April.

The duo, who are now both Sky Sports pundits, played for many years together at Old Trafford, where they both won a vast array of trophies together under former boss Sir Alex Ferguson.

It’s hard to picture Keane as someone who likes to take part in fancy dress, but the former United midfielder explained how he got involved when he played at Nottingham Forest.

“We done a couple of Christmas functions where we got dressed up,” he said before asking Neville if they did a similar sort of thing at United.

“At Forest I went as a convict.”

Where will Man Utd finish in the Premier League this season? Let us know in the comments section below.

Keane struggled to give a definitive answer for this one but settled on another former United legend.

“Because I played with him in the middle of the park I’d go Butt or Scholes. Scholes maybe because he’s got a goal in him,” Keane said.

When asked about his favourite holiday destination, Keane said he liked taking trips across the pond to the United States.

“I suppose I like a bit of America, the anonymity over there,” he told Neville.

He later went on to describe San Francisco as his favourite city in the world.

Keane loves to take part in thrill-seeking activities in his free time and told Neville how he had already participated in paragliding.

The former United man insisted he would love to tick parachuting or bungee jumping off his bucket list one day.

There were a number of contenders for this one and instead of picking one player, Keane settled for three.

He explained how Norwegians – Ole Gunnar Solskjaer, Ronny Johnsen and Henning Berg – who all played with Keane at United, were not best known for their fashion sense.

By contrast, he named Ryan Giggs and Lee Sharpe as the two snappiest dressers out of his old colleagues.

There was no hesitation with this one, with David Beckham taking the unwanted accolade.

“He was always on his phone,” Keane said of the Inter Miami owner, who began his career at United.

Beckham spent 11 years playing with Keane in Manchester before departing for Real Madrid in 2003.

When asked who his favourite superhero was Keane was initially unsure about the question.

“What’d you mean, something silly like Batman or Spider-man? Or something real?,” he said before Neville clarified it could be anything.

Keane was exposed to many brilliant footballing atmospheres during his 17-year playing career.

However, the former Republic of Ireland international told Neville the contests against Arsenal during his days at United were the best he’s ever experienced as a player.

“I think our games against Arsenal were pretty good,” he said, while also naming Highbury as his favourite away stadium.

Keane experienced a number of hostile atmospheres during his lengthy playing career but picked out two contenders for the prize.

Away trips to Elland Road to face Leeds during their former glory days as well as playing games in Turkey – a country renowned for its fierce stadium atmospheres.

Despite devoting his whole life to football, the former United midfielder told Neville there are other sports he enjoys.

He named Rugby League and Boxing, before stating that he loves watching the All Blacks.

Keane refused to pick between heavyweight rivals Anthony Joshua and Tyson Fury, and had a similar struggle to choose out of the two former Oasis stars, but informed Neville he was more likely to put up with Liam over Noel.

“I’d probably tolerate Liam more than Noel but they both get on my nerves, like the two boxers, but maybe Liam” he said.