A hat-trick from NSW winger Maya Stewart propelled the Waratahs to a 33-3 victory in their Super W opener against the Melbourne Rebels but captain Grace Hamilton stressed there was plenty of room for improvement.

NSW, with five debutants in their starting XV, led 21-3 at the break and kept their opponents to nil in the second half to record a five-tries-to-two victory in Melbourne. 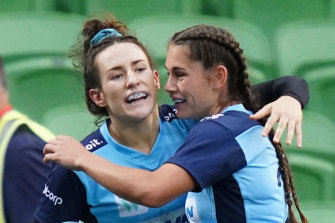 Maya Stewart is congratulated by Waratahs teammates after scoring a try at AAMI Park on Friday.Credit:AAP

A couple of penalty tries either side of half-time ensured the Waratahs had a healthy buffer before an arm wrestle in a gritty final 25 minutes.

The Rebels, who are yet to win a game in two seasons of Super W, were on track for their lowest losing margin before Stewart darted down the right with seconds remaining to bag her third five-pointer.

“I just said you’ve got to back your pace and Maya was nervous coming into today,” Hamilton said on Fox Sports. “She backed her ability and I’m really proud of her for that.”

Despite the scoreline, Hamilton wasn't completely thrilled. “We can obviously do better,” she said. “That has blown the cobwebs out. It was quite dewy out on the field. We’ve just got to play to our strengths. We got up today but we’ve got a lot of learning to do. Our discipline in the first half was really good but I think it slipped away at the end.”

Our discipline in the first half was really good but I think it slipped away at the end.

Last year the Rebels were embarrassed 112-0 against Queensland in their season opener. It prompted plenty of soul-searching and the side improved as the season went on.

The early signs were positive for the hosts. There was a focus on line speed and aggressive defence to ruffle the Waratahs’ feathers but it was NSW who took the early lead thanks to Stewart, who benefited from an intercept by Katrina Barker in the seventh minute. Stewart turned on the gas and streaked down the right wing for her second try.

Rebels halfback Georgia Cormick then surprisingly took the three points on offer from a penalty despite Melbourne trailing 14-0. Remarkably, they were the first points the Waratahs had ever conceded away from home in the Super W.

A slippery surface made ball handling difficult and there was no shortage of knock-ons which slowed the speed of play.

NSW were occasionally tested in defence, particularly midway through the second half, but they remained composed as the Rebels pushed for a five-pointer.

The sides had met twice before, with NSW coming away victorious on both occasions. There was a 57-0 win in 2018 before another comfortable 66-12 result in Bathurst last year.

Last year the Waratahs and the Reds played out a couple of tight contests – NSW won both games by three points, including the final – but the competition needs the likes of the Rebels, Brumbies and RugbyWA to lift their standards to avoid another two-horse race.

Elements of the Waratahs’ game were far superior to their opponents. The scrum was almost a non-contest, kicking was far better – an honourable mention goes out to Cormick though – and they boasted a terrific attitude and alignment in defence.

NSW have the bye next weekend before locking horns with the Brumbies at Bankwest Stadium before the men take on the Lions.