The fact Waratahs women’s coach Campbell Aitken was left feeling a little underwhelmed after his side’s 33-3 season opening victory against the Melbourne Rebels shows just how high standards are at NSW.

The Waratahs defied the wet conditions in Melbourne to grind out a five-tries-to-none result to continue their unbeaten record in the Super W since the competition began in 2018. 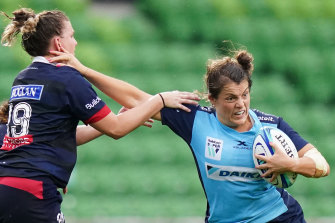 Waratahs captain Grace Hamilton had a fine game against the Rebels on Friday. Credit:AAP

Dropped balls and a lack of back line spark were byproducts of the inclement weather. Aitken was quick to keep a lid on the excitement following the victory considering in previous years the Waratahs had chalked up 57 and 46-point wins over the Rebels.

"We’ll take the result, but the performance probably wasn’t what we expected it to be," Aitken said. "If you’d said before the game the scoreline was going to be 33-3, I probably would have been a little disappointed but, given the conditions, I think we were pretty comfortable. We managed to score five tries in slippery conditions.

"When things weren’t going right, mainly due to the weather, we got a little frustrated and that leads to further mistakes. It’s just a little bit of composure and patience [that we need]."

The Waratahs will come away from Melbourne buoyed by the fact their set-piece was solid and got them out of trouble in unfavourable conditions. But the reality is the two-time Super W champions want to employ an up-tempo game and give their backs time to shine.

"We want to play an expansive brand and I think last year we hadn’t quite got there," Aitken said. "We’ve got such speed out wide on the wings and skilful backs that we want to play a wider game.

"There’s a duty to play an expansive style at NSW that gets the crowd excited and gets people wanting to play rugby."

One player who lived up to that billing was 19-year-old Maya Stewart, scoring three tries – two in the first half and one on full-time – in a thrilling display of speed.

"Maya is one of the quickest players around and showed what she can do in space," Aitken said. "She played well last year and this year we’re looking for her to really kick on and play with a lot more consistency. 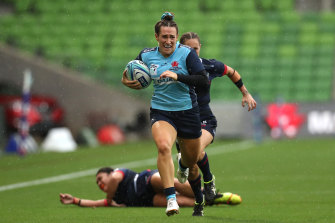 Maya Stewart was impressive in a three-try display against the Rebels.Credit:Getty

"She’s got aspects of her game she can work on but there is no substitute for speed."

NSW have a bye next weekend before facing the Brumbies at Bankwest Stadium in the lead-up to the Waratahs’ Super Rugby outing against the Lions.

The side won't have the week off though, with a trial match against Fiji on Friday night at Waratahs headquarters in Daceyville.

The Fijians recently qualified for next year’s Rugby World Cup and are looking to play more games.

Meanwhile, Mahalia Murphy is set to feature for the Waratahs in coming weeks after being let go by the Australian sevens program.

"She brings a lot of experience and she will definitely be utilised," Aitken said. "It was a bit early to bring her in against the Rebels but we’ll use her in the next few weeks."