Good heavens that was close.

Wales almost saw history repeat on them at the World Cup as they so nearly lost to a Fiji side at times playing rugby from the heavens.

As it was they did not suffer the woes of defeat like in 2007 and equalled their best-ever tournament comeback, having been 10-0 down and emerging victorious. 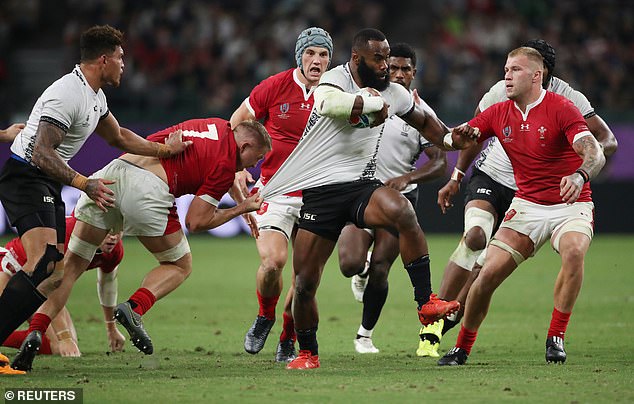 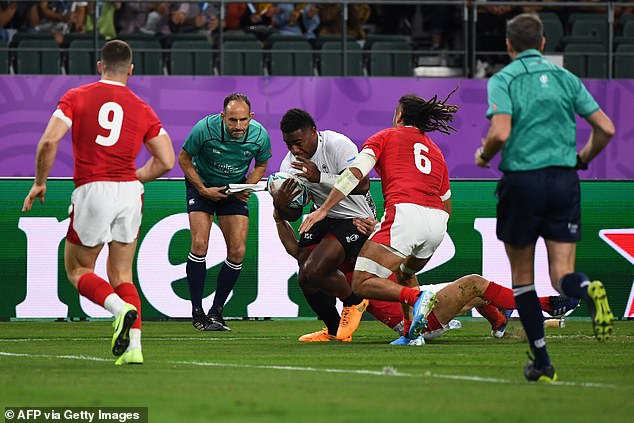 Josua Tuisova gets the Islanders off to the best possible start, scoring after just three minutes

Josh Adams scored a hat-trick, having been at fault for both early Fiji tries, and Liam Williams took a fourth to make sure Wales qualified for the quarter-finals back here in 10 days’ time.

There is great credit in the way that Wales did not succumb to the Fijian storm in Oita – but for large parts they were jittery, disjointed and in world’s of pain. Jonathan Davies and Dan Biggar both went off – this might have been a win, but Fiji’s impact on Wales could extend deep into the tournament.

The Pacific Islanders were such a joyous racket of pace, power, precision and downright pazzazz. Josua Tuisova, Kini Murimurivalu scored and they took a penalty try.

But when it came to it they did not have enough, and exit the World Cup ruing a horrible loss to Uruguay. The rugby gods are mortal after all.

Four tries, three yellow cards and a contentious TMO decision – and that was just the first half of utter, glorious bedlam in Oita. 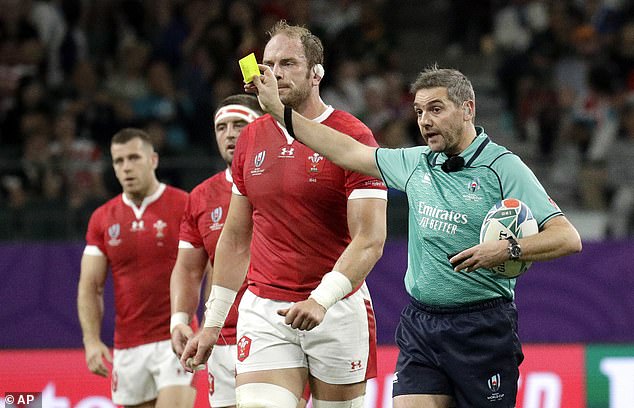 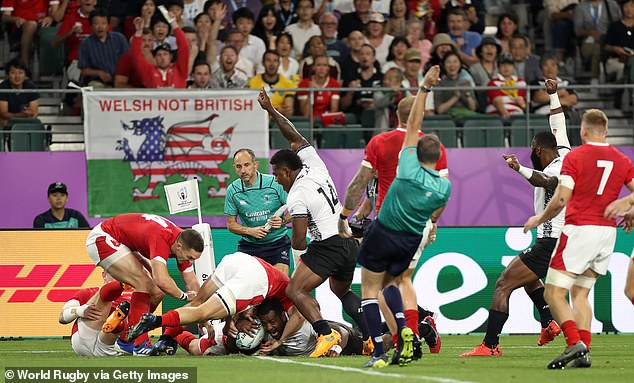 So what was the idea for Wales? Start fast? They were 10-0 down after nine minutes. Do not get dragged into the ‘excitement’? They were throwing risky passes and panicking. Put in an 80-minute defensive performance as Shaun Edwards demanded? Wales had made just 76 per cent of their tackles come half-time.

Keep your heads? Ken Owens was sent to the sin-bin for a tip-tackle eight minutes in.

Before the match had lasted double-figures of minutes Wales were already tasked with completing their joint-biggest World Cup comeback. Only in 2015 were they 10 points down – 16-6 to England at Twickenham – and won. That day it was 28-25, and they were the underdogs, but here it was tail-between-legs time as the clear favourites.

How did it all happen? Well, inside two minutes Leone Nakarawa – the sensational second-row – threw an other-wordly offload to Dominiko Waqaniburotu the captain. He surged on through the broken red line. Tone set. A try was soon to come.

When Wales were offside from Jonathan Davies’ clearance kick Fiji had a scrum with a big blindside. Josua Tuisova – their Mr Muscle – steamrollered Josh Adams, Dan Biggar and Josh Navidi and completed a one-handed finish. Incredible.

Then Wales thought they had scored, with North picking up a loose ball and feeding Navidi, but Hadleigh Parkes had dislodged the ball forward with his hit. 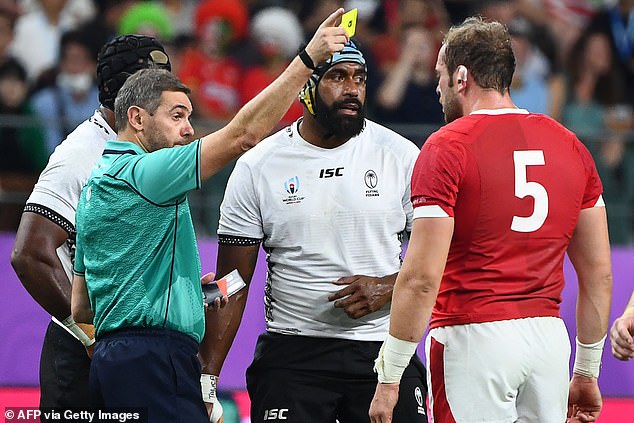 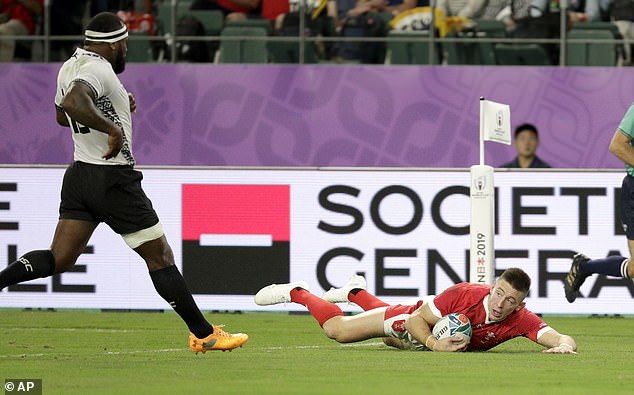 He was next to be flattened at the other end – Bill Mata pole-axing him after a dodgy hospital pass. That calm, collected, wise-headed Wales we have come to know were flustered beyond belief.

And then Owens tipped Mata over onto his back as he passed to Semi Radradra, and was yellow-carded. That pass was forward, so Radradra did not score, but then Fiji did again.

Radradra, another freakish athlete in this team of superstars, popped to Murimurivalu who laid out Adams – poor bloke – and scored. Both conversions were missed by Ben Volavola – and that was Wales’ only saving grace.

The Flying Fijians they call them – this lot were on cloud nine. Edwards’ Six Nations Grand Slam-winning defence was being strewn across the island of Kyushu.

But then Fiji were down to earth with a bump. Tevita Cavubati shoulder-charged a ruck. Yellow.

Biggar was shouting, screaming, cajoling referee Jerome Garces as much as he could, asking the Frenchman anything – and with ball in hand liked the kick trick. The next was blocked, but Wales had a penalty and took a scrum. 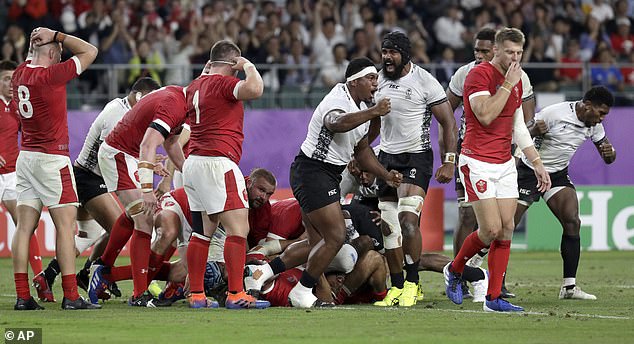 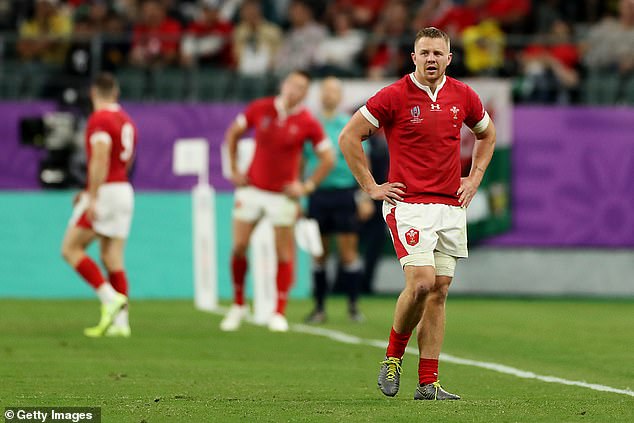 They fizzed it blind to Adams who leapt in. Or did he? It was like a re-run of Mark Cueto against South Africa in the 2007 World Cup final – and the decision went the same way, to the defence.

TMO Ben Skeen saw clear evidence that Adams was out. It was so tight.

Never mind, Wales battered on. Fiji’s discipline was starting to tell and after a fourth penalty concession in a row flanker Semi Kunatani was shown a yellow card for straying offside on his own line.

Now back to a full compliment, Wales made it count and Adams scored again. Zero to hero. With two Biggar conversions they now lead by four, and could take a huge intake of breath after a bonkers half.

That was the only comfortable rest they could take – it would not improve after the break. James Davies was sin-binned for having hands in the ruck, Fiji kicked the penalty to the corner and after Cavubati caught Sam Matavesi’s throw trundled it over the line. Garces gave a penalty try as Wales brought it down. They do not just chuck it about, Fiji, they can do that too.

Back behind Wales continued to flap.

Things only worsened when Liam Williams and Biggar went up for the same high-ball, William’s shoulder cannoned into Biggar’s head and the No 10 had to go off for an HIA. 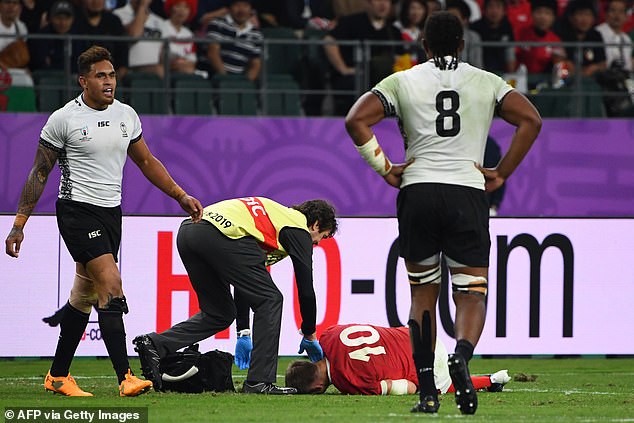 With Biggar off Patchell took the kicking tee, and nailed the next penalty from 45 metres out to level the scores, after Fiji strayed offside.

Time for Wales’ world-class talents to shine through. Jon Davies took it upon himself – he picked a super line through his outside centre channel, beat two defenders and flicked an out-the-back pass an Fijian would be proud of to Adams who – amazingly – took a his hat-trick with a wonderfully acrobatic finish. From where he had started, mowed down early on twice, it was quite the turnaround.

But still there was trouble, as Davies had to limp off, with Owen Watkin replacing him.

Wales were still playing with fire, throwing so many risky passes they never usually try, but when Gareth Davies fed Liam Williams to score Wales’ fourth you felt that – finally – they would ride out the storm.

They did, and as the Fijians looked to the heavens in post-match prayer you wondered just what the deities replied – for all inside the Oita Stadium it was a profound thank you for letting us watch that. 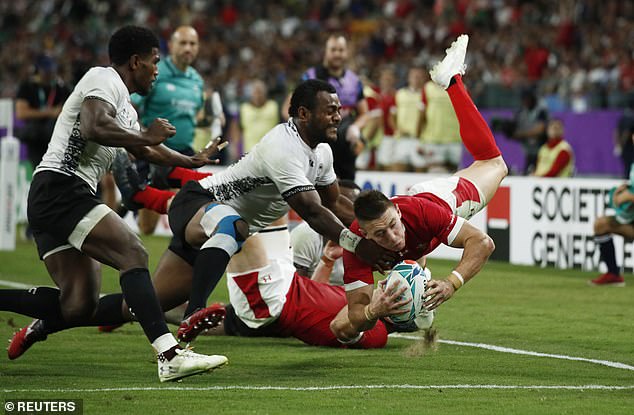 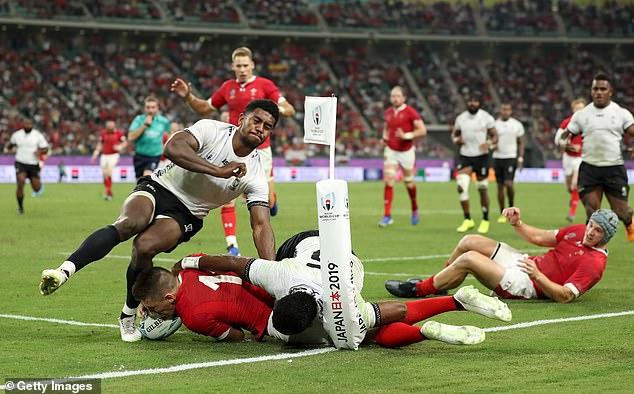 Despite desperate attempts by Fiji to stop the try, they cannot deny the winger his third score 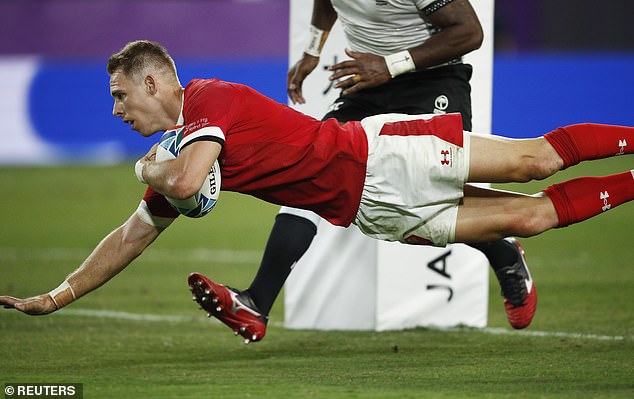 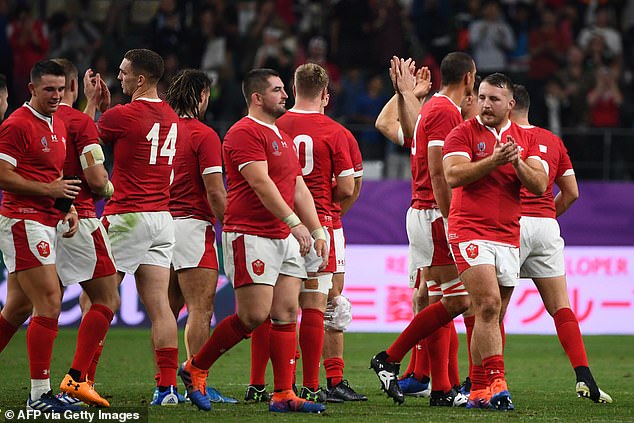