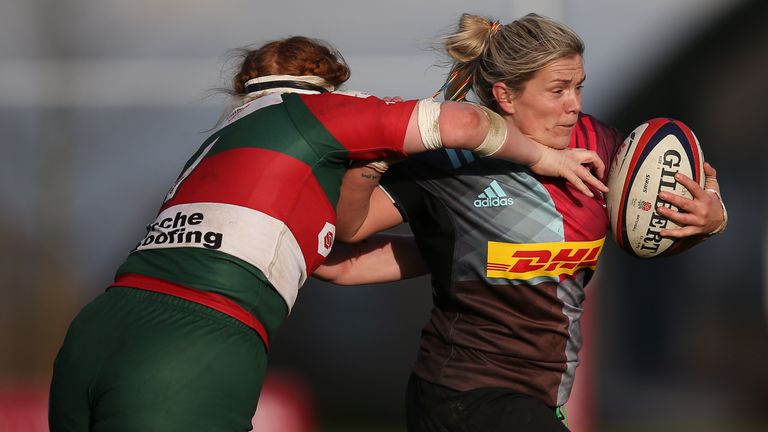 It’s tight at the top as @HarlequinsWomen and @SaracensWomen are only separated by 1⃣ point!

While @WorcsWarriorsW move off the foot of the table with their first victory of the season 🏉#Premier15s pic.twitter.com/vVhN2hWD1i

It was a sweet moment for Clark, England’s most-capped player, as she was playing against her former club. Lisa Martin scored the remaining seven points for Saracens from the boot, helping her side continue their unbeaten run this season. Wasps’ points came from tries by Maud Muir and Abby Dow, plus 11 points from Lizzie Goulden.

Rachael Woosey was the star of the show at the Athletic Ground scoring a hat-trick in the 34-0 win. England captain Sarah Hunter also touched down as did Jennifer Maxwell and Rhona Lloyd.

It was top versus bottom at Surrey Sports Park as Harlequins played host to Firwood-Waterloo. The gulf in quality was clear to see as the table-toppers ran out 81-0 victors.

It was the perfect 10 for Gloucester-Hartpury at the Alpas Arena on Saturday as they ran in 10 tries in a one-sided affair against Darlington Mowden Park Sharks.

Centre Lleucu George kicked three conversions and replacement Ellen Murphy also slotted two. The visitors did have something to cheer about as Liz Musgrove scored a brace in the second 40.

The M5 derby was a tight encounter on Sunday with Worcester recording their first win of the season courtesy of a 15-12 victory over Bristol.

Worcester No 8 Lucy Lockhart scored two first half tries and Carys Cox also crossed over for the hosts. It was a weekend to remember for Worcester Director of Rugby Jo Yapp as she coached the Barbarians to a 29-15 victory over Wales at the Principality Stadium 24 hours earlier.