The Brumbies have wound back the clock before the Super Rugby AU grand final by firing verbal barbs at a Queensland team that will start the match as short-priced favourites.

Dan McKellar’s men are the title holders, have finished top of the Australian conference in four of the past five years and have won 19 of their last 24 matches. 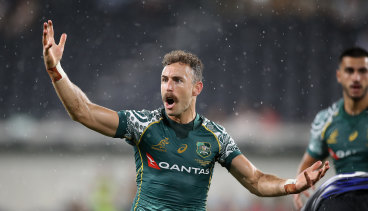 Nic White has lit the fuse for Saturday’s grand final.Credit:Getty

But consecutive last-gasp defeats to Queensland in the regular season mean ACT will start the match in the unfamiliar position of underdogs.

It’s a tag the Brumbies are not only happy to accept but, speaking on Monday, halfback Nic White and coach McKellar both claimed the Reds had made themselves favourites.

Casting aside the modern footballing habit of offering boring platitudes about a rival, the Brumbies appear to be heaping as much pressure as possible on a young Reds team playing in the Super Rugby finals in Brisbane for the first time since 2012.

“I don’t think we have to give ourselves that [underdog] tag. Everyone has a view. Happy for them to have the favourite tag,” White said. 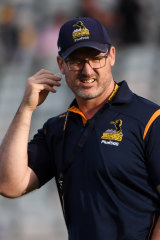 “They have a view it’s their year, it’s their time, but we’ll see on Saturday night. They’re a really good team but so are we.

“We’ve had two ding-dongs this year already and we’re looking forward to going up there and giving it a red hot crack, again.”

McKellar followed White’s lead. “We’re quite happy: Brumbies, backs to the wall, big crowd at Suncorp, just ourselves and our family to bounce off,” he said.

“We’ll go out there and prove a few people wrong and continue our reign as Australia’s leading team over a number of years. That’s the goal.”

McKellar also made the point the Reds aren’t just favourites in the eyes of bookmakers and the general public.

“They’re at home, in front of a big crowd in Queensland and the expectation within their own group is that they win,” he said.

“Individuals have been talking about it. Harry [Wilson] and James [O’Connor] have spoken about it a number of times; that it’s their turn and their time to take over the lead as Australia’s leading side.”

White did not go as far as saying the Brumbies deserved more respect, given their prolonged time at the top of the Australian tree, but his side would be more than happy to spoil the Reds’ party in front of a crowd of more than 40,000.

“We’ve been consistent for a while now down here. They’ve been building for a while. And, like I said, it seems like they’ve been favourites for this competition since the beginning – since before Super Rugby and throughout it,” White said. “And they’ve shown why. They’ve lost one game and played well all year.

“They’re a good side. But we feel like we’re a pretty good team, too. We’re looking forward to it.

“We’re happy for them to be favourites. There is a feeling that everyone wants them to win, needs them to win.

“If we have to go up there and play the game of spoilers, we will. There’s a reason this game is being played. There are two teams out there on Saturday night.

“And while we’re underdogs, that maybe free’s us up a little bit to play some rugby and put them under a little bit more pressure than they already are.”