Home » Rugby Union » ‘Then I got a tap on the shoulder’: Lolesio on why late Quade drama helped him

Noah Lolesio says not knowing he would wear the No.10 jersey against England until 10 minutes before kick-off was a blessing in disguise, having helped him stay relaxed until an unexpected tap on the shoulder from coach Dave Rennie.

Lolesio recounted the crazy circumstances that saw him rushed into the starting five-eighth role in Perth, which began with Quade Cooper feeling a twinge in his left calf late in the Wallabies’ warm-up. After consulting with medical staff, Cooper was withdrawn.

Lolesio had been preparing all week for a role on the bench and expected to see just 10 or 15 minutes of game time at the end of the match.

“I was pretty shocked when ‘Rens’ (Rennie) tapped me on the shoulder and told me I was starting. It was unfortunate for Quade, it would have been a tough call for him,” Lolesio said.

“To be honest I felt a lot more relaxed before I was told I was going to start. So I think that kind of actually helped, to be honest. I just grabbed it by the horns and tried to do my best for the team.

“Prepping for the game, obviously I go over my knowledge and my detail and then hoping I would get 10, 15, 20 minutes and then I got a tap on the shoulder that I was starting. It took me a while to find my groove in the game but I am just happy we got that win.” 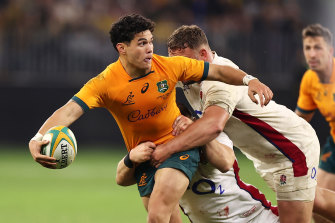 Noah Lolesio passing the ball after a late call-up.Credit:Getty

After a turbulent professional career, Lolesio turned in an assured performance that belied his 22 years and a chequered history under the unforgiving spotlight of Test rugby. Reuniting with his Brumbies halves partner Nic White, Lolesio distributed early to Samu Kerevi, challenged the line and, crucially, kicked six from six from the tee for a decisive 15-point haul.

The win helped erase the memory of a poor field goal choice late in the Brumbies’ semi-final defeat.

“Obviously that semi-final sucked. My professional rugby career has been a rollercoaster and it is pleasing to know there is a bright side,” Lolesio said.

“I feel like I am learning every game to be honest. I am still so early in my career, I am 22, I am taking learnings wherever I can. 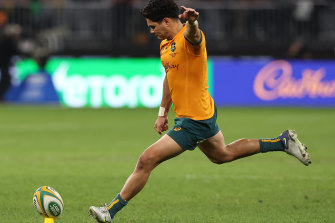 Lolesio didn’t miss a goal in the two-point win.Credit:Getty

“I probably take some confidence out of that but at the same time I won’t be complacent either. I won’t just sit on my bum and applaud it. I know I have to be a lot better, especially in that first half, to put the team in a better position. But yeah, it is pleasing to know I have what it takes to put in a performance like that.”

Lolesio said the biggest positive for the Wallabies was their ability to listen to Rennie’s instructions at half-time and make the necessary changes to their game.

“Rens spoke to us at half-time about in attack just be more direct and be more dominant with our carry and clean, which gave us nice clean ball for the likes of Samu, Lenny [Ikitau] and Marika [Koroibete],” Lolesio said.

“It is pleasing to know when we got told a message at half-time we can do it in the second. But in saying that, we were far from perfect and we have to be a lot better next weekend.

“It is a three game series, we won the first one but we’ll park that and tomorrow we’ll review and preview the game thoroughly and put our best foot forward for Suncorp.”

Watch every match of the July Test Series on the Home of Rugby, Stan Sport.