The sweetest memories: Rory Lawson on win over South Africa in 2010

The sweetest memories: Sprinkle of sugar and wise words from Papa Bill helped Rory Lawson inspire Scotland to beat the world champions in 2010

It was the most powerful of bequests. It carried love, support and encouragement and came in the shape of a poke of sweets.

‘A bag of Hawick Balls, to be precise,’ says Rory Lawson whose pedigree would win him first prize at rugby’s Crufts.

He followed his father, Alan, as a Scotland scrum-half, and has now picked up the microphone wielded to extraordinary effect by his grandfather, Bill McLaren. 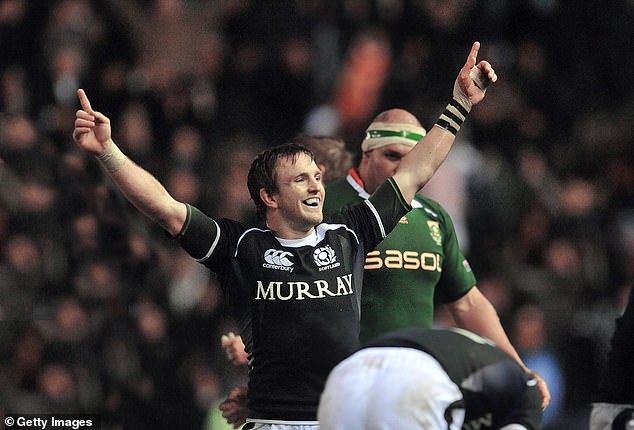 ‘My father gave me the passion and the commitment to rugby, and that was Papa’s gift too,’ he says. But there was also the matter of the bag of sweets.

In November 2010, Lawson was named captain for the match against South Africa at Murrayfield. It was his first game back from a hand injury. Scotland, too, had been routed by the All Blacks the previous weekend.

‘On my day off that week I went down to Hawick to visit Nana with my mum. Papa had died earlier that year and we went to his grave and had lunch. Just talked about him.

‘On the way back to the house I bought a bag of Hawick Balls on the spur of the moment. I had to give my first captain’s talk on the Friday night and I was just s****** it. The dressing room had guys like Chris Paterson and Nathan Hines in it.

‘So I took out the Hawick Balls and told the boys my grandfather had always carried a bag when he watched games or training. He would say to a back: “Here, have one of these. It will give you an extra yard of pace”. Or he would say to a prop: “Take one, you need an extra two yards of pace”.

‘The point I was making was that to beat South Africa we had to be half a second, half a yard quicker than them in every area. If we could do that, we could beat them.’ The then world champions were beaten 21-17 on a rain-soaked Murrayfield.

The sweets were an unlikely physical legacy but Lawson’s debt to his family is not just enshrined in action as a professional scrum-half, but also held in memory.

‘We used to go down to Hawick to Nana and Papa’s house a lot as kids,’ says Lawson. ‘It is on the hill above Wilton Park. Papa at the time still had keys for the school sheds there. There was everything in it: tackle bags, hockey sticks, balls. We used to go down there and throw skimmers in the river, then we would go across to the shed and throw some rugby balls about and hit some tackle bags.

‘Yes, we were born into a family where rugby was a big thing but had we chosen any other sport then Nana and Papa, mum and dad would have supported us in the same way. But their enthusiasm for rugby carried over on to us. Basically, they just wanted us to go out and play.’ Lawson went on to play for Heriot’s before going professional, turning out for Edinburgh and Gloucester and earning 31 caps. 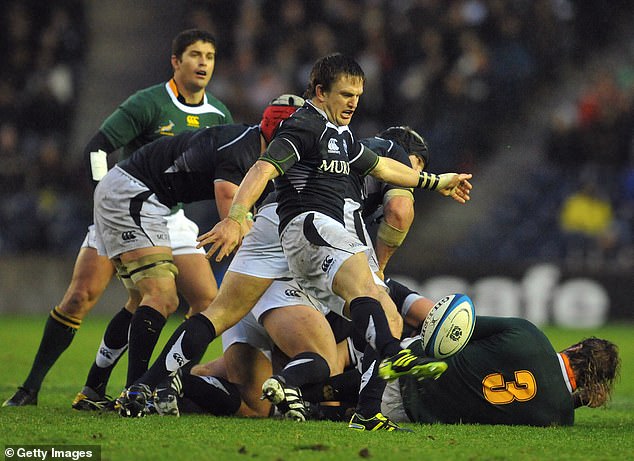 Lawson was named captain for the match, which was his first back after suffering a hand injury

‘He was very proud when I was picked for Scotland,’ adds Lawson of his grandfather. ‘Of his 51 years in broadcasting, only five or six years were in the professional era. His key message was enjoyment.

‘He gave me his full backing, he believed in me. He wanted the best for me. He wanted me to love the game and not let the fact that it was a job get between that and that joy. I lived by that.

‘You have tough games, you play badly but in amongst all that you have to find enjoyment.’ His grandfather’s legacy lives on, too, in the Bill McLaren Foundation. It will be one of the beneficiaries of the ‘Best-Seat-in-the-House’ raffle organised by Tennent’s Lager. The prize is a seat beside Lawson for the autumn Tests.

The competition rolls back the time for Lawson who had his special place at the national stadium as a child.

‘I have vivid memories of being at Goldenacre watching dad play for Heriot’s when I was three or four but Murrayfield has a strong hold, too,’ he adds.

‘Papa had debentures in Murrayfield, section 17. I was going there from about seven or eight onwards. We would be able to turn round and look at him to give him a wave before the match.’ No further contact was made until after the match. McLaren had to put a lot of work in to appear effortless. ‘I remember listening to him on the television as a boy but as I grew I realised how much he put into it,’ explains Lawson.

‘His preparation was legendary. In an era before Google or club websites, he would be working off annual journals, visiting clubs, talking to players and kit men.’ McLaren would compile his ‘big sheets’ and ‘deck of cards’ that carried information and statistics on all the players and teams.

‘What he did was an art form and one he developed across 50 years of broadcasting,’ says his grandson.

Lawson has taken this work ethic into his role as lead voice for Premier Sports’ coverage of the Pro14. His move into broadcasting has grown from studio punditry, to pitch-side interviews to the role as match commentator.

He never asked his grandfather specifically for broadcasting advice as he was not contemplating the transition when the great man died in 2010. But he says: ‘I was incredibly fortunate to grow up watching the best there ever was do what he did and, as a result, I have had a particular passion and interest in broadcasting in general.’ There have also been messages from beyond the grave. ‘It was heartwarming talking to some of the guys at the top of the game in terms of commentary. When I asked them for advice, they all – to a man – told me they had gone to Papa asking for the same.

‘So they have passed that on. So I have had a little bit of him giving me tips though others,’ he says. 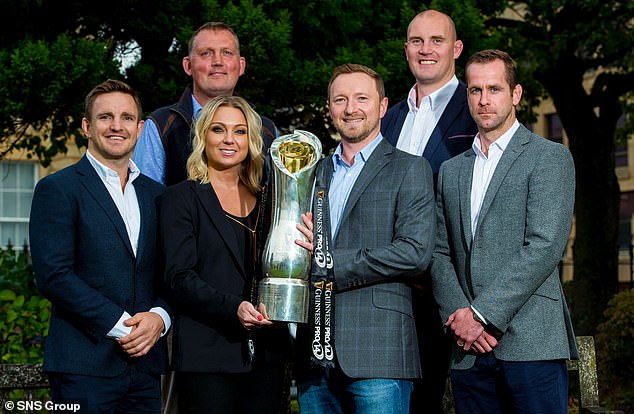 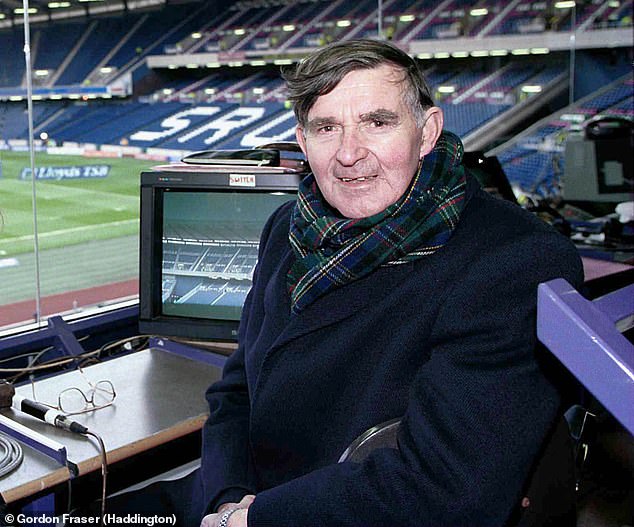 He has picked up the microphone to extraordinary effect like his grandfather, Bill McLaren

The lesson that ‘preparation is king’ has been fully grasped but Lawson makes a pertinent point about rugby, most obviously the modern variety where there can be a wave of phases. He was told by Nick Mullins, the commentator, that rugby could be a repetitive sport. ‘You have to find a multitude of ways to describe basically the same thing,’ he adds.

This is not to disparage the sport he loves but to accept that the bruising battles need not be minutely described but, rather, pertinent information must be added.

He loved playing, he now revels in commentary. ‘It is still early days for me yet but I enjoy learning,’ he says, aware that at 37 a career could stretch in front of him.

His grandfather, after all, was 78 when he laid down the microphone.

Commentary is just one the jobs he now holds. He helps with the Bill McLaren Foundation, which supports grass-roots rugby across Scotland, has a role with the SRU mentoring Scottish-qualified players down south – and runs his own business.

He has branched into the health and nutrition market with a coconut water-high protein drink.

‘I have been doing it for three or four years now,’ he says, adding with a chuckle. ‘Coconut water is the way forward.’ In this, if nothing else, he might find a disagreement with his Papa. There was never anything, after all, to rival a Hawick Ball.

Tennent’s Lager are raffling off Best Seat in the House’ tickets for pitch-side seats with Rory Lawson at the autumn Tests. Proceeds will be split between The BEN and The Bill McLaren Foundation. Raffle tickets can be purchased now until Friday, November 9, for £5 via www.thebestseat.co.uk