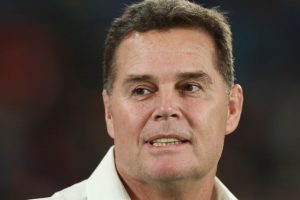 Rassie Erasmus will face an independent misconduct hearing in relation to comments the South Africa director made regarding the performance of match officials in the British and Irish Lions series.

In an unprecedented move, Erasmus was the sole subject of a 62-minute video posted in the run-up to Saturday’s second Test, where he criticised referee Nic Berry and television match official Marius Jonker.

Having won the opening Test of the series 22-17, the Lions succumbed 27-9 in the sequel, and Springbok legend Bryan Habana told Sky Sports the video “without a doubt” influenced officials.

“Match officials are the backbone of the sport, and without them there is no game,” the statement read.

“World Rugby condemns any public criticism of their selection, performance or integrity which undermines their role, the well-established and trust-based coach-officials feedback process, and more importantly, the values that are at the heart of the sport.

“Having conducted a full review of all the available information, World Rugby is concerned that individuals from both teams have commented on the selection and/or performance of match officials.”

The date of the hearing is yet to be decided, though it’s expected to take place after Saturday’s deciding third Test in Cape Town, meaning Erasmus should be clear to lead his team.

The reigning world champions stormed back into the series following their most recent outing, where they outscored the tourists 21-0 in an incident-laden second half.

Each period lasted more than an hour as referee Ben O’Keeffe repeatedly consulted TMO Jonker, much to the chagrin of many fans disappointed that the officiating has become such a spectacle.

Erasmus even pre-empted a potential punishment for his actions and offered to “step away” from the Springboks squad if it was deemed he was in breach of the rules.

South Africa Rugby acknowledged the summons in a brief statement on Twitter, which read: “SA Rugby has noted the charges brought by World Rugby and will respond through the designated channels. There will be no further comment from SA Rugby until the process is complete.”