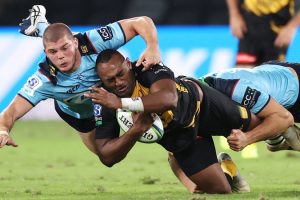 If Waratahs coach Rob Penney wasn’t already clinging to his job by his fingernails, he certainly is now.

The Waratahs fell 20-16 to the Force at Bankwest Stadium on Friday night, earning the unwanted tag of being the first team to lose to the Force since they returned to Super Rugby. It’s the first time the Force have won a Super Rugby match in 1329 days. 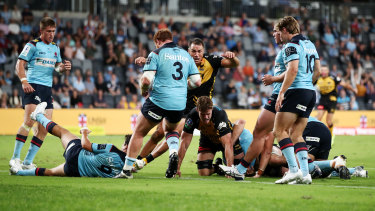 Tim Anstee of the Force goes over for his crucial try.Credit:Getty

Penney entered Friday’s match with his job all but on the line against a Force side that had not won any of its nine matches since returning to Super Rugby.

It may not have been a must win in the same way matches are at the pointy end of the season but if Penney wasn’t able to conjure some signs of life from his side, he would be as good as a dead man walking.

It was very clear very early on in the match that there were indeed signs of life.

The Force had more than their fair share of early ball but many carries were met by brutal hits from a NSW side that had their backs pressed firmly against the wall all week. 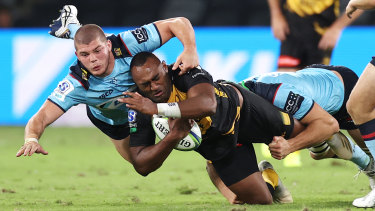 Tepai Moeroa was the man behind the majority of those hits and his direct work with ball in hand was damaging, too.

The former Parramatta Eels forward wasn’t the only NSW player that aimed up.

Carlo Tizzano attacked the breakdown with typical ferocity. Jack Dempsey was the alpha dog leader the NSW pack needed. Hugh Sinclair was a welcome injection in the second row.

Will Harrison had his best game of the season. Penney’s decision to push Jack Maddocks to the wing and Mark Nawaqanitawase paid dividends.

Individually, all of the above players did as much as they could to try to steer the Waratahs to a desperately needed win.

When hooker Dave Porecki crashed over in the fifth minute at the back of a rolling maul, Penney’s prospects were on the rise.

The Force had 69 per cent possession in the first half but their attack was reminiscent of the first-round loss to the Brumbies.

It was structured, stale and easily dealt with by NSW.

That was until Anstee split the line, found Fergus Lee Warner and he slammed the ball down through a James Ramm cover tackle.

The towering lock’s try turned the momentum of the match.

When play resumed, Anstee added a try to his try assist late in the first half.

The former Australian Sevens forward was placed at halfback for a Force lineout five from the Waratahs’ line, swooped around the back, crashed through a tackle, reached out, scored and gave the visitors their first lead of the night after 53 minutes of action.

With 20 to play, NSW still trailed 17-13. Poor hands from Ramm blew a pair of golden opportunities to put the home side back in front but the Force were far from over the line.

That was crystalised when Ready punched Sinclair in the head.

The Force would have to defend their four-point lead for the final 16 minutes with 14 men.

But one last push inside the Force’s 22 was thwarted when an Alex Newsome pass drifted forward.

Many Waratahs fell to the floor. Penney’s stocks are now on the same level.