Within 12 hours Matt Toomua went from waking up in Leicester to flying home to Australia.

The new Melbourne Rebels five-eighth was always heading to Victoria but that move was expedited after starting five-eighth Quade Cooper was concussed in the win over Queensland Reds last Friday.

With his Leicester side safe from relegation, Toomua was able to head to Melbourne a week early and he joined training on Monday, and he could come into the side for the clash against the Bulls at AAMI Park on Friday night. 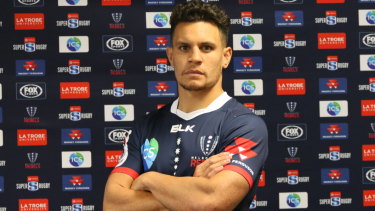 Matt Toomua has wasted no time in fitting into the Melbourne Rebels. Credit:Melbourne rebels

"I woke up at 9am, by 11am my flight was booked and by 9pm I was on the plane so it all happened super quick," Toomua said on Tuesday.

"I was living out of an Airbnb and out of a bag in Leicester so I zipped up the bag and jumped on the plane.

"It's the warmest session I've had in a year's time. It's nice going for a kick at 19 degrees – they almost cancel training over there in that heat."

Cooper was seen working on his kicking on Tuesday and will need to pass a fitness test on Wednesday to be considered for selection.

"Quade's injury was in a sense the impetus," Toomua said.

"He might be fine anyway but in terms of coverage, at Leicester we're safe from relegation so it was a nice fit, a perfect storm in a way."

Cooper and Toomua will battle with New South Wales star Bernard Foley for the starting five-eighth role for the Wallabies at the World Cup later this year but, for now, the two playmakers will be both pushing the Rebels towards their first-ever finals berth.

Unfortunately, Toomua arrived too late to be eligible to play Super Rugby finals.

Toomua has played all season with Leicester so he is match-fit and ready to contribute, even if Cooper plays on Friday night it’s likely the Rebels will name Toomua on the bench as cover.

"I've been going for 30-40 odd weeks now so in terms of time-zone changes in terms of playing international rugby you get used to it.

Toomua is using is jet lag for extra study sessions on the team's attacking shapes and set pieces while learning names is his next big challenge.

Toomua and his wife, Australian cricket star Ellyse Perry, both moved to Melbourne to continue their sporting careers with Perry already based in Melbourne for the past two months.

"I came from the airport straight here [to AAMI Park] and I didn't know how to get home on Monday night," Toomua said jokingly.

"I had to go through my emails to find the address as my wife picked out the place we are living in.

"I took the train in this morning [Tuesday] so I feel part of the community straight away."

As you would expect, none of the commuters on the train recognised the Wallabies star and he was happy to sink into the crowd.

"The good thing about coming to Melbourne is that I could wear a full Rebels kit and people would just think I was a big fan so I'm pretty happy about that," Toomua said.

While Toomua will only have a supporting role with the Rebels in their remaining five games, he will have a much bigger role to play for the Wallabies as the World Cup preparations unfold.

"There is a lot of open positions I guess that's fair enough after the season we had last year as there are probably not too many people who can firmly say I will be wearing a starting 15 jersey," Toomua said.

"But I'm sure that's the ambition of everyone else who plays inside centre or winger or whatever.

The Rebels host the Bulls at AAMI Park on Friday at 7.45pm.