Home » Rugby Union » Mana, mischief and Marika: The hidden side of a Wallabies superstar 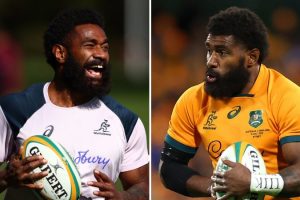 There were nine minutes left in the Wallabies’ clash with Argentina when coaches wanted to remind Jake Gordon he was now captain.

It had all been arranged. When James Slipper and Nic White both left the field, Gordon would do the duties. But to doubly confirm, staff on the sideline told Marika Koroibete and Len Ikitau to run in and tell him.

Ikitau did, but then Koroibete ran in and followed up with a second message.

“Jakey Gordon,” Koroibete said. “I am captain, you vice-captain.”

Koroibete jogged back grinning and, with the Test still in the balance, Gordon was baffled. The story brought the house down during the Wallabies’ celebration drinks afterwards.

“Just only me knew about it,” Koroibete laughs, when asked about his promotion to Wallabies captain. 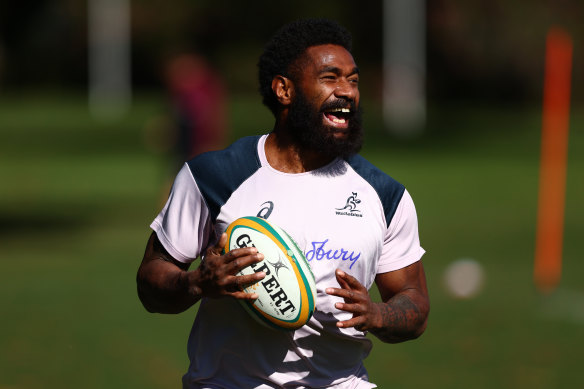 All smiles … a laughing Marika Koroibete at Wallabies training.Credit:Getty

“Jake didn’t know what to think.”

You know all about the on-field Marika Koroibete, the power athlete whose range of in-game impact ranges from standard dominant up to insanely dominant.

But the off-field Koroibete has always been a far tougher read, given his seemingly quiet — bordering on shy — nature.

Ask around the Wallabies camp, however, and even his new club in Japan, and stories like the captaincy coup abound. Stories about the ‘other’ Marika, a mischievous and much-loved teammate. 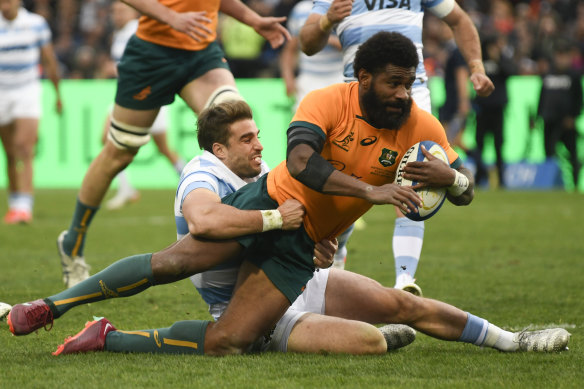 Marika Koroibete dives over for a try that was disallowed.Credit:AP

“He has what I would describe as a lovely Fijian character,” Robbie Deans, the former Wallabies and now Panasonic Wild Knights coach, says. “They’re not verbose but he has a glint in his eye.”

Wallabies assistant coach Scott Wisemantel adds: “He watches everything and as well as being very good on his rugby knowledge, he sees traits or characteristics in people and is not afraid to use them to extract the piss of his mates at the appropriate time.”

Sitting down with the Herald and The Age in Mendoza, Koroibete confirms he is not as quiet as his public persona might suggest.

“I am not a guy who likes to talk a lot. I only talk with people I am comfortable with or in a small group,” Koroibete says. 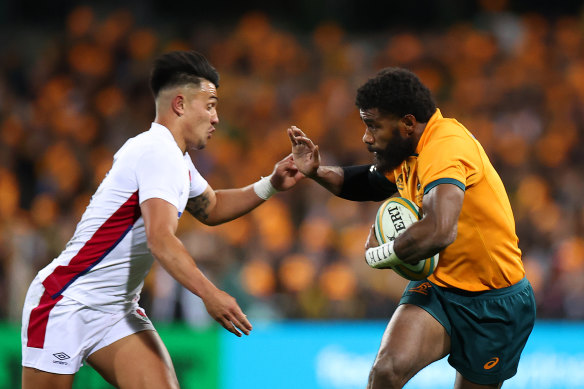 “But when you get to know me, I am pretty funny and in the Wallabies I am pretty comfortable. They’re a bunch of good men, and good coaches. There are plenty of good characters.”

Stories like Koroibete claiming the captaincy shine a light on why the 30-year-old is, within a team environment, valued almost as highly off the field as he is on it. Almost.

But the curious part about the story is maximising leadership has actually been on Koroibete’s mind in recent times. The 46-Test wing holds no ambition to be a captain, nor to even give a team talk. He prefers passing on advice with young teammates one-on-one. But he says he has also had chats with Dave Rennie about adding the last few per cent and becoming more vocal on the field.

“It is something I have to work on, but my way has been to lead by example,” Koroibete said.

‘You don’t always have to talk, you can sometimes just do, and that’s a form of leadership.’

“That’s the way I have done it. The way I train and the way I do things in the game, then hopefully that is a good example for young kids. You don’t always have to talk, you can sometimes just do, and that’s a form of leadership.”

Rennie, for the record, furiously agrees. If ever there is a player who qualifies for a “keep doing what you’re doing” pass, it’s Koroibete.

You won’t get too much argument about the flying winger vying with Michael Hooper as, consistently, the Wallabies’ best player over the last four or five years. His outstanding form in the England series encapsulated Koroibete’s critical importance to the Wallabies’ chances of victory in any given Test match.

In his former life as an England assistant coach, Wisemantel said preparing to beat Australia was heavily focused on shutting down the former NRL winger. 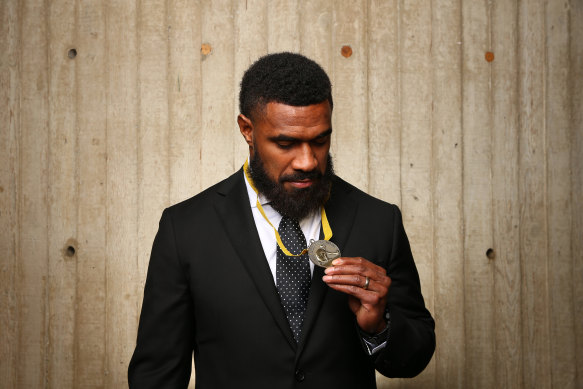 Marika Koroibete with the John Eales Medal in 2019.Credit:Getty Images

“But it was difficult. You just don’t know where he is going to pop up,” Wisemantel said.

The encouraging part for Wallabies fans is that Koroibete’s form in July may be a hint that the 2019 John Eales medallist has his best ahead of him.

Koroibete moved to Japan last year to play under Deans at Panasonic, and it won’t surprise you to learn the Wild Knights won the League One title with the Wallaby playing a significant role.

The move has also refreshed him and, with far less travel and the ability to be at home with his wife Emma and three sons (Iliesa, Joshua and Immanuel), has Koroibete happier than ever.

“The boys love it and Emma loves it as well,” Koroibete said. “Just the different culture and the different environment, and we get to spend a lot more time together as a family. It is a one-day trip, go to the game and come back. Playing with the Wallabies and Super Rugby, it was a fair bit of travelling. It was getting to me a bit in the pandemic, being away from home for a while, being away from home for four or five months.

“I get to be home and help Emma more, and do a lot more father duty with the kids.”

Speaking to the Herald and The Age from Japan, Deans said he had admired Koroibete for a long time, and watched him plugging away for years with the Melbourne Rebels.

“He has loved it here, and that’s what I wanted for him because just watching from a distance he clearly loves the game but he was trying to carry a team and not getting a lot of reward for it,” Deans said. 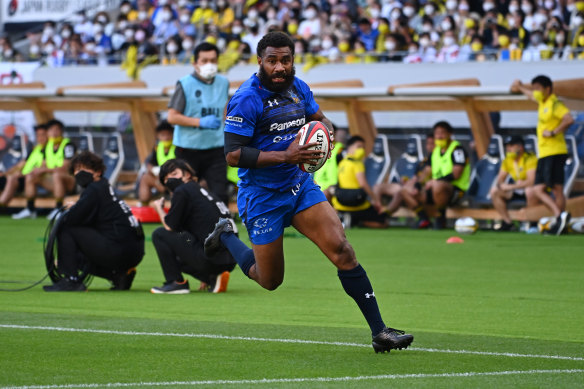 Marika Koroibete in action for the Saitama Panasonic Wild Knights during the Japan Rugby League One final.Credit:Getty

“I just wanted to give him the opportunity to enjoy his rugby, really.”

Deans issued Koroibete a similar “just play” pass, but says his skills have been polished in Japan simply due him getting many touches in Top League games and in training.

Deans was surprised to see how much of a “genuine freak” Koroibete is in the gym, and now understands the reasons behind his longevity in several codes. But Deans says he has also sought to manage his workload, to keep him fresh.

The Wallabies days are well and truly in the past for Deans but all of the above is paying dividends for Australia, as well as Panasonic. 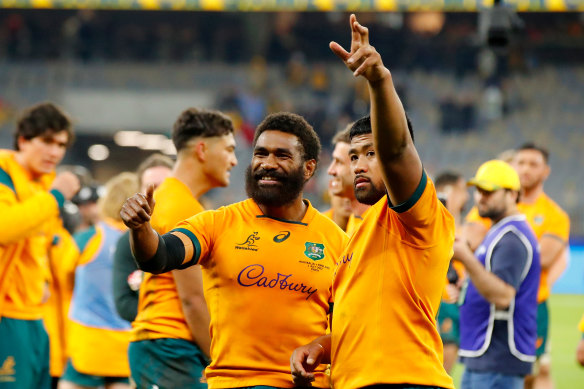 Marika Koroibete and Folau Fainga’a celerate after victory in Perth.Credit:Getty

Koroibete said he held no expectations about playing for the Wallabies ever again after leaving last year. He knew it was a possibility under the Giteau Law but had made peace with the equation that a move to Japan could mean he would not play Test rugby again.

“I was just honoured and so blessed to be picked as one of the three guys coming in,” Koroibete said.

“I thought I had done my time with the Wallabies when I went to Japan. But when Dave Rennie called me up to come home it was a big honour.”

If there was ever a smidgen of doubt about Koroibete getting one of those three spots, that’s done with now. Even if Samu Kerevi and Quade Cooper are fighting fit, Koroibete will be the first picked for the 2023 World Cup. 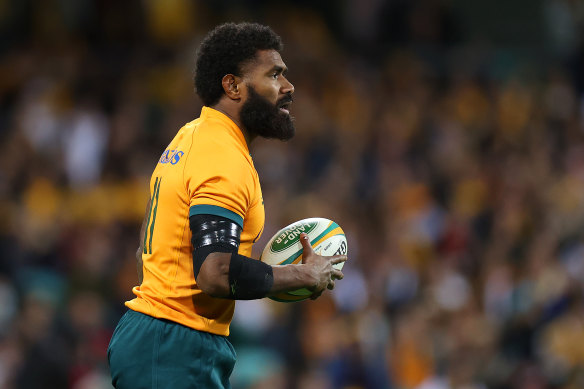 First choice … Marika Koroibete will be a star for the Wallabies at the World Cup.Credit:Getty

Through his deeds, his words and his occasional gags in the Wallabies environment, as soon as Koroibete sets foot in camp, his immediate standing among the rest of Australia’s best players tells the story.

“How you would describe Marika is that he is a guy who has a whole lot of ‘mana’,” Wisemantel says.

“In the [Pacific] Islands, ‘mana’ is not the words you speak but the presence you give off, in what you do with your actions.

“Marika, with this team, has a huge amount of ‘mana’. It is not just that follow-me aspect, but also because he cares and you see through his actions how much he cares. When we lose, he genuinely hurts. And when we win, well, look out.”

Wisemantel signs off with another Marika story.

“After he had that try disallowed (in Mendoza) due to a forward pass, Marika is running back and he goes ‘the Bunker hates me’,” Wisemantel laughs.

“I don’t think he realises there is no bunker in rugby union.”

Watch every match of The Rugby Championship on the Home of Rugby. Continues this weekend with South Africa v All Blacks (Sunday 12.30am AEST) and Argentina v Wallabies (Sunday 4.45am AEST). All matches streaming ad-free, live and on demand on Stan Sport.