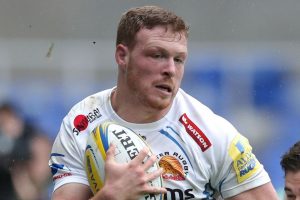 Warren Gatland was left sweating on an injury to Sam Simmonds after Exeter came back from the dead at Northampton.

The British and Irish Lions head coach hoped replacing crocked prop Andrew Porter with Kyle Sinckler would be the extent of his Sunday chores.

But Chiefs star Simmonds limped off at Franklin’s Gardens after trapping his left ankle in a tackle and headed home with it cased in ice.

Exeter boss Rob Baxter said: “I don’t want to make a call on his bad it is, I’d just be saying stuff I should not be saying.

“He won’t want to be cotton-wool wrapped for the Lions. Sam likes playing, he doesn’t think rest suits him – but if his ankle isn’t right, it isn’t right.”

Simmonds’ scare was the one sour note for the champions as they staged their biggest ever Premiership comeback to stay on track for a home play-off semi-final.

They had trailed 18-0 at half-time to opponents reduced to 14 men after David Ribbans’ early red card for a shoulder to the head of another Lion, Luke Cowan-Dickie.

It was then Baxter sat them down and challenged them with the question: Do you actually want to win this game?

Outside, the Gardens were rocking, 4,000 fans rubbing their eyes in disbelief at what they were seeing.

They had played for nearly half an hour a man short against the champions yet suffocated them at the breakdown, denying them any quick ball.

Rory Hutchinson claimed a try either side of Ribbans’ 14th minute dismissal, the second an absolute peach, latching onto Dan Biggar’s exquisite chip and kicking through two defenders to collect and score.

Biggar added penalty and a drop goal to hammer home Saints half-time advantage and prompt Baxter to demand his side stop adapting their game to Northampton’s circumstances and start playing to their own.

“We just probably decluttered at half-time,” said the boss. “At the end of the day when you’re 18 points down at half time you have some very easy decisions to make.

“You’ve got to decide to go out and win the game otherwise you’re just going to roll over and get a stuffing. So we just gave some clarity at half-time in the hope that would allow us to play like we play."

It did that alright as Sam Skinner pulled back a try four minutes after the restart, Stuart Hogg added a second and Stu Townsend came off the bench to score one and make the bonus point fourth for Ollie Devoto.