Kerevi, McMahon just the start: The other Wallabies on RA’s return list 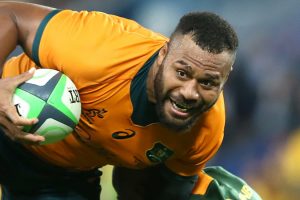 The return of Samu Kerevi and Sean McMahon to the Wallabies fold is just the start of Rugby Australia’s push to field a team capable of contending for the World Cup in 2023.

The Herald can reveal six overseas-based Wallabies have been targeted to be part of the Wallabies’ World Cup campaign in two years as RA prepare to change the Giteau Law criteria ahead of this year’s spring tour.

Sources with knowledge of Rugby Australia’s plans have told the Herald and The Age Kerevi, McMahon, Tolu Latu, Rory Arnold and Will Skelton – have all been targeted as offshore players wanted to line up in the Wallabies’ starting XV at the 2023 World Cup.

Marika Koroibete, who is due to join the Panasonic Wild Knights in Japan at the end of the year, will also have to be selected from overseas to continue playing for Australia.

After last playing for Australia in 2017, McMahon has rejoined the Wallabies this week, where Japan based Kerevi and Quade Cooper are already in action.

The Herald and The Age learned RA has also working on fresh plans to bring Skelton, Arnold and Latu home in the next two years. 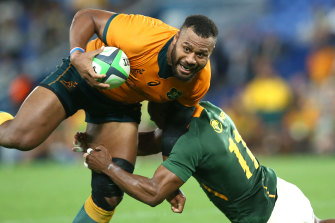 Samu Kerevi has made an immediate impact since returning to the Wallabies fold.Credit:Getty

If that isn’t possible due to financial constraints, the Giteau Law will be amended with one goal in mind: giving Rennie the opportunity to pick the players he needs to ensure the Wallabies can replicate performances like Sunday’s last-gasp win over the world champion Springboks.

In his two years in charge of the Wallabies, Rennie has been consistent in his message that his priority is to pick players who play for Australian Super Rugby clubs.

But COVID-19 has allowed for some wiggle room under the harsh Giteau Law criteria and the immediate impact of Kerevi has changed RA’s thinking. The need for more quality locks is also a consistent problem for the Wallabies, and Arnold was due to return to the Wallabies last season before getting injured. Eighteen-cap giant Skelton has been in dominant form since moving to England, and now France, in 2017.

While the review of the Giteau Law is still being conducted by RA chief executive Andy Marinos and board members Phil Waugh and Daniel Herbert, sources with knowledge of the discussions have told the Herald of the new models being considered. 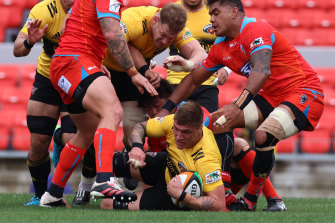 Sean McMahon is due to link up with the Wallabies again this week.Credit:Getty

The most simple of the rule changes being considered is to lower the number of Tests required to qualify for Wallabies selection when based abroad to as few as 15 or 20 Tests.

Sources say another alternative being given strong consideration is a move to a “25 and five” model which would shift the point of focus for eligibility from Test caps to age.

The basis of that model would see any Australian player over the age of 25 who has played five seasons for a Super Rugby club be eligible for selection.

This would allow RA to try and keep the best young prospects who make Super Rugby debuts in their teens – such as Jordan Petaia and Harry Wilson – for more than the first few years of their career, while not punishing players that are stuck behind established stars.

Liam Gill is one example of a player who would benefit from the “25 and five” model.

The only player of the six overseas-based Australians that the Wallabies desperately want for the 2023 World Cup who would not qualify for selection based on that criteria is McMahon, who only played four seasons for the Rebels.