The Australian U20s team, known as the Junior Wallabies, booked their spot in the top four after beating the U20s Six Nations champions 45-17, snapping a seven-game winning streak for the Irish. 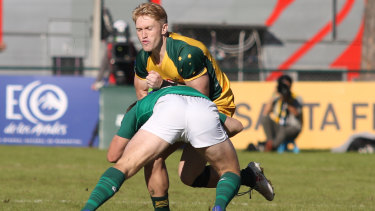 Isaac Lucas on attack for Australia in their win over Ireland on Saturday.

They are still to play England, who were beaten by Ireland last week. But having beat Italy in their first game they will retain top spot in the pool even if Ireland account for Italy and match Australia's 10 competition points. Tournament rules mean that the head-to-head result is the first criteria to split the teams, making Saturday's six-tries-to-two win a crucial one.

The Junior Wallabies fought hard for their win in Santa Fe despite the Irish playing an hour of the match with 14 men after second-rower Ryan Baird was red carded for striking Australia No.10 Will Harrison.

Australia led 10-7 at half-time but Ireland worked hard to score and take the lead 17-10 towards the 60th minute. The Australians, perhaps better suited to rising temperatures in Santa Fe, then made the most of the one-player advantage, scoring five tries in the final 20 minutes.

A three-try rout from the Reds' Isaac Lucas, Warringah's Mark Nawaqanitawase and second-rower Nick Frost in the space of five minutes was the trigger. 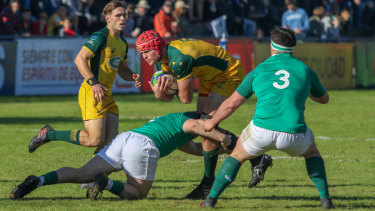 Harry Wilson takes the ball into contact in Australia’s 45-17 win over Ireland.

Harrison then scored to make it 38-17 and Frost, a former Australian Schoolboy who was signed by the Brumbies this year after two years with the Crusaders, scored again to make it 45-17.

"Ireland played with courage today with 14 men and showed why they are the Six Nations Champions," Junior Wallabies coach Jason Gilmore said.

"Our boys had to absorb a lot of pressure with our defence and when we finally got some territory, we were able to convert it into points.

"We now have England in our final pool game and the group will be ready for another tough game."

Junior Wallabies captain Fraser McReight said: "We knew it was going to be a grind and if we played the sort of footy we knew we could play, we would score some points."

Defending champions France and former U20 Championship winners New Zealand and South Africa are also unbeaten, with two bonus-point wins to their names.