‘I want it in writing’: Rugby Australia’s $5 million Bledisloe threat

Rugby Australia has asked New Zealand Rugby for a written guarantee they will get on a plane and play in a rescheduled Bledisloe Cup game in Perth on September 4, and have threatened to pass on a $5 million bill if they don’t.

The Herald can also reveal The Rugby Championship may still be played in Queensland, instead of Europe, after the Sunshine State fast-tracked a proposal to approve South Africa and Argentina’s entry into the country and into ‘managed isolation’.

The Queensland plan has already advanced to the point of venues being secured by Rugby Australia, who have avoided any potential clash with the NRL finals.

“Queensland is absolutely a priority for us. Until such time that we cannot make it work, that’s the priority,” Rugby Australia chief executive Andy Marinos told the Herald.

“We are working very hard to get all the approval and assurances done. The Queensland government have been fantastic in working alongside us.

“There was never any doubt about whether we could play there. It was just doubt that we could get South Africa and Argentina through managed isolation.” 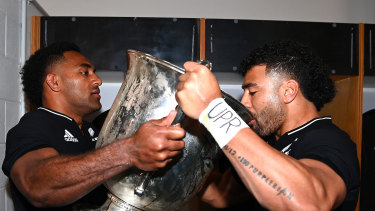 Tensions between Rugby Australia and New Zealand Rugby are at an all-time high.Credit:Getty

While Europe also remains an option, RA will know by Monday afternoon whether they will be able to fly South Africa and Argentina directly into Queensland. That option was not available a few days ago, when the agreement with NSW fell over due to the current strain on NSW Health and NSW Police.

NZR cited the lack of certainty about the Rugby Championship schedule, ahead of a three-month stint away from home, as the reason why they didn’t board a flight for Perth.

RA hopes to lock in September 4 as the rescheduled date for the third and final Test of the Bledisloe Cup series in the next 48 hours. NZR have been asked to provide written assurance they will not again bail on the sold-out Perth Bledisloe.

“I want it in writing. We have an email, but we need a letter for both the government and the stadium as well,” Marinos said.

“That should be forthcoming pretty soon.”

If NZR and the All Blacks conjure another reason not to board a flight bound for Perth and the game is abandoned, the WA government have signalled their intention to recoup the $5 million they paid to Rugby Australia to play the Test in Perth.

Sources with knowledge of the situation have told the Herald that NZR are not directly involved in the contract which took the match to Perth, so the bill would land at Rugby Australia’s Moore Park headquarters.

But Marinos indicated they would duly pursue financial compensation.

“I’ve made New Zealand very aware that we have a contract and they’ve made a commitment,” Marinos said.

“What I am really disappointed about is that they chose to make a public statement on a postponement that involved us, without telling us.”

Meanwhile, Marinos refuted NZR boss Mark Robinson’s claim that the Australian governing body were not blindsided by a media release sent Friday revealing the All Blacks would not board their charter flight bound for Perth.

“At no stage did he communicate on that call that they were about to send a media release. That’s what absolutely blindsided us,” he said.

“As soon as I found out, I tried to phone him, he didn’t answer my call.

“I sent him two messages asking not to make a public statement until such time as we have consulted our stakeholders and I had absolutely no response until 2.30pm.

“I’m not denying the fact they made their position quite clear, I would never deny that, what I am really disappointed about is that they chose to make a public statement on a postponement or cancellation that involved us, without telling us at all.”