Glasgow Warriors vs Edinburgh: PRO14 match postponed due to frozen pitch at Scotstoun 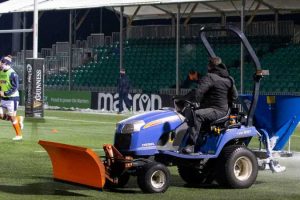 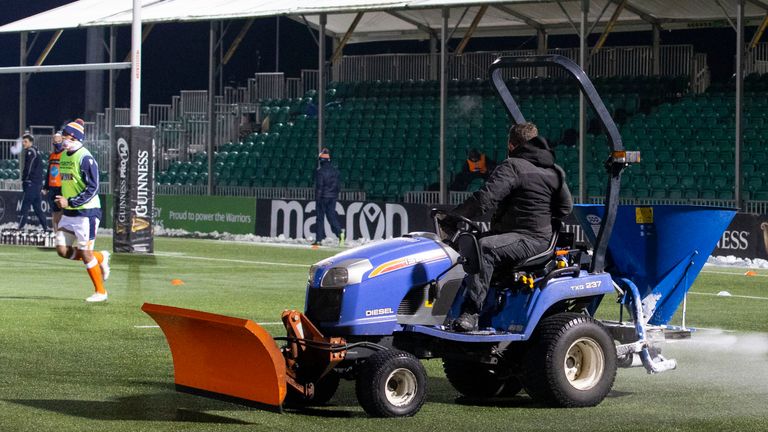 Glasgow Warriors’ PRO14 match against Edinburgh has been postponed shortly before kick-off due to a frozen pitch at Scotstoun.

The artificial pitch at Scotstoun was ruled unplayable as both teams warmed up amid temperatures of about -4C.

The match was originally meant to be played on December 27 but a Covid-19 outbreak at Glasgow forced a postponement. No date has been set for the rearranged fixture.

📰 | Tonight's match against @EdinburghRugby has been postponed due to a frozen pitch.

A decision on when the fixture will be replayed will be made in due course. pic.twitter.com/0fpSK6GWE9

Edinburgh head coach Richard Cockerill said: “The players went out to do their primer, which is just a warm-up before the main warm-up, and a few players were saying the far side was very hard and it was hard to get any purchase.

“The plastic grass on the top was soft but underneath it was very hard and wouldn’t take a stud.

“The ground staff did some work on it and we continued with the warm-up as normal but once we got to scrummaging over on the far side, all the front row players couldn’t get any grip at all, they just slid straight to their faces.

“It was impossible to scrummage on so it certainly wasn’t fit to play on.

“You want to play so you would like to think you wouldn’t get to this point.”

Glasgow had trained on the pitch during the week but temperatures plummeted as night drew in.

Warriors head coach Danny Wilson said: “Obviously we train in the day, not in the night. The pitch was fine this afternoon but as the night has dropped it has got to minus three and the more frozen it’s become.

“As I’ve been told I am 99 per cent sure it won’t be (rescheduled for) this weekend based on the fact that broadcasting is an issue. It will be another game we have to be flexible with.”

Glasgow and Edinburgh both sat fifth in their respective conferences heading into Friday’s fixture.

The teams met at Murrayfield last Saturday, where Edinburgh ran out 10-7 winners.