George North preparing for the biggest year of his life

Not many sportsmen prepare for the biggest year of their life with a bumper holiday and bike rides with their mates.

For George North, of course, it was not just any old mate but Tour de France winner Geraint Thomas, who he met through his fiancee Becky James, the Olympic track cyclist.

With a World Cup and a wedding to come next year and after eight seemingly endless seasons of record-breaking, emotional highs and more recent lows it was time for North to rediscover a life outside rugby in the Welsh valleys. 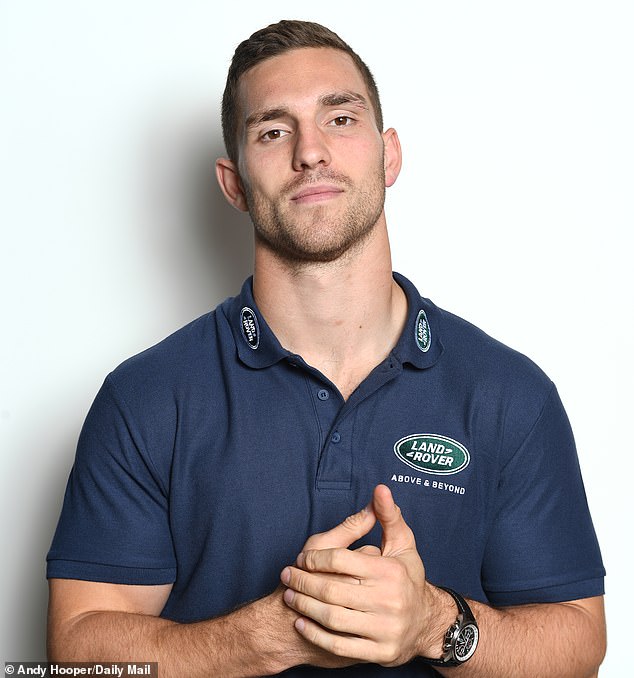 ‘It was funny,’ North told Sportsmail. ‘We stopped at a place for a coffee and a few beers and I said, ‘‘Imagine how weird this looks! Geraint Thomas, who has just won the Tour de France, next to me looking like a burst sausage in lycra!” I was in full kit and his father was too — I thought, “This would be a hell of an image!”’

Soon, Thomas was winding him up — gleefully telling a Welsh rugby podcast just how slow North was in the saddle.

‘He’s been talking s***!’ laughed North. ‘I’m never riding with him now — he’s taking the mickey! He’s not my friend anymore — deleted his number, off the Christmas card list!

North likes bikes with engines too. In the summer sun he rode a KTM adventure motorbike from Cardiff to Anglesey to see his parents – and has a bought a 1979 Yamaha to tinker with in his garage. 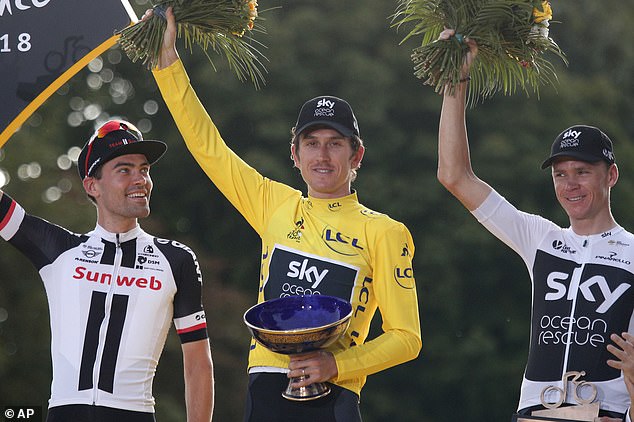 ‘Nothing is ever broken, you’ve got to fix it,’ is the motto passed down from his father. With Wales and Ospreys team-mate Scott Williams he watches MotoGP, Formula 1, touring cars and off-roading events.

He loves riding his bike, explaining: ‘When I put on my helmet, my phone is on silent. No-one screaming, telling you you’re rubbish or what you should do differently.’

There were plenty of touchline observers and keyboard warriors doing just that in his latter years at Northampton Saints.

North — nicknamed the ‘man-child’ but now a 6ft 5in and 17st 2lb man-mountain — felt sporting adversity for the first time.

A career trajectory soaring endlessly skyward, suddenly flat-lined. An injury here, a concussion saga there, 13 league tries in his last three seasons, a club in decline, the ball harder to find and pressure — that old foe — weighing heavily on his huge shoulders. 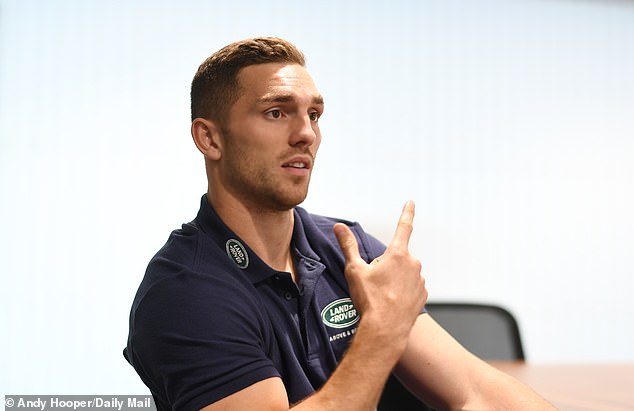 North, an ambassador for Land Rover, said: ‘Naturally, you’ll get times where, through no fault of your own, the squad isn’t going the way or playing the way you want to get the best out of you.

‘Or maybe the team has injuries galore so you can’t do anything. These are the times when you feel it the most because you feel you need to be that guy to deliver.

‘Sometimes you can’t — it is just the way the game is. Expectation is always there.

‘Modern defences force you to adapt. That’s something that will always be with me — people’s expectation and pressure for me to perform. It’s hard to carry, but that challenge excites me and drives me on.’ 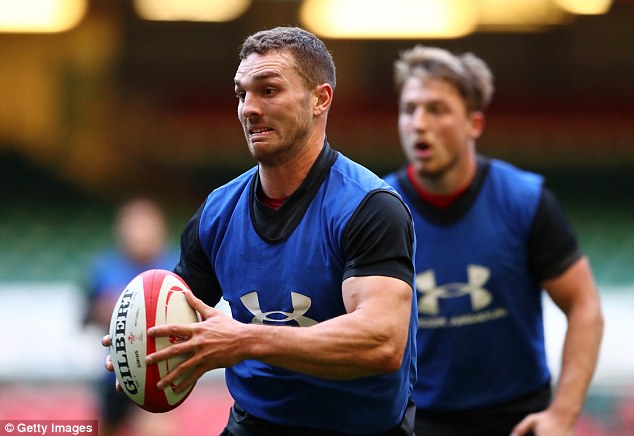 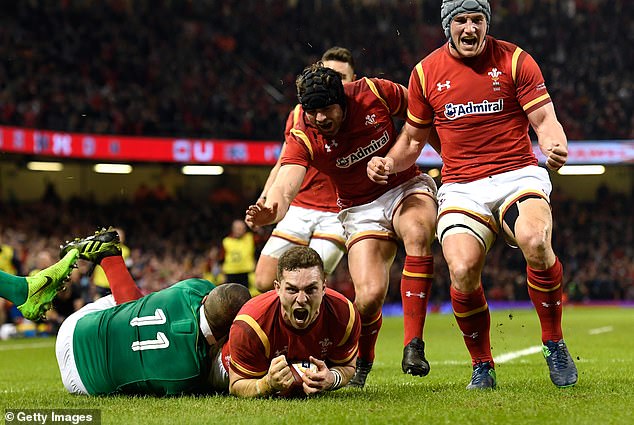 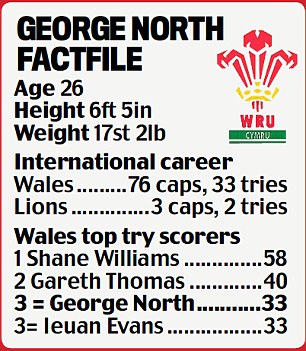 North watched the ‘wildfire’ of his acrimonious exit from Franklin’s Gardens ‘burn’ around him. He was criticised and punished for missing a league match but played for Wales.

He insisted there was no animosity, that he enjoyed his time and finished on good terms — but needed to leave. ‘The Premiership is a huge beast,’ he said.

‘It was awesome, but you have to take a step back sometimes. I thought, “who am I? What am I doing? Where am I going?” I needed to mix things up — it meant coming back to Wales.

‘The bigger picture was the main factor. Rugby-life mix, rotation, times when I could have breaks, go away, take a step back, do a conditioning block to top up if I needed it — having that freedom to benefit myself and the club.

‘It was my first ever summer, so to speak. Becky and I went to Ibiza at the last minute. We went right to the north of the island to stay in the middle of nowhere, which was lovely.

‘I completely chilled mentally and physically for the first time in… well, ever really. It gave me bounce and energy for this season.’ 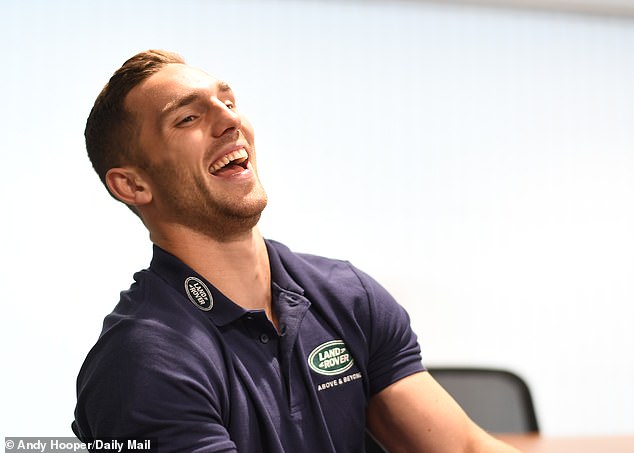 Settled now in Cardiff in what is his soon-to-be marital home, he still has a few boxes to sort through after moving belongings from Becky’s house in Manchester and his own in Northampton. North is also back in the goldfish bowl. With Wales’ autumn Tests against Scotland, Australia, Tonga and South Africa pressure grows again.

‘We came so close to beating France in that semi-final,’ he recalls, with Wales losing just 9-8 despite having captain Sam Warburton sent off after only 19 minutes.

‘It aches, it hurts — and it should. You work your fingers to the bone, run like you have never run before and lose like that. We will use that for what is to come.’ 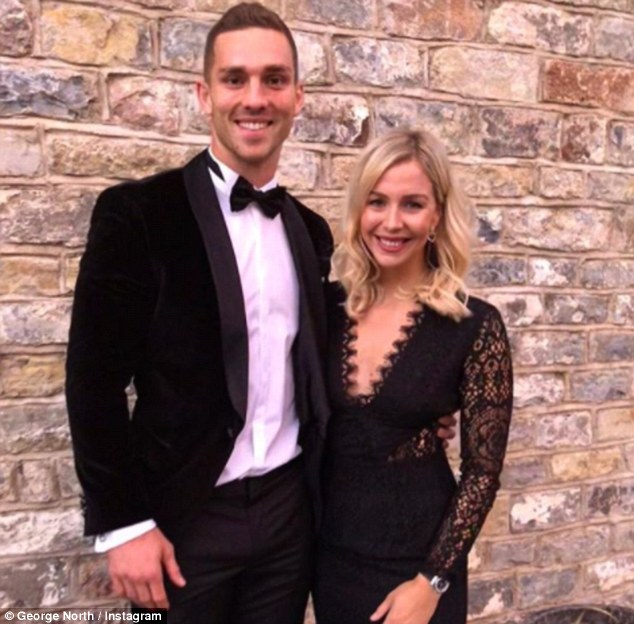 North will marry his fiancee Becky James, the Olympic track cyclist, next year

North has achieved much more than most could dream of but does not yet feel fulfilled.

He has won 76 Wales caps and has set himself a target. ‘I’ve played a long time, but I hope there’s more to give,’ he said. ‘I still feel 18, still take the Michael and still jump out to scare people, wind people up.

‘I’ll keep playing until I can’t. If it gets to a point where I sit back and think I’ve nothing else to do then maybe I will call it a day.

‘A hundred caps is one goal I’ve set myself. If you can get into the 100-cap club you’re in a different level. It is elite.

‘I could then retire knowing I was a half-decent player. When I’m sitting in the corner of a pub with my curry-stained tie on I can always pull out that line!

‘To play once is huge, to do it 100 times would be the best tick I’ve ever ticked in my whole ticking life!’

Revitalised, re-energised — North is out to prove in these times of lengthened seasons, a rest is as good as a change. 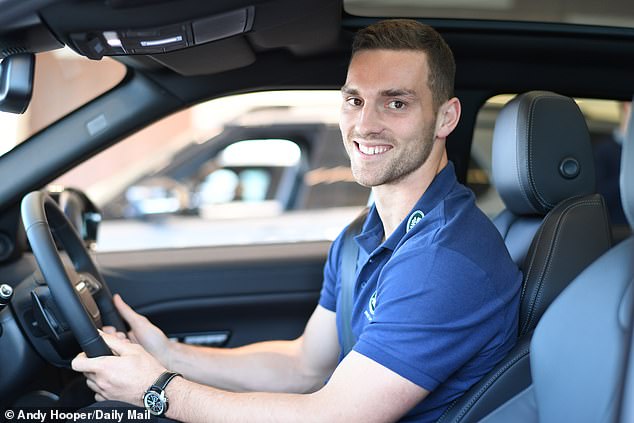 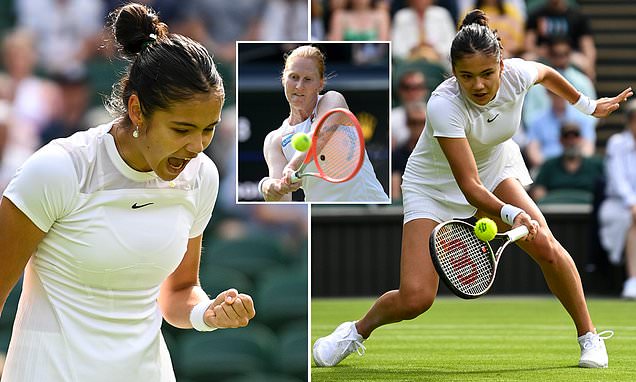 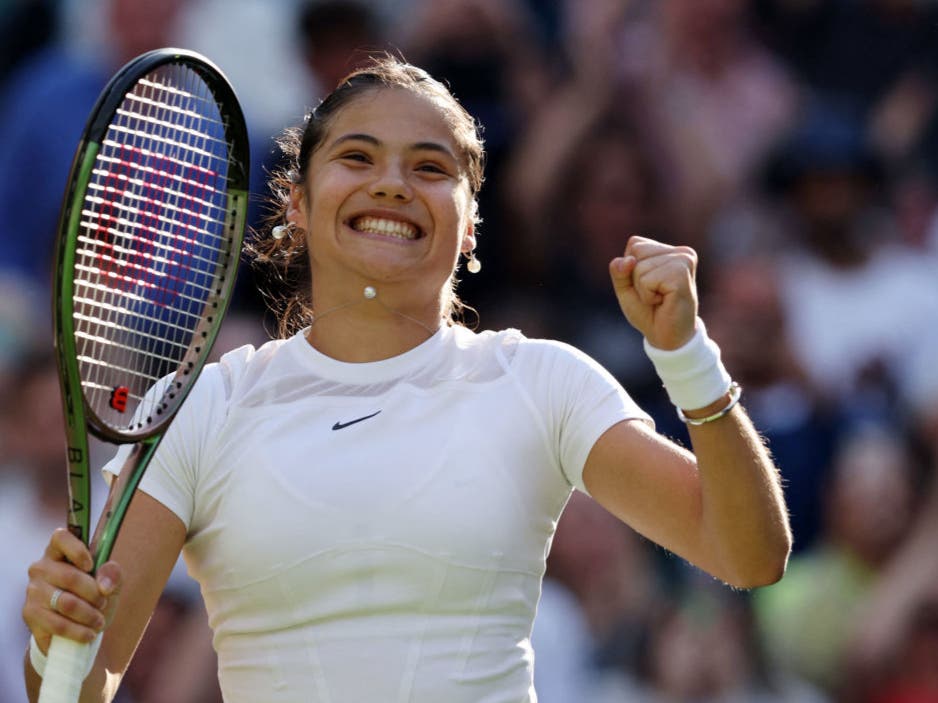 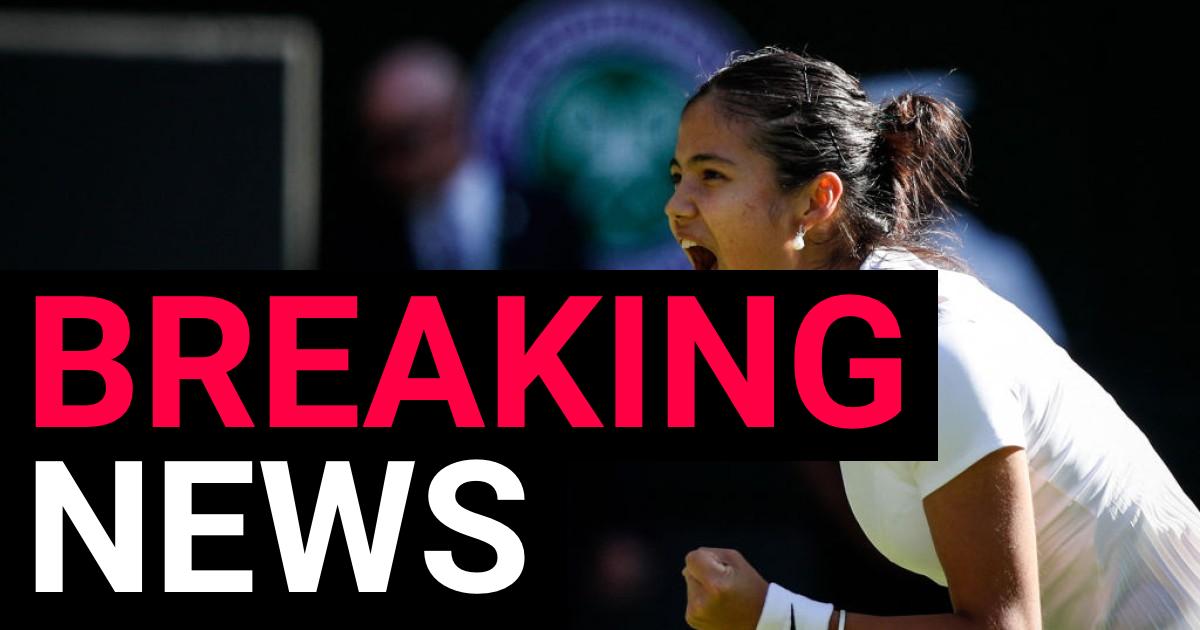 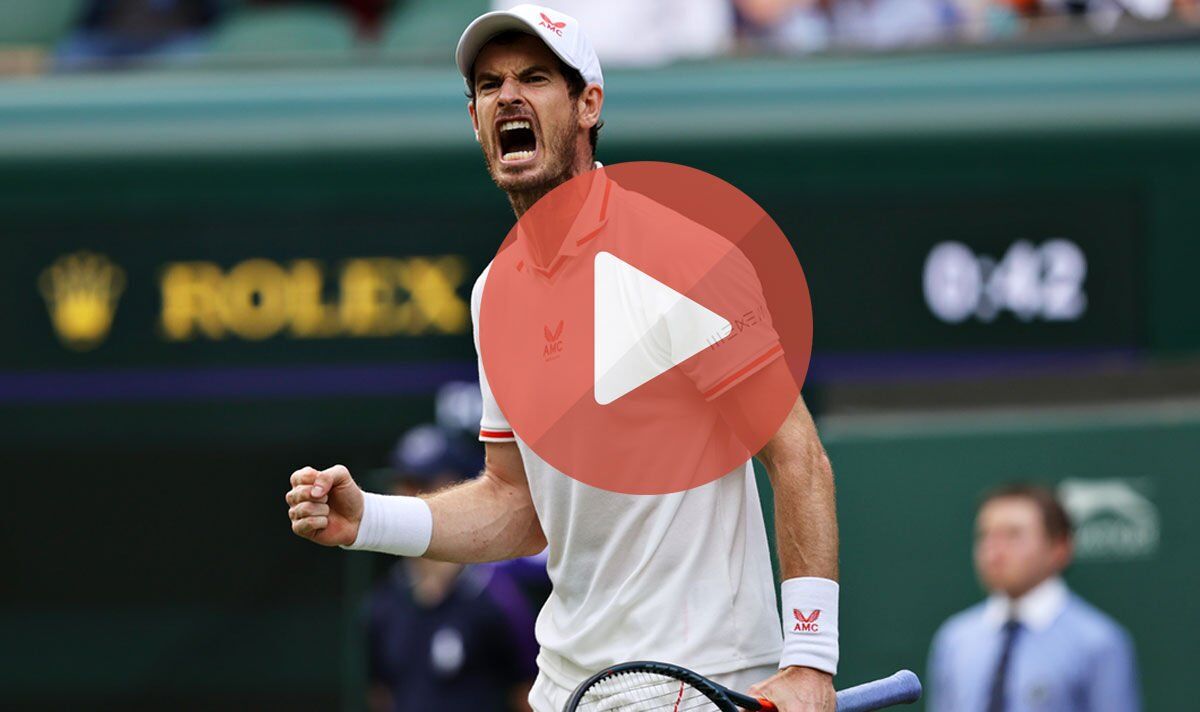