Gareth Anscombe is ready to shoulder the burden of the famous Welsh number 10 shirt and is excited to ‘rip into’ his favourite position against Scotland.

Saturday is only his third start at fly-half in his 19th cap, having been previously deployed as a full-back, and first at home in Cardiff.

And with Northampton’s Dan Biggar unavailable due to the match being played outside the international window and Rhys Patchell not yet recovered from concussion the 27-year-old wants to lay down a marker a year out from the World Cup. 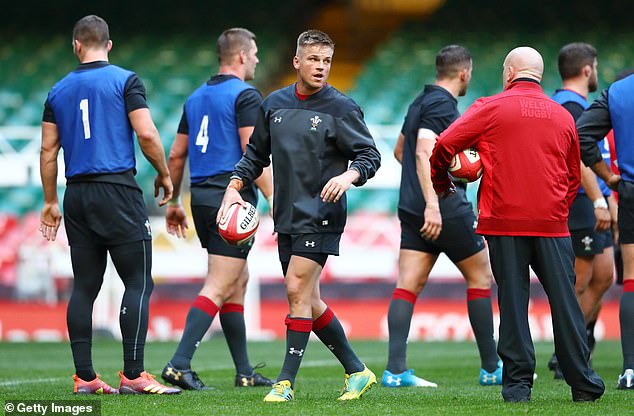 ‘It is a good opportunity and a chance to put a stake in the ground,’ said Anscombe.

‘Everyone is pretty excited and so am I. I’m just looking forward to ripping into it this weekend. Wales are pretty blessed with No 10s at the moment and there is a lot of competition for places. That’s good for the squad.

‘I get first dibs and I want to perform well and fight for the spot. I want to lead the side early and help us to play well. Wales have a pretty famous history in the fly half position. Your No 10s, point guards or quarter backs always seem to get a little bit of extra attention.

‘Sometimes you can win or lose games and rightly or wrongly No 10s can come in for a bit of criticism. And when things are going well you can often get more credit than you deserve. It is part of the position and most No 10s understand that.

‘I want to make sure I do the little things well and try not to over think or overplay my hand. It is my opportunity to be my own man this weekend.’ Anscombe played in the Cardiff Blues side that lost 29-12 to Glasgow Warriors in the Heineken Champions Cup a fortnight ago – where his opposite number on Saturday Adam Hastings won man-of-the-match. 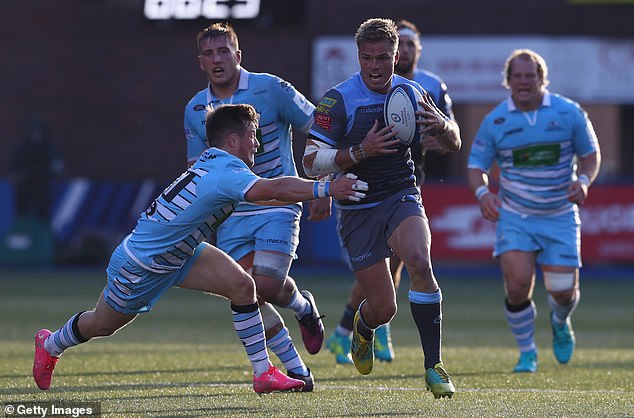 But Anscombe said that Test rugby will be an entirely different prospect for the 22-year-old.

‘He is an exciting young talent isn’t he?’ said Anscombe.

‘He played really well (against Cardiff) and has stepped up in the last few weeks for Glasgow. He is an exciting young prospect and he is dangerous on his feet. I guess we owe a couple of those guys something but it is a different jersey and a different challenge.

‘The game is going to be a bit more intense than that game I expect. It is going to be a challenge for all of us to try and put as much pressure as we can on Hastings – their 9 and 10 – and see if we can respond to that.’ But Scotland skipper Stuart McInally says Hastings does not need protecting.

‘He can look after himself, as he’s an excellent player,’ said the hooker, who is looking for added inspiration from Doddie Weir.

The teams are playing for a cup with his name on, and earlier this week both unions eventually decided to donate a six-figure sum to the legendary former lock’s charity. And the man himself – who has been stricken by motor neurone disease – was present at the Scots’ captain’s run on Friday, giving them an added boost. 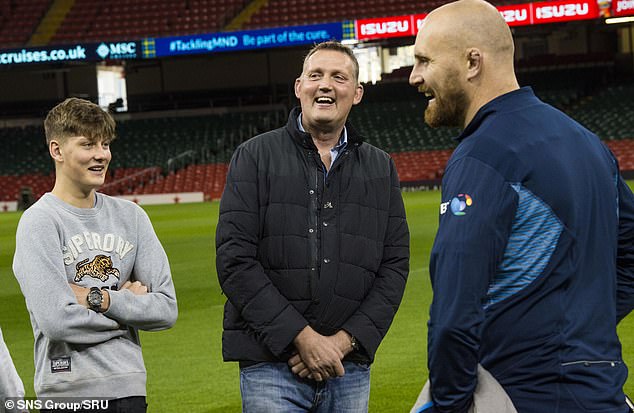 ‘It would be massive to lift the trophy for him – when you have something else to play for it makes it even more special.’ For Wales two converted-Kiwis will line up alongside each other for just the second time in red on Saturday, Anscombe and Hadleigh Parkes.

Anscombe has a Welsh mother but grew up in New Zealand, and Parkes qualified on residency last December – they played in the provincial same side four years ago.

And the pair will support each other not just in the midfield, but during the anthem.

‘We are both now wearing the famous red jersey, one that we are really proud to wear,’ said Anscombe.

We will be lining up next to each other at the anthem and will make sure we are belting that out.

‘He’s a good team man and he has been outstanding since he has been in Wales. He’s very consistent.

‘I am looking forward to teaming up with him again and it will make it a little bit easier to adjust to the pressures of Test rugby. It will be nice to run out together again.’