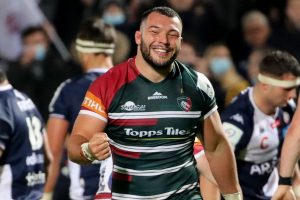 European rugby 's elite tournaments should be able to proceed without interruption this month after France's government approved exemptions for sports teams visiting the country.

The future of the Champions Cup and second-tier Challenge Cup were thrown into doubt after a string of December fixtures involving Top 14 teams—in France, England and Wales—were postponed or cancelled altogether.

That was after France all but put a stop to travel from the United Kingdom, leading to fears that a backlog of fixtures could prevent the elite competitions from reaching a natural conclusion.

France President Emmanuel Macron has taken a tough approach to the Covid-19 pandemic and recently told Le Parisien newspaper he wanted to 'piss off' those in the nation who are yet to be vaccinated.

Current rules require those travelling to France from the United Kingdom to self-isolate for 48 hours upon arrival, which would have likely prevented a raft of January's European fixtures from going ahead.

But Roxana Maracineanu, France's sports minister, delivered the news that Covid-19 travel exemptions would apply to all players, coaching staff and officials.

"Following dialogue with the leagues and unions, EPCR has been informed that exemptions for what is termed the “pursuit of an economic activity” which have been put in place by the French government will apply to clubs and match officials who are travelling between France and the UK," read a statement from European Professional Club Rugby, the body responsible for organising the Champions Cup and Challenge Cup.

"Further information will also be sought from the French authorities regarding possible new conditions which may be applicable to travel between France and the UK.

"While recognising that these are particularly challenging times for all its stakeholders, EPCR will continue to work with the leagues and unions so that this month’s matches can be played safely."

EPCR concluded by saying it was confident both tournaments "will be played to a successful conclusion," though the ongoing spread of the Omicron variant could throw up further obstacles.

The pool stage of the Champions Cup is poised to conclude later this month, with Round 3 fixtures taking place across January 14-16 before a final set of matches the following weekend (Jan. 21-23).

The Challenge Cup will play out its own third and fourth-round fixtures in sync with its first-tier counterpart, though it's also set to host a batch of fifth-round games between April 8-10.

Strict crowd measures remain in place in Wales, meanwhile, as Cardiff confirmed their January 14 encounter with Quins will take place behind closed doors at the Arms Park.

Despite pressure to ease the no-fans policy, First Minister Mark Drakeford confirmed on Friday plans to keep the current stadium bans, with almost 1,000 people currently in Welsh hospitals due to Covid-19.

France's new sports exemptions could also be extended to protect those teams set to visit during the 2022 Six Nations, which is scheduled to get underway on February 5.

Les Bleus are due to host Italy (Feb. 6), Ireland (Feb. 12) and England (March 19) as they look to go one better than last year's runner-up finish by winning their first Six Nations crown since 2010.