Eddie Jones was the world’s No 1 sledger

Eddie Jones was the world’s No 1 sledger: The day England’s coach gave the All Blacks a run for their money

Do not be surprised when Eddie Jones sledges the All Blacks this week – he has been refining the art for 30 years.

The England head coach has had 14 cracks at New Zealand and won five times, but perhaps the most formative of the lot came when he played for his Sydney club side Randwick District RFC against the world champions in 1988.

It was telling after the victory over South Africa Jones’ thoughts immediately turned to the first time he poked the All Black bear. 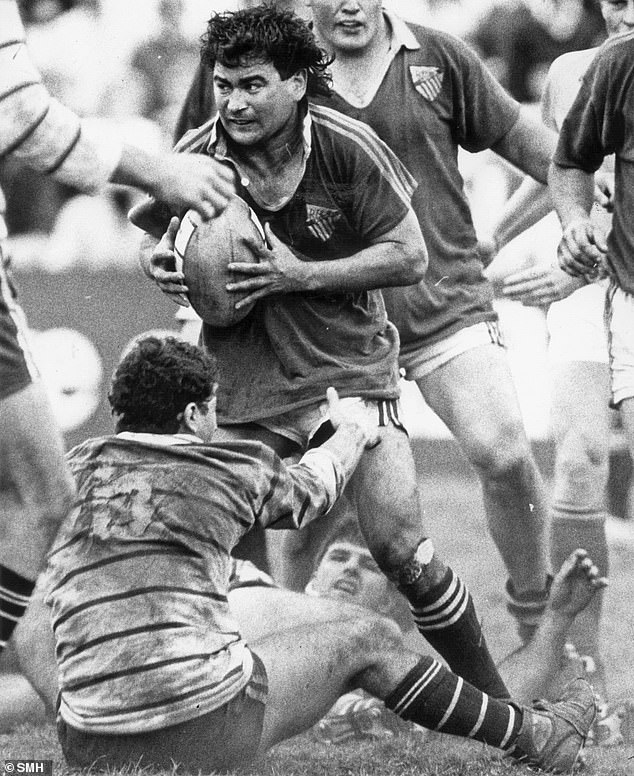 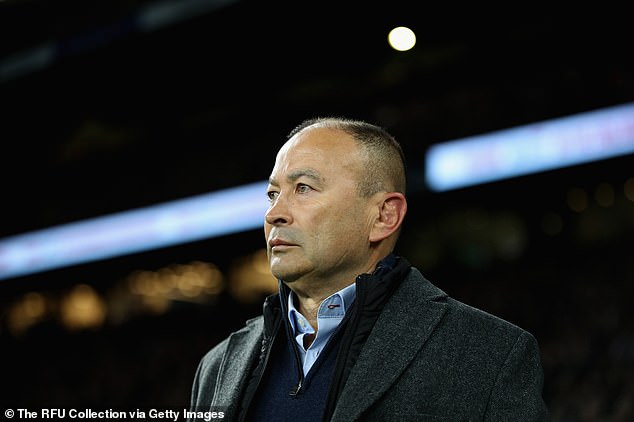 Then Jones was a shaggy-haired 28-year-old, 5ft 6in, 11st hooker who threw the ball in one handed – but that is all that has changed.

There he was at Coogee Oval, as he will be at Twickenham on Saturday, ready to battle the best, armed with ‘rat-cunning’, no little skill and an acid tongue.

‘Eddie was the No 1 sledger in the world,’ Simon Poidevin, the former Wallabies skipper, 1991 World Cup winner and Randwick blindside flanker in 1988 told Sportsmail.

‘No one came near him. Although Michael Cheika wasn’t too far behind! Not only did we have world class players, but world class sledgers.

‘Needless to say there was a fairly strong verbal barrage between us and various All Blacks!

‘There was a respect for them, but no fear.’ 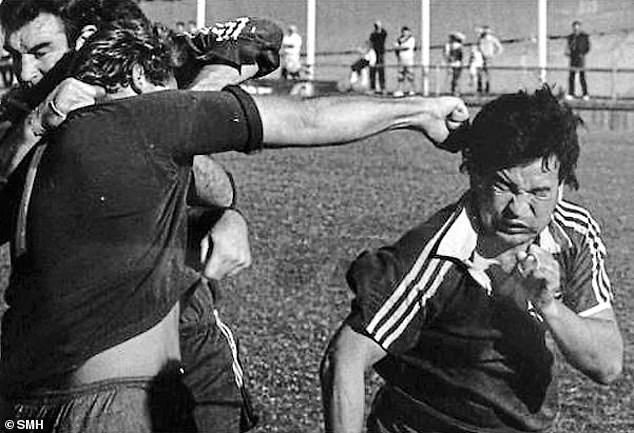 Jones was a shaggy-haired, 28-year-old, 5ft 6in, 11st hooker who threw the ball in one-handed

‘He was bloody nuggety and didn’t mind having a bit of a yarn,’ remembered Sir John Kirwan, one of many World Cup winners on the visiting side.

‘He hoed into it. Throw Fitzy into the mix and you have some pretty good banter going on!’ Jones’s opposite number Sean Fitzpatrick – who had lifted the inaugural World Cup the year before – remembers it slightly differently.

‘He had plenty of work to do, so didn’t have much time for sledging!’ laughed the former hooker.

‘He was a huge competitor. Eddie is three years older than me so was teaching me a few tricks.’

It was the first and last time the Kiwis would take on an Australian club side.

Packed full of home-grown Wallabies like David Campese, Gary Ella and Poidevin, and future Test coaches Ewen McKenzie, a 21-year-old Cheika and Jones the ‘Galloping Greens’ flew into the All Blacks, who picked 13 of their Test stars.

They lost 25-9 – scoring once through Lloyd Walker – but it was quite the scrap.

‘It wasn’t easy I can assure you,’ recalled Fitzpatrick.

Kirwan echoes that: ‘They were bloody tough,’ he said. ‘It felt like a Test match.’ Poidevin was just worried about letting his beloved club down. ‘Everyone thought it was going to be a cricket score,’ he said. 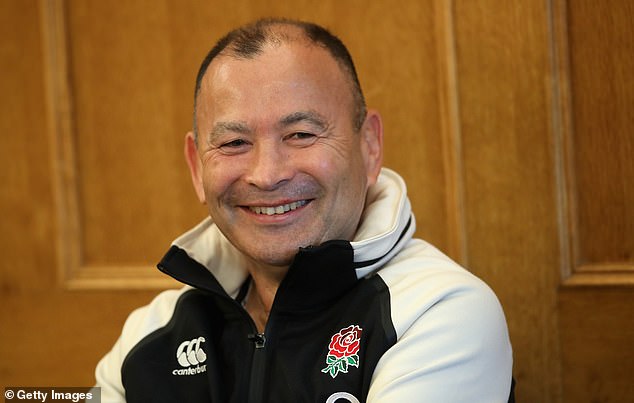 ‘Eddie was the No 1 sledger in the world,’ Simon Poidevin, the former Wallabies skipper, said

‘It was hammer and tongs. Mate, the bodies put on the line… there was such an intensity across the whole field. A magic day.’

Even in those ‘old-school’ days, Jones was small. Ultimately it meant, unlike 103 others from Australia’s most prolific club at producing Test players, he never became a Wallaby.

But, of course, he was at the heart of the fight.

‘The incredible thing about Eddie was his size,’ continued Poidevin. 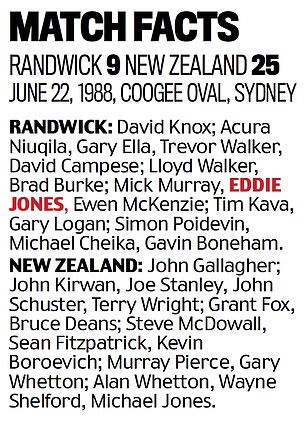 ‘Fitzpatrick was a big physical hooker, Eddie Jones was a jockey. No one that small plays now. Brian Moore was the closest internationally, but Eddie was even smaller.

‘He probably wasn’t going to get to the next level because of his size. But for skill, tenacity and rat-cunning he was up there.

‘Grant Fox kept the scoreboard ticking with the penalties which came from the pressure they were applying from the set-piece, but it really was a lot closer than the final scoreline.

‘There were no fisticuffs – although at one point Buck Shelford tried to rip my head off, and was given the green light by the referee – but from the opening whistle we climbed into them. From that moment they knew there was a game on.

‘The scrum went back a bit but we didn’t get totally destroyed. We always knew we’d not be able to take on the New Zealand forward pack with the guys we had, but hung in there. 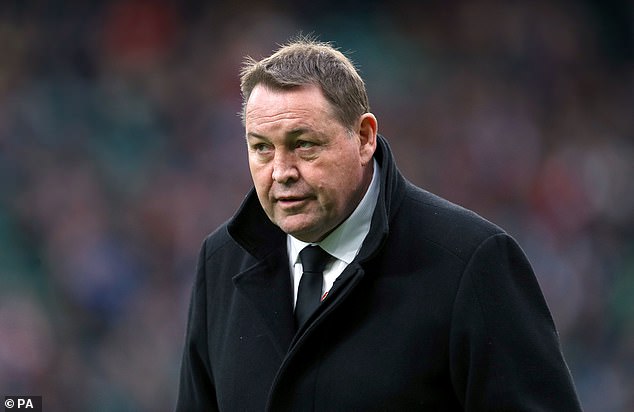 ‘You look back and think “gee-whizz Eddie, how did you do it mate?”‘ The Oval was heaving. The Sydney Morning Herald reported a crowd of 9,246 in a ground that only held 7,500 – Poidevin reckons at least 5,000 more packed the surrounding streets, craning for a view of the New Zealanders.

‘There wasn’t a vantage point that wasn’t jammed with harrackers,’ the paper wrote.

‘Fans climbed trees, balanced on walls and fences. Two men squatted on the roof of their removal truck to watch the game.’ One bloke had 80 mates on his roof for a barbecue – the air ‘alive with the smell of sausages…and insults flowing freely.’ ‘It was like playing at the beach,’ said Kirwan.

‘That was probably why we didn’t perform as we should have as it was absolutely crazy.’ For Fitzpatrick it was one of his great afternoons as an All Black.

‘It was like going to Neath in 1989 – people were hanging out of windows and all the high-rise apartments around it,’ he regaled.

‘They had a little-old changing room and we literally just walked out via these concrete steps onto the field. They had to keep people behind the ropes.’

Just like then, this week the ‘house full’ signs went up long before kick-off at Twickenham, and thirty years on Jones may not have chucked his grenades yet but his relish to fire into the All Blacks remains.

For the Kiwis, the feeling is mutual. 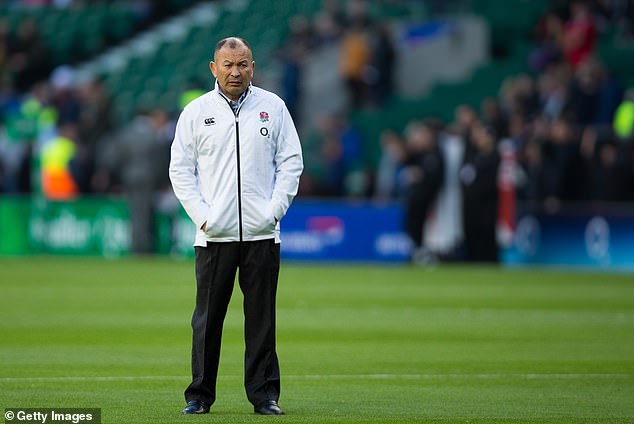 ‘We have been waiting four years for this baby!’ said Kirwan.

‘I saw Steve Hansen and him have a bromance going on – a bit disappointing really, I was looking forward to the fireworks! What’s going on mate?!

‘It’s all fun. I love all that banter as long as it doesn’t get personal.’ Poidevin says sparks will fly, though.

‘Some coaches are scared of being incendiary against the All Blacks but he does not fear that – he sees it as a weapon to motivate his side.

‘Some people say “don’t poke the bear” but why not?

‘In 1988 it was a pretty strong bear he was poking! He went the 80 minutes, went hard and wasn’t intimidated. This is the match that Eddie has been waiting for – so, game on.’