Crisis comes early for Waratahs after Penney handed a broken side

Crisis has come early for the Waratahs this year. Mid-February must be a record, even for a side that, in recent years, has been a leader in innovation in terms of torturing its supporter base.

With a third loss already in the can, a bye week coming up and then a home game against the Lions at Bankwest Stadium in round five, there is the real possibility that Rugby Australia might have to stuff the stands with cardboard cut-out fans to improve the "optics" for potential broadcast bidders (TV people hate those empty seats).

Where did it all go wrong on Friday against the Rebels, a loss so predictable that even five out of six Sydney Morning Herald tipsters called it correctly? 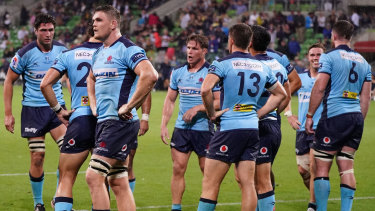 The Waratahs react to the final Rebels’ try on a night that confirmed the worst for long-suffering fans.Credit:AAP

It beggars belief that this was allowed to happen and the departures of chief executive Andrew Hore and then defence coach Steve Tandy (more on that later) after Penney's arrival added to the sense that all was far from well.

With that in mind, Penney would have been leaning heavily on his Wallabies players this year, but they were poor on Friday, particularly Kurtley Beale, who was caught out on occasion in defence and whose error rate was too high.

The influence of the back row, with two current Wallabies, was negligible and such is a drop-off in quality to the Waratahs' non-Wallabies that when the senior players fail to stand up the Waratahs look like a very vulnerable team.

The lack of in-game organisation was also evident in some of their defensive frailties, surely a product of Tandy's exit shortly before the season started.

After about 30 minutes, Rebels halfback Ryan Louwrens might as well have had a neon sign flashing above his head declaring, "I'm going to go down the blindside all night", but the Waratahs were still being hurt by the tactic well into the second half. 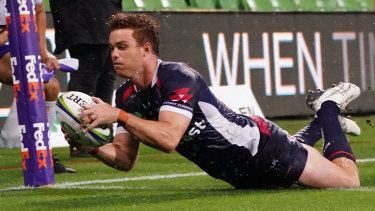 Andrew Kellaway crosses for the Rebels after a defensive passage that summed up the Tahs’ woes.Credit:AAP

The build-up to Andrew Kellaway's first try also highlighted the size of Penney's job. Although the Rebels were operating with relatively slow ball, they still managed to engineer an overlap with ease. Waratahs centre Lalakai Foketi (on for Karmichael Hunt) can be seen frantically waving for support two or three phases before Kellaway's try, but the Waratahs were slow to react.

Then Alex Newsome, who is an experienced midfielder, was sucked into no-man's land close to the ruck because he has lost faith in his inside men to do the job. Sensing that Newsome was out of the game, Beale then rushed out of the line on an all-or-nothing defensive play and the Rebels took advantage by going wide and putting Kellaway over in the corner.

There were lots of errors in that Waratahs defensive set but, as with the tight-head position, the Waratahs have failed to develop any midfield options who are capable of playing at the highest level.

They badly needed to do what the Blues or Stormers did: recruit from abroad. The Blues grabbed England centre Joe Marchant and the Stormers acquired Welsh veteran Jamie Roberts. However, with the Waratahs struggling for years, would their finances stretch that far? It's doubtful.

It's fortunate that Penney has been around the block. A less experienced coach would be in danger of being overwhelmed.

But even Penney must be looking at this weedy Waratahs garden and wondering, "Just where do I start?"