Home » Rugby Union » Bledisloe window is open for Wallabies, but it may not stay that way 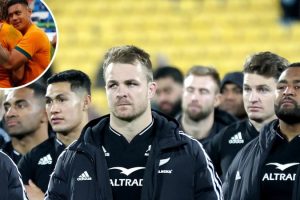 The scheduling of this year’s Rugby Championship is full of irony.

For years it has been argued that playing the All Blacks at the start of the tournament was a disadvantage for Australian rugby, so shifting the two Tests to the back end of the competition was largely seen as beneficial.

Not this year. If the ‘normal’ schedule had been in place this year, the Wallabies would currently be 1-0 up and a very good chance of claiming the Bledisloe Cup with a 2-0 series win.

There’s no doubt about that in my mind, largely because Dave Rennie has embraced a style – perhaps somewhat against his instincts – that works in the collision-heavy, set-piece dominant smashfest that is Test rugby at present.

Here’s the truth about last week’s win against Los Pumas. Quade Cooper played well, but the Wallabies scored 31 of their 41 points after he left injured, with three tries coming from the Brumbies’ maul.

The All Blacks, meanwhile, are still playing Test rugby in the way they think it should be played, and they aren’t even doing that particularly well. 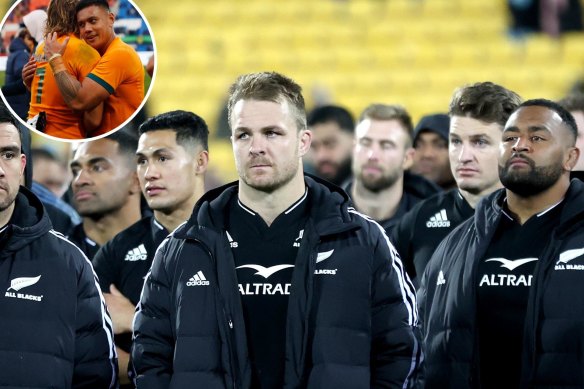 Under a normal Rugby Championship schedule, the Wallabies would have faced an under-siege All Blacks side this week.Credit:Getty

So, the Bledisloe Cup window is currently open for the Wallabies. But, whether it remains so depends on a combination of three factors.

First, that Rennie doesn’t break the squad with his notoriously tough training methods.

Second, the All Blacks’ next move on their coaching setup – whether they keep Ian Foster or find a replacement for a job that has a hint of ‘poisoned chalice’ at this stage of the World Cup cycle.

It’s been hard to ignore the Wallabies’ injury woes this year, and it is certainly felt in New Zealand that the Chiefs under Rennie were frequently pushed to breaking point and beyond.

The Wallabies are obviously trying to find the sweet spot: being able to play a highly abrasive style of rugby while keeping their players on the field. It’s certainly extremely challenging to play against when the Wallabies get it right. They have some enormous athletes in Taniela Tupou, Rob Leota and Rob Valetini, who can subject opponents to 80 minutes of relentless ball-carrying.

At the moment, even their wings and centres have the same mentality: run hard and run often. Perhaps they lacked a bit of nuance in that last 15 minutes against England, but they went pretty close to winning that series by virtue of their out-and-out physicality alone.

If you attach Dan McKellar’s technical excellence to that hard-edged running, it creates a package that may not win any prizes aesthetically, but very much captures the zeitgeist for Test rugby in 2022.

The Wallabies, in fact, are probably close to assembling their own Bomb Squad to match the Springboks’ 6-2 split: Rennie could comfortably pick a second tight five on the bench and have Reece Hodge and Tate McDermott/Jake Gordon as his only backline reserves. 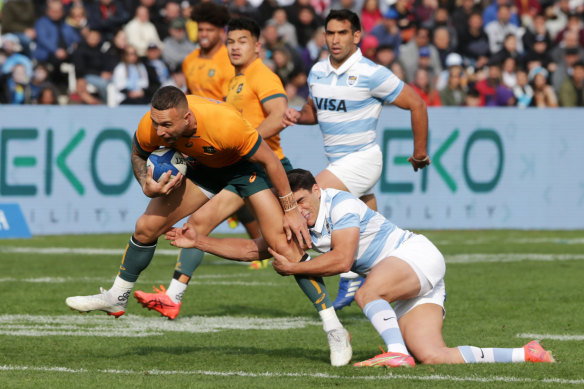 Quade Cooper dominates the headlines for Australia, but the Wallabies scored 31 of their 41 points last week after he was injured.Credit:Getty

At present, the Wallabies players seem to be largely at peace with this relentless style. It has unquestionably brought out the best in Folau Fainga’a, while Tupou looks a full 10-15 kilograms lighter than he was in Super Rugby. The question is: how long can they keep playing this way?

The All Blacks, by contrast, have not been playing with a clearly defined identity for a while. Their lapsed catch-pass skills mean they can’t play a fast-fast style, their pack does not generate enough turnover ball to create unstructured play, and the use of tactical substitutions and constant stoppages in Test rugby have removed fatigue as a factor.

They are, in fact, somewhat lost and that is why the Wallabies probably wish they were heading to New Zealand this week to secure the Bledisloe Cup. That window is open.

A warning, though: it may not stay open. The work of new forwards coach Jason Ryan was evident in the All Blacks’ loss to the Springboks last weekend, and they suddenly looked more organised. Even if Foster keeps his job, Ryan’s positive influence is likely to grow.

If Foster loses his job, more changes will come. Scott Robertson – if he can be persuaded, and that’s a big if – Joe Schmidt and Warren Gatland are all in the background, and all three have enjoyed a level of success that has eluded Foster.

The Bledisloe window could therefore be shut firmly on the Wallabies’ fingers, leaving them to lament the change in Rugby Championship scheduling that has worked against them.

Watch every match of The Rugby Championship on the Home of Rugby. Continues this weekend with South Africa v All Blacks (Sunday 12.30am AEST) and Argentina v Wallabies (Sunday 4.45am AEST). All matches streaming ad-free, live and on demand on Stan Sport.