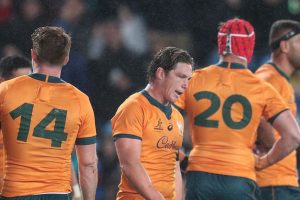 A bad week for Australian rugby continues to worsen after the Wallabies discovered they’ve fallen to a joint-record low of seventh in the latest World Rugby rankings.

Dave Rennie’s men were devastated 57-22 by New Zealand on Saturday to miss out on the Bledisloe Cup for a 19th year in succession.

Their second Eden Park defeat in seven days also saw them open the 2021 Rugby Championship in nightmarish fashion, with the All Blacks set to visit Optus Stadium in Perth on August 28.

The latest shift in the rankings means Argentina swap places with their tournament rivals and climb to sixth, while Australia drop back to their all-time lowest position in seventh.

The Pumas lost their Rugby Championship opener 32-12 to world champions South Africa on Saturday, though that result was less surprising than the one witnessed in Auckland.

The sole positive for Rennie and his stars is that with only one-hundredth of a point separating the pair, they may have a chance to move back up should they beat the All Blacks in Perth.

Australia defeated New Zealand 24-22 the last time they hosted their bitter foes in Brisbane last November, though the latest performance won’t inspire confidence they can replicate that result.

Scrum-half Tate McDermott’s score on the stroke of half-time saw the Wallabies go in only six points down, but they failed to prevent a second-half surge from their Eden Park hosts.

Andrew Kellaway’s brace of tries was one of the few positives for the guests, with the Melbourne Rebels winger bringing his record up to three tries in only two Test starts.

World Rugby determines its rankings based on a ‘points exchange’ system, meaning opponents take ranking scores off one another depending on the result.

Hosting teams are ‘handicapped’ due to home advantage, but factors that determine a ranking points swing include the match result, margin of victory and the ‘relative strength of each team’.

Australia's most recent defeat to the All Blacks has sparked fresh speculation that the country could scrap the 'Giteau Law', relating to the eligibility of overseas players.

The Wallabies have the extra advantage of hosting each of their five remaining Rugby Championship games as a result of quarantine restrictions due to the Covid-19 pandemic.

They’ll face New Zealand once more before taking on No. 1-ranked South Africa in back-to-back fixtures, ending their competition with consecutive outings against Argentina.