All Blacks team up with Harlequins at Twickenham Stoop

All Blacks team up with Harlequins as Joe Moody, Codie Taylor and Nepo Laulala coach school kids and train at Twickenham Stoop

The All Blacks may be playing against Japan on Saturday – but some of their stars are already training in London.

The vast majority of the top New Zealand players will not feature in the Yokohama match, but are in England preparing to take on Eddie Jones’ men Twickenham next weekend.

And this Friday a few trained at the Twickenham Stoop with Harlequins players and school kids. 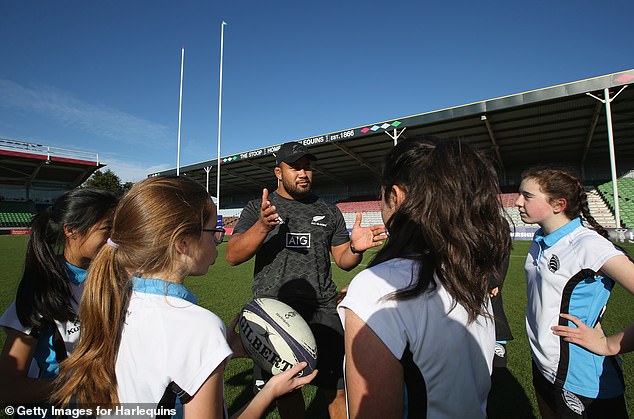 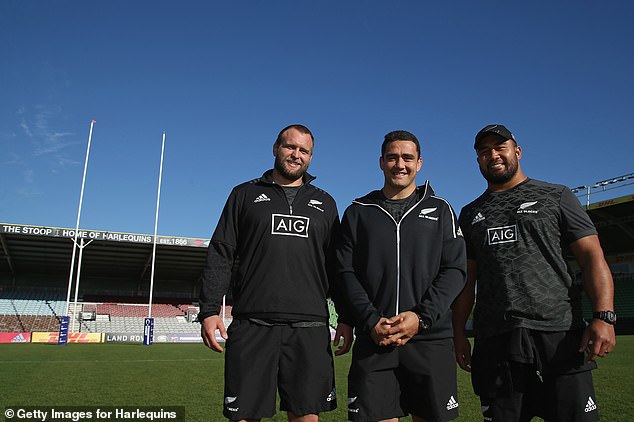 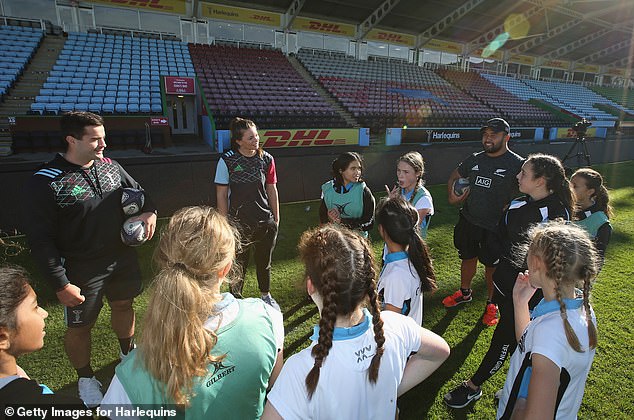 Hooker Codie Taylor and props Joe Moody and Nepo Laulala chucked balls around a drop-kick from England’s home ground, with James Horwill and Gabriel Ibitoye over the road from rugby HQ.

Their appearance at the Stoop is all part of an ongoing partnership – on and off the field – between Harlequins and the All Blacks.

And legendary Kiwi Sean Fitzpatrick, who won 92 caps for the All Blacks, the World Cup in 1987 and is now an ambassador for the Gallagher Premiership club, said while the arrangement would not see a sudden influx of world champions in TW1, there may be a chance for Quins to sign some New Zealanders after the World Cup. 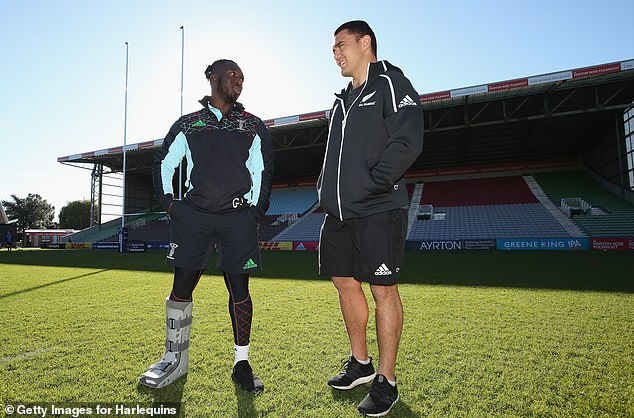 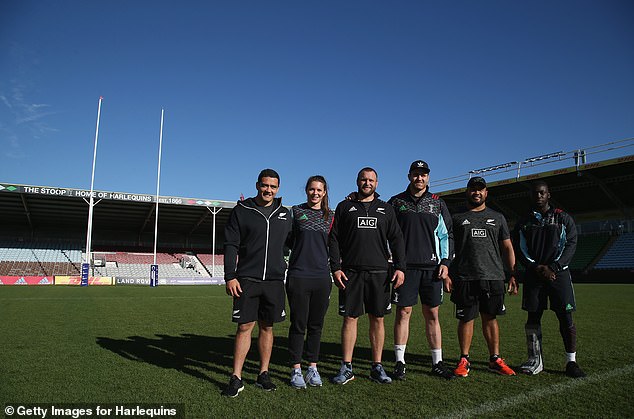 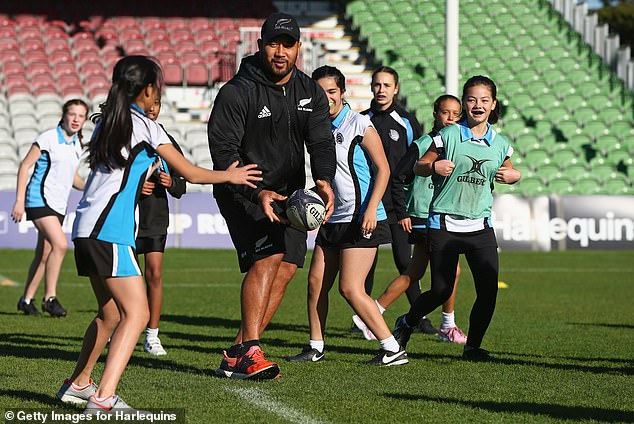 ‘Yeah potentially,’ said the 55-year-old. ‘There will be a number of players who will be looking for opportunities after the World Cup for sure – that is head of rugby Paul Gustard and the recruitment boys who’ll look at that.

‘We understand the commercial reality of what players are worth and there was never a thought of ours that we would suddenly get all these All Blacks, but it does open the option of bringing players into our environment from the All Blacks.

‘They know they will be looked after in terms of their well-being, the way we train, but it is a commercial arrangement.

‘If it works it is a benefit to New Zealand Rugby because the players will be looked after. Ultimately the players want to play in World Cups.

‘In the cycle, if two of those years could be played somewhere else, physically and mentally it can only be good for New Zealand Rugby, and vice-versa.

‘I don’t think they’ll come up here just to be looked after – if they were to do that they might as well do that in New Zealand.’ 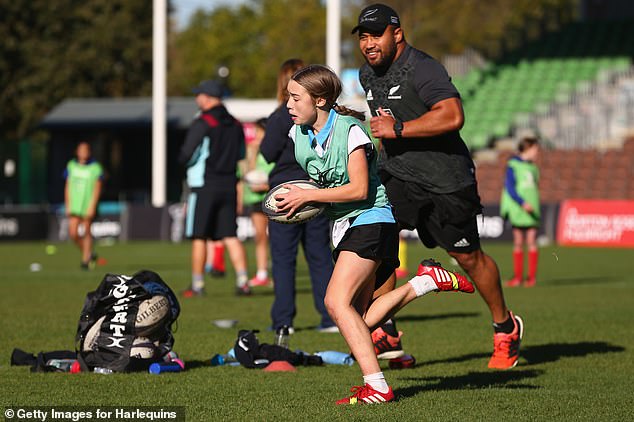 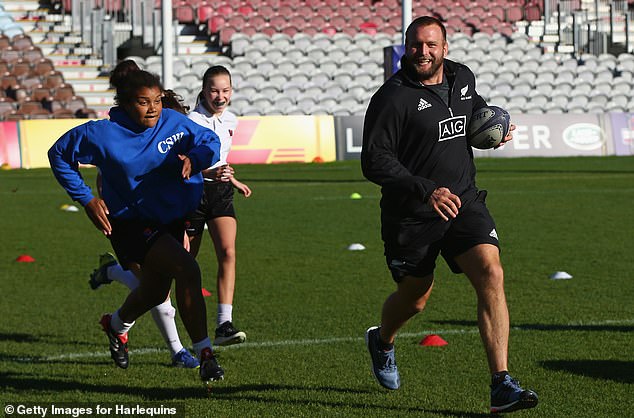 Prop Moody runs away from the school children, who attempt to tackle him 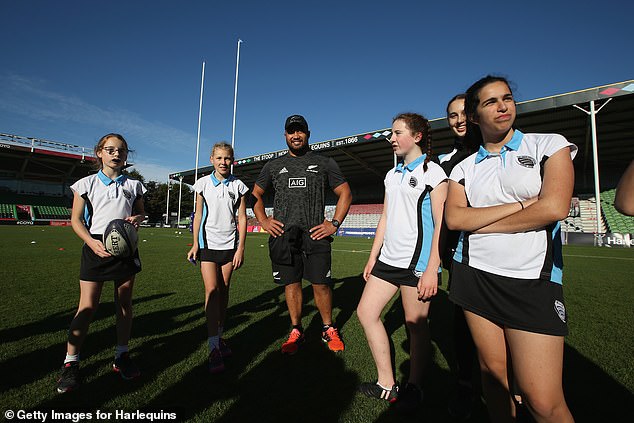 And he wants young Quins to go to New Zealand to further their rugby education too – something he wished he had the chance to do himself.

‘We are trying to build the relationship between the girls and the academy in terms of sharing best practice and potentially some of our academy players going to New Zealand and vice versa,’ Fitzpatrick added.

‘(Skills coach and former All Black) Nick Evans has been to New Zealand a couple of times working with NZR which is good.

‘I see it as a huge positive for Harlequins and hopefully New Zealand.

‘I would definitely like to work on our academy boys getting more experience of New Zealand culture, which I think is a real positive. It is one of the big differences, the way we are brought up in New Zealand – that work ethic. 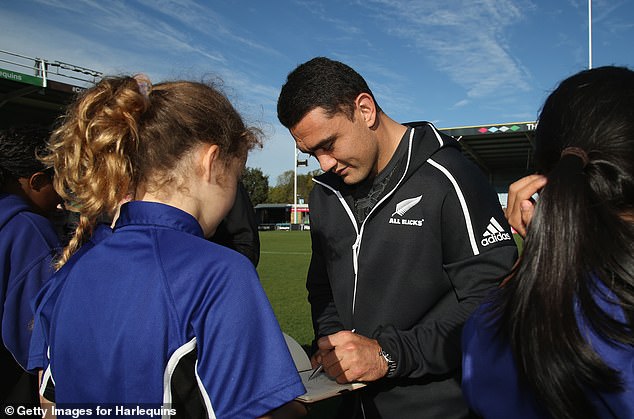 ‘I am not saying it is not up to standard here but it is a different kind of attitude that I see more and more living up here, then seeing the New Zealand environment.

‘I would have loved to have experienced more European rugby at a young age. Even as All Blacks, when I came up in 1991 it was the first time I had ever played against England, and it was just a totally different style of rugby – especially as a forward.

‘When you had the Jason Leonard and Brian Moore they taught you the dark arts of scrummaging!

‘We were very French orientated – the English were a bit more wily. Craig Dowd, the ex-All Black, played for many years up here for Wasps and wished he had come at the start of his career rather than the end.

‘The long term vision is that we at Harlequins need to not accept coming second, that we can be better, so the association with New Zealand Rugby is definitely a real positive for the future of Harlequins.’