Ireland head coach Andy Farrell believes the Rugby Football Union’s decision to lower the tackle height across the amateur game will leave players “even more vulnerable”, describing it as an “accident waiting to happen”.

The former England international believes grassroots players will be “sitting ducks” without the correct coaching after the RFU last week announced that it plans to lower the legal tackle height to the waist.

The new rule, which will change all levels of rugby from the English third tier to the bottom of the amateur game, has been met with uproar, with England internationals including Joe Marler and Lewis Ludlow joining amateur players and coaches in expressing their concern.

“I think it’s super important that what has to come with [the new laws] is the correct coaching, the correct technique,” Farrell said.

“If you are ever just saying to a kid that ‘you need to tackle lower’, then you become even more vulnerable. If you’re just sitting there with your arms in front, trying to wrap, with your head down etc you’re a sitting duck. [It’s an accident] waiting to happen.

“The coaching and technique of how it’s applied to tackling below the waist is crucial, otherwise we’re going to have a serious problem.” 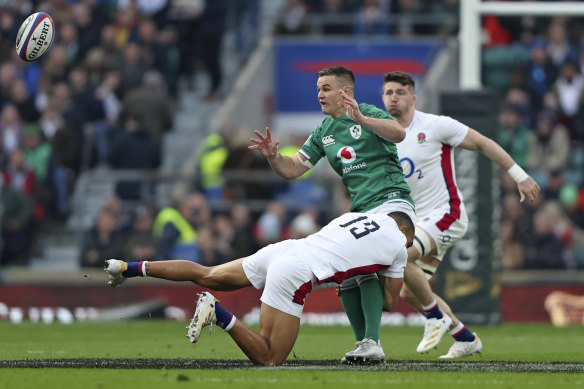 Ireland playmaker Johnny Sexton is wrapped up around the waist during last year’s Six Nations.Credit:AP

Farrell’s captain, Johnny Sexton, speaking at the Six Nations launch in London on Monday, said he understood amateur players’ frustrations, adding he would not want to see the same law introduced in Ireland.

“Look, I don’t agree with it,” said the five-eighth, who has had numerous concussions. “There’s no point sitting on the fence really, is there? I just think you have tall people who play the game. It should be their decision to how they tackle.

“Of course we need to get the head shots out of the game, but the tackles we really need to take out are the reckless, out of control, sprinting out of the line, tucking arms, all of those types of ones.

“Hitting someone [at chest level] should be an option. It’s not like you can’t get concussed by chopping someone’s knees. I’ve seen a hell of a lot of concussions from people getting their head on the wrong side, a knee to the temple or a hip even to the side of the head. So, I strongly disagree.” 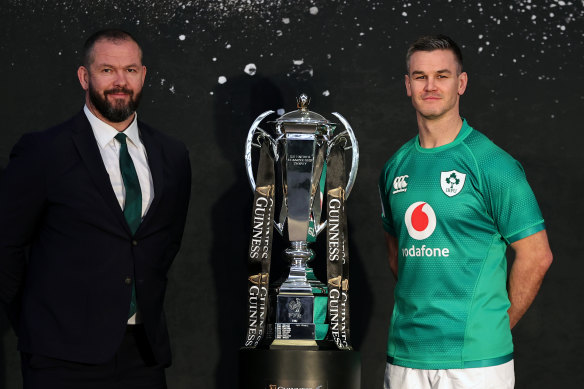 However, Owen Farrell, the England captain and son of the Ireland head coach, backed the RFU’s move, claiming that the national side “want to be at the forefront” of making the game safer.

“In terms of where the game’s going and trying to make it safer, the RFU are trying to make sure it’s going in the right direction and we want to be at the forefront of that,” Farrell said. “We want to play as hard and safe as we possibly can and I want to be part of that.”

Farrell is currently serving a suspension for a dangerous tackle against Gloucester, and will return in time to face Scotland at Twickenham next week after undergoing World Rugby’s Coaching Intervention Programme [CIP], known as ‘tackle school’, to reduce his ban by one week.

“I’ve been on [the course]. What it does do, you look at what you can do better from the situations that put you in it in the first place,” Farrell said. “I’ve had time to step back and learn from that.”

Ben Morel, the chief executive of the Six Nations, has categorically ruled out any prospect of the Springboks joining the championship despite interest from the South African Rugby Union.

With their club franchises now playing in Europe, speculation has persisted that the South Africa national side are keen to join the Six Nations to bolster broadcasting revenue and amid concerns about Italy’s competitiveness.

However, Morel insisted there had been no discussions about any changes to the format of the championship, also ruling out any moves to consider the introduction of promotion and relegation. “There is no conversation about expanding the Six Nations right now, the entire focus is on finding the right solution and improvements to the July and November windows and finding a more competitive narrative for those fixtures,” Morel said. 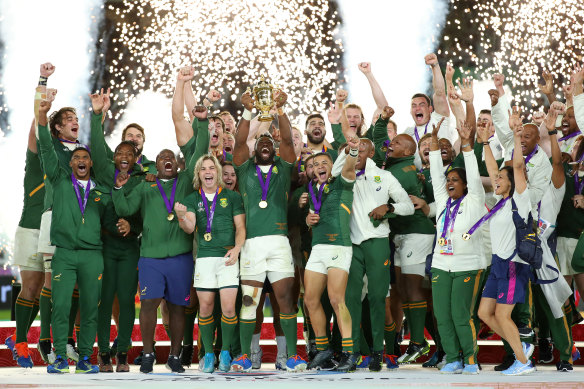 “Our whole energy of the Six Nations is focused on that. So there’s no conversation regarding anything else.

“There never has been. There has obviously been some interest, but we are not engaging in any of those conversations. We are focused on what we think is the right balance for the game, and that is finding competitive fixtures that will bring some pathway to the developing nations as well.

“We are having really productive calls and exchanges with the southern hemisphere on that and hopefully we can come to some agreement in the relatively short term and we believe that is in the interest of the game.”

Morel said he could understand why supporters would link the introduction of South African franchises into the United Rugby Championship and now the Champions Cup to links with the Six Nations for the Springboks.

“I can understand that dynamic, but the players in the club game in South Africa needed a competition to play in, which has been an issue on their side,” he added.

“But in terms of the overall equilibrium of the game, we are focusing on the July and November windows and that is the right thing to do.”

Morel also welcomed the decision by Netflix to make a behind-the-scenes documentary about this season’s championship, even though it will not be broadcast until next year because of concerns within the teams that secrets could be shared ahead of the World Cup in France in September.

Watch all the action from the Six Nations with every match streaming ad-free, live and exclusive on Stan Sport from February 5.