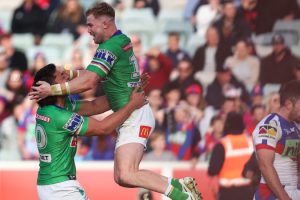 A moment of Hudson Young brilliance has helped the Canberra Raiders pull off the great escape in the 79th minute of their clash with the Newcastle Knights.

The Raiders looked as though they would squander a 14-point lead when they fell four points behind before Young collected his own grubber to score in the dying moments of a 20-18 win at GIO Stadium on Sunday.

The Raiders are just one win outside the top eight while the Knights are now six points off the pace and quickly losing touch with the finals contenders.

Newcastle were left gutted at the final whistle. Captain Kalyn Ponga was routinely down on his haunches and in constant need of treatment for an upset stomach.

It was reminiscent of the day the Knights star shrugged off illness to score a double and set up two tries in a match-winning performance over Cronulla last year. But this time there would be no such heroics.

Newcastle needed their most potent weapon to inspire the competition’s weakest attack after the Raiders shot out to a 14-0 lead on the back of their youth brigade. 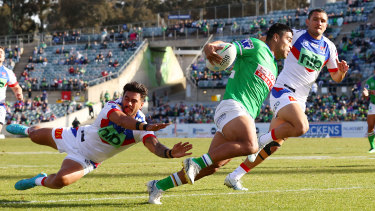 Xavier Savage played a starring role at fullback for Canberra, and he fittingly had their third when he leapt over the Newcastle defence to score off a kick. His will to win the ball was emblematic of the contest to that point. The Raiders were fighting to win every moment while the Knights looked toothless.

But Adam O’Brien’s side found a glimmer of hope when Ponga put Kurt Mann over to slash the margin to eight against a side somewhat accustomed to a second half fadeout. 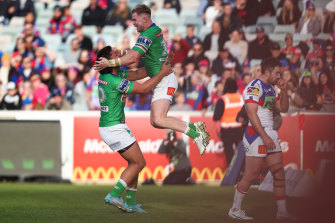 Newcastle repelled waves of back-to-back sets before launching a raid of their own, which saw the Raiders reduced to 12 men when captain Elliott Whitehead was sin-binned for a late shot on opposing captain Ponga.

Within moments the mercurial Knights fullback made Canberra pay, putting a grubber through for Mat Croker to score his first NRL try.

Whitehead soon returned to the fray but the Knights responded to that challenge again. This time it was Edrick Lee capping off some impressive play from Mitch Barnett and Adam Clune to give the visitors the lead.

A Tuala knock on saw Lee denied a second which would have put the result to bed, and then Young rose to the occasion with the game hanging in the balance.