It was the performance which Adam Reynolds says proves South Sydney have more strings to their bow than in 2018, and poised to go one better this NRL season.

Wayne Bennett's Rabbitohs turned the title race on its head with a final-round 16-10 defeat of the Sydney Roosters, but face a return clash against their old foe this Friday in week one of the finals series. 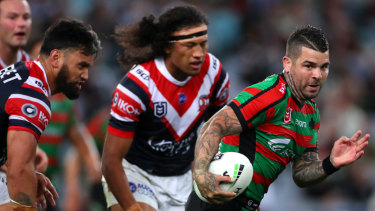 Adaptability: Adam Reynolds says an ability to change tactics mid-match will serve the Rabbitohs well in the finals.Credit:Getty Images

Rewind just under 12 months ago and the Rabbitohs were sent crashing from the competition when they were outclassed by Trent Robinson's men in the grand final qualifier.

Despite being the best attacking team in 2018, the Rabbitohs couldn't manage a try as the Roosters won through before being crowned premiers.

The 2018-19 summer was one of upheaval at Redfern with Anthony Seibold and Bennett swapping roles while the senior playing group thought long and hard about their exit at the hand of the Roosters.

After a lot of soul searching and video review, they came to the conclusion they failed to come up with a plan B after the Roosters successfully targeted their game plan.

But last week Reynolds said they proved they could adapt mid-game, change things up after recovering from 10-2 down to win thanks to second-half tries to Campbell Graham and Cody Walker.

"It showed our plan B does work and it's one thing we've worked on this season – if things don't go right we can switch it and come up with a different game plan and have belief that it works," Reynolds said.

"We tinkered with things in the game.

"We thought we weren't doing things right in the first half and spoke about that and addressed it and we were successful with it.

"We earned the right to have a shot at them rather than for the sake of it."

While the Rabbitohs scored more points than any other side last year, there is a belief that they were too reliant on their left edge and were one-dimensional.

This year, they're more rounded so far with 31 tries down the left-hand side, 28 in the centre and 27 on the right.

That diversity has given the Rabbitohs confidence they're capable of beating the Roosters at the SCG on Friday before going all the way.

"They're a tough side to crack, they're a great defensive side and they've shown that over the competition this year and last year," Reynolds admitted.

"It's just about different ways to break them down and where we can exploit them a bit."