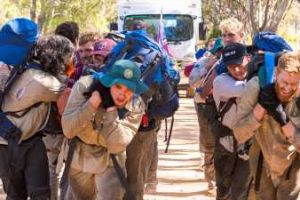 “You certainly see a different side of someone when they’re digging a hole and doing their business,” he laughs.

“For three days, you’re vulnerable and uncomfortable the whole time.”

Manly made being “vulnerable and uncomfortable” an art form in 2022. A really, really bad one.

Between the rainbow jersey saga (a situation most every NRL club privately concedes could befall their playing group), the end of Des Hasler’s second coming (a debacle only Manly could manage) and seven-straight losses to fall from finals contention, the Sea Eagles were about as comfortable as sandpaper speedos.

Might as well embrace it. Even in the dry December heat near Mudgee, dragging a five-tonne truck down a deserted bush track.

“I’ve been to plenty of these camps and some groups don’t get much value out of it in the end,” coach Anthony Seibold tells The Herald.

“But the way this one went, it was outstanding and will hopefully be something our guys carry with them for a long time, it certainly felt that way.

“They were sleep-deprived, they were gassed, it was relentless. And that was the whole point, put them under extreme physical and mental pressure because you don’t know how you’re going to respond until you try it.”

The spotlight Manly wilted under late last season was just about as extreme as rugby league gets. 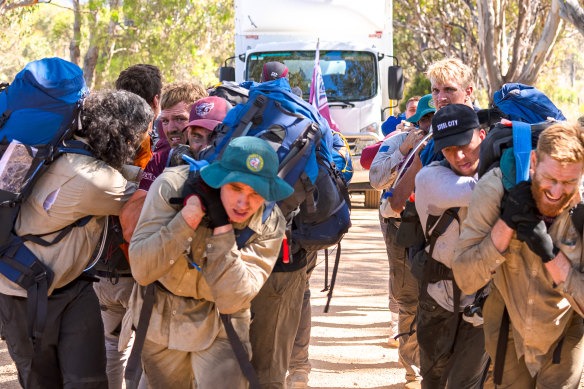 Manly players drag a five-tonne truck, loaded with another two tonnes of equipment, through the bush near Mudgee.Credit:Cameron Doyle

Whispers and subterfuge around a split in the team, fall-outs between senior players and an apparent push for Cherry-Evans to be ousted as captain surfaced as their campaign sank further each week.

Under the instruction of former Special Forces commander Ben Grumley and a 15-strong staff of fellow veterans, any division in the ranks make Manly’s three-day boot camp mission impossible.

The Sea Eagles’ investment in the exercise, undisclosed, is significant. To run a similar operation in a military context would cost around $150,000.

The pay-off, sitting atop Mount Elephant at sunrise after two days of backbreaking hikes, sleep and food deprivation and military-themed challenges, is priceless.

“In my experience in the military, when you think your body is 100 per cent done, generally you’ve got another 100 per cent or more in you, provided you’re mentally fit enough,” says Grumley, managing director of Mission Ready Group, specialists in development camps.

“Most, if not all the Manly players, especially some of the younger blokes, told us that what they thought their ceiling was, where they thought they would have tapped out or given up, they were able to keep going and had a lot more to give.

“For the Manly staff and organisation, the shared adversity helps build a team and bring them together, and gives them a chance to see what their team is made of. You can unearth leaders you didn’t know you had.”

Trudging through the bush at all hours, carrying sandbags, 20-litre jerry cans and ‘casualties’, gathering information from an ‘informant’, communicating in code and standing guard over your teammates under enemy infiltration, are challenges unlike any encountered in Manly’s day-to-day. 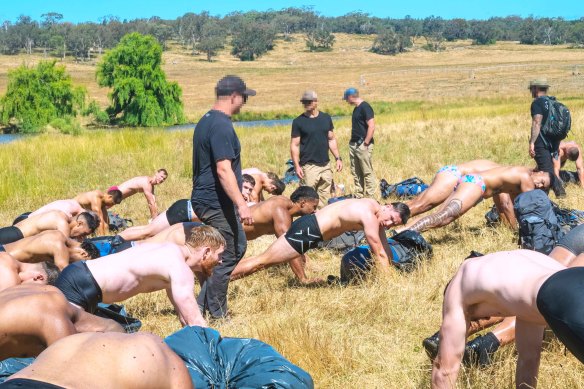 Sun’s out, guns out: The Sea Eagles squad slog it out near Mudgee.Credit:Cameron Doyle

But the “chaos”, and dramas “B, C and D” that Grumley’s team introduce to each physical and mental task have their parallels in 80 minutes of NRL and, as the Sea Eagles are all too aware, a season’s entirety.

“You run onto a footy field, very rarely will your game plan go perfectly to plan, so you need to adapt,” Grumley says.

“So after they’ve hiked to the top of their mountain at 4am, running on two to three hours of sleep a night, the recovery mission then turned into an extraction of the entire squad.

“So three days in, they had all their kit, all their equipment, everything they’d used the previous two days, and they had to get out of the bush. And in our scenario, the truck broke down.”

“That bloody truck,” Cherry-Evans laughs. “You have this very surreal moment with your teammates at the top of a mountain you’ve hiked up at 4am, there’s pretty big rocks coming loose and falling back down towards the group, you’re calling out to make sure no one cops a rock in the head.

“The sunrise is stunning and there’s this real sense of achievement sitting there with your mates in silence. And then we get back down and have to drag the truck out with even more equipment (at least two tonnes in total) than we went into the bush with.”

Cherry-Evans didn’t have to take part in the camp. But he volunteered to return early from his pre-Christmas holiday anyway for the Sea Eagles’ trip west. 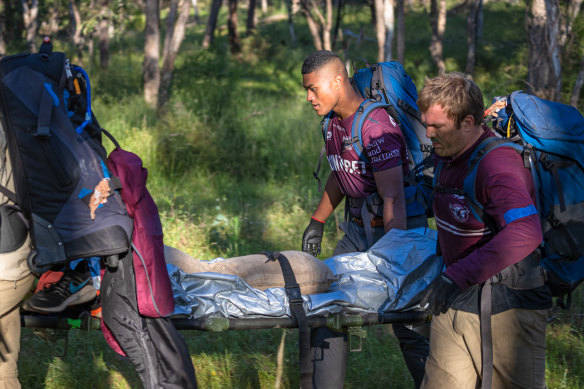 Kangaroos teammate Jake Trbojevic and new recruit Kelma Tuilagi did the same after returning from the World Cup, with Tuilagi’s first week as a Sea Eagle spent in the dust and dirt of central NSW.

“I’m glad I’ve done one, it’s something I can tell the grandkids about,” Cherry-Evans says. “But if there’s another one I might retire. So for Kelma to put his hand up like that, it doesn’t go unnoticed. You want to earn respect from your new teammates when you change clubs and to throw himself into the army camp when he didn’t have to, that’s a great first impression.”

To the surprise of precisely no one, Trbojevic went above and beyond throughout the camp, with Cherry-Evans singling out teammates Reuben Garrick and Ethan Bullemor for their efforts as well.

Grumley’s team dubbed Trbojevic the best performer, thanks to “a default always to just put himself last and put anyone and everyone else before him”, the former Special Forces commander says.

No NRL game is won on a boot camp of course, and most clubs have engaged in one in some shape or form in recent years. But for a Manly outfit that’s been through more pain than most recently, there’s potential in those three December days.

Manly players swim their gear across a dam in central NSW.Credit:Cameron Doyle

“We’ve shown each other how physically and mentally tough we can be, now it needs to transfer to the training paddock,” Cherry-Evans says. “Coming back now into our footy training, it does feel like there’s been a change there.

“It’s a big test to move on from last year, that finish with seven losses in a row hurt like nothing else. That sour taste is still there.

“So being able to refer to that army camp and the challenges we got through, you’d like to think it can get us through tough times that come during the season.”