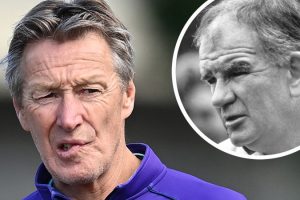 Melbourne coach Craig Bellamy can still remember the day he hung up on the great Jack Gibson.

As Bellamy’s Melbourne prepare to draw level with the Australian game’s record of 19 straight wins, which was set by Gibson’s all-conquering Easts in 1975, he recalled one of the few funny and awkward phone calls with Gibson in the mid-1980s.

“I was unfortunately never coached by Jack but when he was at Cronulla he offered me a contract to go there as a player,” Bellamy told The Sun-Herald.

“The stories you hear about Jack and how dry he was – he was a man of few words – well, the couple of phone calls I had with him, he was exactly that.

“I was living in Queanbeyan at the time and with the Raiders. Jack was like god then. He rang me up, and around that time players were ringing each other up and pretending to be somebody else.

“So Jack rang and said, ‘is Craig Bellamy there?’

“I said, ‘no, really, who is it?’, then hung up on Jack thinking he was one of my teammates. He then rang 10 minutes later and said, ‘hey, Craig, before you hang up again, this is Jack Gibson’.

“I was that embarrassed. I had got done by one of the boys on a Sunday and Jack called on the Tuesday. Fortunately, he took it in good spirits.”

Bellamy passed on Gibson’s offer because he was happy in the nation’s capital, playing good football and enjoying being coached by Don Furner.

Now Bellamy is 80 minutes away from joining Gibson as the only coach of a side in the history of Australian rugby league to win 19 in a row. It is a remarkable effort. 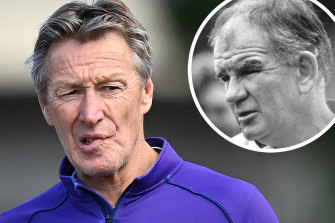 During his playing days at Canberra, Craig Bellamy spoke with Jack Gibson.Credit:Getty

The Storm play the Gold Coast Titans on Thursday night. Parramatta then await Melbourne on Saturday week, which could double as a chance for the Storm to break the record.

Bellamy loved watching the Roosters in 1975. The side lost in rounds two and three, then won every game before a shock loss to St George in the major semi-final. They met the Dragons in the grand final and thumped them 38-0.

For the record, Melbourne also suffered their only losses in rounds two and three this year.

Bellamy missed the 1975 decider because he had to attend his sister’s wedding. He loved Graeme Langlands and Billy Smith, but also respected the Roosters greats, including Arthur Beetson, Ron Coote, John Peard, Bill Mullins and Barry “Bunny” Reilly.

‘We’re probably a bit like the Roosters side back in 1975 where we don’t really talk about [the wins].’

A lover of rugby league history, Bellamy said he planned to give his players a rest before the finals and would not alter those plans for the chance to rewrite the history books.

“We’re probably a bit like the Roosters side back in 1975 where we don’t really talk about [the wins],” Bellamy said.

“People outside the team and the bubble, I know they’ve talked about it the last couple of weeks. But we’re only focused on preparing well for this week. That’s all we can do. If we do happen to get it, we’ll have a beer after the game.”

Members of the 1975 premiership side had mixed emotions about their streak being under threat.

“I say good luck to the Storm if they do beat our record,” Coote said. “We had a great time, a very good side and a very good coach. The record was a bit of motivation for Jack. Jack always made training interesting and fun.”

Ian Schubert, the baby of the Roosters pack who arrived from the bush to play with Easts that year, said: “I hope they do get there. I can’t believe the record has lasted this long. It was always going to take a good side to do it, and Melbourne are a good side.”

Prop Ian Mackay said: “A mate of mine who lives in Sydney asked me not long ago, ‘your record looks like it might be broken’, and I asked, ‘what record?’

“At the time we won all those games and didn’t think much about it. I haven’t thought much about it in 45 years. I watched ‘Freddy’ [Brad Fittler] on Thursday night and there was footage of a couple of our guys with Jack on our shoulders, and Arthur also, and my wife said to me, ‘you guys did all right to win 19 on the trot and you should be proud’. It was a great milestone for everyone.

“I’ll have my fingers and toes crossed next week watching them against the Titans. If the record does go, at least we can say we held it for a long time.”

Mackay was an electrician and also remembers being hounded by a colleague who wanted to bet him $20 they would lose their major semi-final against the Dragons, which they did.