Home » Rugby League » What do the Bombers and Pies do? The big AFL draft questions

What do the Bombers and Pies do? The big AFL draft questions

Like most of this year's footy events, 2020's AFL national draft will be unique. It will revert to one night (December 9 at 7pm), instead of two, and will be conducted virtually with players video-calling in from capital cities.

Draft picks can be traded from now right up until during the event. Rival teams can use their picks to bid for other club's father-son/academy players on the night, but the club with first dibs on them can match a bid using draft points. 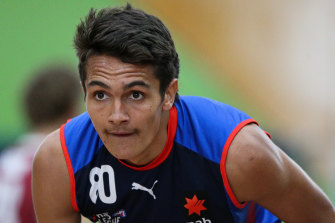 Against those arguments is the fact you are telegraphing to the player you do take that we don't think you were the best in the country.

And you also deny them a little financial bonus for being pick one in the country.

2. What do Essendon do with their picks?

Three picks in the top 10 – six, seven and eight – gives the Bombers a juicy draft hand. Firstly they will consider whether to use all three in this draft or trade one or more picks, either to get lower in this draft (consider trying to tempt North Melbourne to move on pick two) or even get into the first round of next year.

If they keep the three picks, then what is the best approach? Does it change your strategy if you have a cluster of picks?

"I think Essendon with their list at the moment, they just call out the players in the order they rank them and they will get a blend of types in that anyway. There are not three clear midfielders or three clear key positions players in a row at those picks," a recruiter told The Age.

3. Do you take the best talent or the best fit for your needs?

It might sound self evident that you take the most talented player. But it's not. The Giants, for instance, have always had an abundance of inside midfielders because academies have thrown up access to elite players at a discounted rate who all happened to be inside midfielders. 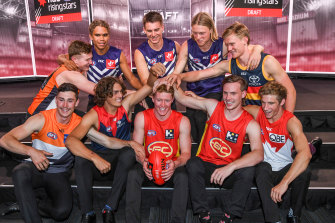 Melbourne, as another example, now have a depth of tall players and inside midfielders and have been looking for more speed and run.

But do you do that at the pointy end of the draft? Or rather, at what point in the draft does elite talent become overtaken by positional need? There is no one definitive answer to this as it varies between list demographic, but typically the top five to seven players in any year are a cut above the other players and cannot be ignored, so after that point the ledger might swing a little more towards need over talent.

A respected list manager said: "It depends on your list but I think in your own mind you end up believing you have taken the best player because I think subconsciously your need influences your impression of the best player. And you spend so long watching tape of players that fit a positional need that you fall in love with them."

4. What do Collingwood do?

Forgetting all the drama and rancour of the last month and whether they got commensurate value for the players they traded out, clearly a priority for Collingwood was to get into this draft. They have two first-round picks and their first-rounder next year is up for sale. They can comfortably trade that pick because they have father-son Nick Daicos coming through next year who will be a first-round pick and they have adequate points to cover selecting with later draft picks.

That future first round is a very valuable pick because this year's draft has been rendered more speculative due to the absence of exposed form from so many players.

Collingwood will want to trade next year's first to get high in this year's draft.

It is doubtful it can get them into the top five where they would like to be to be able to claim one of the players that a consensus of recruiters would rate as the clear best available players.

Taking out the academy and father-son players, recruiters tend to agree that Logan McDonald, Riley Thilthorpe, Elijah Hollands, Denver Grainger-Barras and Will Phillips are a class above the other players in the draft (on exposed form).

6. Will the Roos use pick two on a player?

This is the second time North Melbourne have had pick two (the other was in 2002 for Daniel Wells). They’ve never had pick one.

North indicated during the trade period that pick two was on the table for the right deal to see what it would flush out.

The thought behind it was that nailing two picks in the top 10 could be more transformational than using just pick two, given the urgent need for young talent at Arden Street.

Increasingly now the noise out of North suggest they are more likely to hold the pick. Recruiters believe the Roos are every attracted to Hollands, an outside midfielder who is an elite ball user able to play in multiple spots on the field.

7. Do non-Victorian players have an advantage this year?

Depends which way a recruiter looks at it.

They do in the sense that non-Victorian footy was shortened but not cancelled, meaning players like McDonald (WA), Thilthorpe (SA), Grainger-Barras (WA) could be studied, even via tape, but Victorian kids could not.

Players do get drafted in the first-round, anyway, when they’ve been injured in their draft year. Hollands, who did an ACL this year, is expected to go high, for example. Recruiters know how good he could be without having seen him in 2020.

8. Will clubs use all their picks?

No. Some clubs believe there will only be 50 names called out on draft night as a combination of reduced list sizes and uncertainty around talent because of the COVID-19-affected year for the Victorian under-18 players.

Hence the AFL has (mercifully) cut the draft back to a one-night affair.

There is every chance many clubs won’t use all picks and leave one spot open on their list for a player to train with them in pre-season and then be taken in the supplemental selection period.

It is also likely that clubs will hold open a rookie place for the mid-season draft next year when those Victorian kids who didn't get to play this year resume playing next year and clubs can have a good look at them. Clubs will then want to use that 2021 mid-year draft to get a jump on next year's national draft.

9. Could there be a bidding frenzy?

There are plenty of prospects linked to clubs already through academies and father-son allowances.

Ugle-Hagan, Campbell and Jones will be called out very early. The Hawks, for instance, are very interested in Campbell and so he could go early while Jones is rated a top 10 pick. Gulden could be a late first-round pick.

On top of this, 17 of 2019’s 48 players in the under-17s All Star grand final squads were father-son or academy prospects.

Recruiters seem split on if there will be a bidding frenzy or not.

In one sense they are, but they also know that over the years they pick top-end talent at the draft and then that talent proceeds to walk out the door a few years later. Jye Caldwell is the latest to do that, heading to Essendon.

Like North Melbourne, trading a suite of first-round picks to gain access to single-figure selections is one option being considered by the Giants.

"We've got great confidence in that early part of the draft – that top 15, top 20, they've generally announced themselves at 16 or 17-year-olds. Our team's got a really good handle on those guys," Giants footy boss Jason McCartney said last week.