Wests Tigers do the unthinkable 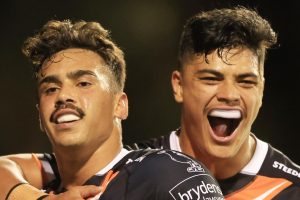 Leichhardt loyalists have endured some awful afternoons on the hill in recent years as they’ve watched their side botch all the big games, but the boos were replaced by boisterous bravos as the Tigers handed the Panthers their first loss of the year.

Two months after they were taunted by their fans after an embarrassing effort against the Cowboys, the Tigers claimed their best win in years in front of a heaving crowd that couldn’t have been any prouder.

Much-maligned halfback Luke Brooks was brilliant from the outset, repeatedly putting Luke Garner in space with nifty footwork before he came up with a textbook try-saver to deny Dylan Edwards.

But it was the aggression he showed in the next set that typified the Tigers’ hard-edged approach as he fearlessly took it to the world’s best prop after James Fisher-Harris tackled him as he kicked.

The Tigers were far from perfect as they conceded 11 penalties and six restarts, but the fans’ frustrations later turned to joy when the hosts were awarded a penalty try with 16 minutes to go after Luciano Leilua was hit high by Robert Jennings.

It took 357 days, seven players missing through Origin, a powerhouse prop out suspended and a date with their fierce rivals to end Penrith’s incredible regular-season winning streak.

Chasing their 13th win in a row to start the year – and 28th straight in the regular season – the Panthers were simply outplayed by a Tigers team that smelled blood in the water and happily went in for the kill from the opening whistle.

Diehard fans will lament the toll Origin took on this amazing team, but they went into the game as favourites and had plenty of chances to get the job done.

But things are always a fraction off when you have so many guys filling in and playing slightly out of position, and Penrith lacked their usual fluency with basic errors and broken set plays costing them on the night

It was the Tigers’ first win over the Panthers at Leichhardt Oval since 2000. Digital image by Gregg Porteous � NRL PhotosSource:The Daily Telegraph

We’ve marvelled at his silky skills in attack this year, but Friday night was a coming of age in defence for Danie Laurie as he put on a masterclass at the back against his former team.

The pint-sized custodian came up with two huge plays in the first half to smash Charlie Staines into touch a metre out before he chopped down a rampaging Robert Jennings to keep the Tigers’ line intact.

But it was his courageous take in the second half when he was tackled in the air by Viliame Kikau that would have impressed his teammates the most, which is why they all rushed in angrily to protect their fullback who had earlier opened the scoring.

The roar across the inner-west when Jacob Liddle charged down a grubber in the first half and then raced 95 metres to score was deafening, but it had nothing on the colourful farewell Tigers fans delivered to Panthers coach Ivan Cleary.

Diehard supporters have long memories of how he left the club, and they were quick to remind him as they sprayed him with obscenities, blew him kisses and gave him middle finger salutes as they celebrated the epic win.