NSW hooker Damien Cook promised there won’t be a repeat of Queensland roughing up James Tedesco and Nathan Cleary without teammates leaping to their defence as the Blues No.9 braced for a Maroons ambush.

Just a week after NSW coach Brad Fittler said he was disappointed with two incidents in last year’s series decider involving his captain and vice-captain, one of the state’s most experienced players said the Blues had heeded the message. 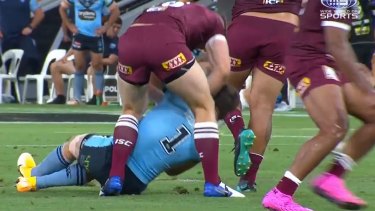 Jai Arrow slams unconscious James Tedesco into the turf in the 2020 decider.

“Those two guys, you put them up there as the top two [players] of our team,” Cook said. “They’re leading the way and that’s why they’re captain and vice-captain as well. We’ve got to back them 100 per cent in what they do in this game. You’ve got to look after your halfback and fullback.”

Fittler excused Tedesco, Cleary and Jack Wighton from media duties at the NSW captain’s run on Tuesday afternoon after a heavy week of commitments. 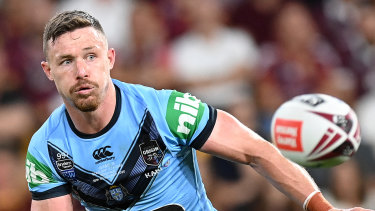 Cleary is trying to stamp himself as a dominant playmaker at Origin level as he pushes Queensland captain Daly Cherry-Evans for the Kangaroos No.7 jersey.

When told about Roy Masters’ column in the Herald and how he pointed out Cleary’s 1-3 record in the three Origin games and grand final last year, Fittler said: “That’s reality. At the end of the day, people forget what happened in that game and will come back to the stats, then they do their judging. 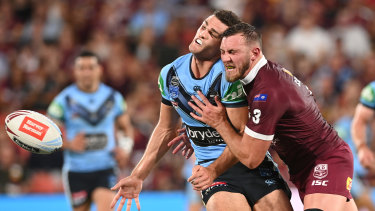 The halfback was driven to Queensland Country Bank Stadium an hour early by Blues staff and spent more than half an hour inside the $250m venue on his own practising goal kicking.

‘We’ve got to back them 100 per cent in what they do in this game. You’ve got to look after your halfback and fullback.’

Asked if the Blues were prepared for a Queensland ambush, Cook said: “Every time. They like to fly out of the blocks and that’s what they did in game three last year. We’ve just got to make sure we start fast.

“Every team talks about it, but we have to keep the pressure on. We can’t be making silly mistakes and we can’t afford to make silly mistakes or be going down a man. We have to be disciplined.”

Cook’s South Sydney teammate Latrell Mitchell will return to NSW colours for the first time in 2019 and walked onto Queensland Country Bank Stadium on Tuesday wearing a big grin – before dismissing the Maroons’ mind games.

“I don’t listen to anything Queensland have to say,” Mitchell said. “They play mind games. The best fella at it is Wayne Bennett, but he’s not coaching. I can’t wait [to play], honestly. It’s been a long time coming.”