Home » Rugby League » ‘We should have first rights’: Red V defiant about sharing with Sharks

‘We should have first rights’: Red V defiant about sharing with Sharks

St George Illawarra powerbrokers believe they should determine which fixtures are played at Netstrata Jubilee Stadium in any venue-sharing arrangement with arch-rivals Cronulla, declaring "Kogarah will always be our spiritual home."

As revealed by the Herald, the Sharks are considering shifting some of their home fixtures to Kogarah if the refurbishment of their leagues club precinct leaves PointsBet Stadium unavailable from next season. 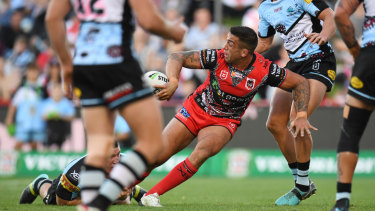 Rivalry: Paul Vaughan’s Dragons could be forced into sharing a venue with the Sharks.Credit:AAP

News of the potential incursion from their nearest rivals caught Dragons officials off guard, although they remain bullish the area will always be their territory.

"It's one of our major catchment areas and that is never going to change," Dragons chairman Andrew Gordon said. "We will have to look at our spread of home games and they will have to work around us.

"I'd imagine we'd be the ones with the first rights to be picking our home games there. If they so happen to end up negotiating something with council, then so be it. [But] the first port of call should be our games there and they can look at whatever is left in terms of availability.

"Kogarah will always be our spiritual home."

The Sharks are in discussions with developers to determine the exact impact the leagues club refurbishment will have on their home ground. It is understood the works will take 18 to 24 months to complete, although there is no official start date as yet.

A move into enemy territory at Kogarah is viewed as the least disruptive contingency plan, as Sharks fans would only have to travel about 10 kilometres from their traditional home in the Shire. Should the shift eventuate, it will add further spice to one of the NRL's fiercest local derbies.

Dragons players were perplexed by the news – and then defiant – about potentially sharing a home ground with their closest rivals.

Being an ex-Sharks player, I don't see why you would want to take your home games right in the heart of St George.

"I thought it was weird, especially with the rivalry," Dragons forward Tyson Frizell said. "It's like the Roosters playing Souths at Redfern. Being an ex-Sharks player, I don't see why you would want to take your home games right in the heart of St George. That's just my opinion.

"Even though technically it will be a home game for them, I guess everyone knows it's the Dragons' home ground. It will be enjoyable to play them if it's their home game and we're against them at [Kogarah]."

Captain Gareth Widdop added: "It's not their home ground, it's the Dragons' ground. They can go play down the local oval I reckon."

The only major Sydney "league" stadium set to be in operation next year will be Bankwest Stadium at Parramatta, limiting Cronulla's options in finding a temporary home.

The $360 million, 30,000-capacity ground at Parramatta is already set to be used by the Eels, Tigers, Rabbitohs and Bulldogs for either part of or the entire season in 2020 while ANZ Stadium and Allianz Stadium are refurbished and rebuilt.

The NSW government confirmed on Wednesday the ANZ Stadium facelift would begin after Sydney's State of Origin fixture next year.

The Sharks will host the Dragons at PointsBet Stadium in round 18 later this year, potentially the last time the two clubs face off at the ground before work starts on the leagues club project.

Sharks confident in vote to secure second home despite backlash