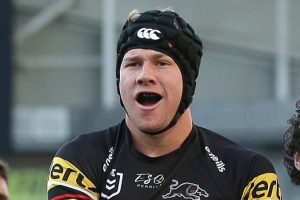 Nathan Cleary has given a huge endorsement of Canterbury-bound teammate Matt Burton’s importance to Penrith’s premiership assault, rating the six-gamer a “superstar of the future” after a summer tug-o-war for his services.

On the eve of the opening round of the season, Cleary told the Herald how highly Burton’s teammates rate him at Penrith after the Bulldogs tried to prise away the playmaker 12 months before he is due to join the club. Burton has signed a three-year deal to head to Belmore from 2022. 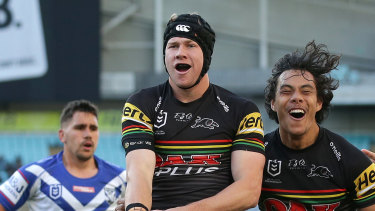 Matt Burton has signed a three-year deal at Canterbury from 2022.Credit:Getty

Bulldogs coach Trent Barrett, who was Ivan Cleary’s assistant at Penrith last year, would welcome Burton teaming up with Kyle Flanagan in the halves this season as he tries to rebuild the Belmore club.

But so far any advances have been rejected by the Panthers, who developed one of the most exciting prospects in the game while he completed his schooling in Dubbo.

The subplot to the Burton off-season drama is the fact the Bulldogs and Panthers will meet in round two at Bankwest Stadium, one of season 2021’s more intriguing early-season matches.

“He’s a great athlete, a great player and a great bloke. It would be good if we can get him [this year], but wherever he is he’s going to succeed.”

Nathan Cleary will co-captain the Panthers alongside Isaah Yeo after James Tamou’s off-season defection to the Tigers and the No.7 is adamant his game can only get better, despite nearly winning last year’s Dally M Medal after leading Penrith to 17 straight wins.

“You’re never going to be perfect, but you can always strive to be better,” he said. “That’s my mindset coming into every training session every day. We’re really lucky with our coaching staff out there, they’re always pushing us to be better and the intensity every day has been really good.

“I feel like I’m just scratching the surface at the moment and there’s a long way to go, not only skill-wise in terms of footy, but leadership as well.”