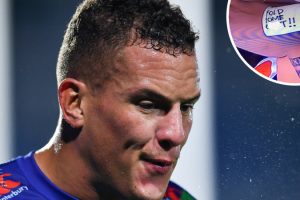 Warriors prop Kane Evans is in hot water with the NRL after writing an obscenity on his wrist tape, which was picked up by cameras during Sunday afternoon’s broadcast.

Evans was nominated as 18th man for the Warriors’ clash against the Panthers at Suncorp Stadium and could be seen with the message “fold some c—” on his wrist strapping while sitting on the bench.

Evans was not activated during the game, despite the Warriors suffering four injuries in the first half – none of which were the result of foul play.

The NRL said they would examine the incident at Monday morning’s weekly football review, where an appropriate sanction will be decided upon.

The NRL has come down hard on offensive slogans written on strapping in the past. In 2016, Andrew Fifita was fined $20,000 after he scrawled a message of support for convicted one-punch killer Kieran Loveridge on his wrist.

In 2014, Evans’s current Warriors teammate Matt Lodge was banned from the game for two games for writing an obscenity on his strapping for an under-20s Origin game. 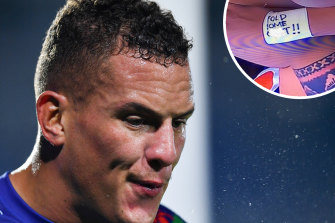 Kane Evans and the obscene message on his wrist strapping.

Lodge was forced to remove the tape by NSW officials during the match.

ABC Grandstand commentator Andrew Moore was critical of Evans after the swear word was picked up by the commentator team.

“If Evans is that much of an imbecile, he should be suspended before he takes the field,” Moore said.

Any suspension for Evans would be a major blow for the New Zealand side, who have Tohu Harris, Wayde Egan, Roger Tuivasa-Sheck and Rocco Berry all looking at spells on the sidelines after suffering injuries in Sunday’s round 18 clash.

Tuivasa-Sheck suffered a nasty head knock during the game which could see him ruled out for a number of weeks, while coach Nathan Brown said Harris and Egan would likely now be out for the season.

“Roger is in the best shape. I think Tohu Harris has done his ACL which obviously is a terrible injury and Wayde Egan’s shoulder is not looking likely to play again this year and then Rocco has done his hamstring,” he said post-match.

Brown said Egan offered to go back on the paddock and could be seen sitting on the bench, but was unable to even pass a ball due to the state of his shoulder.

“It’s not looking likely he’ll be any good for the rest of this year without having surgery,” he said.