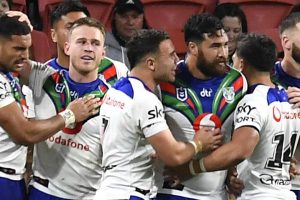 The Tigers’ finals hopes are in tatters after star fullback Daine Laurie suffered a suspected season-ending right ankle fracture in the opening minute of a disastrous 18-16 loss to the inspired and brave Warriors.

When Laurie, the shining light in a dark season for Wests, was assisted from the field the gloom was palpable on coach Michael Maguire’s face high in the coaches box at Suncorp Stadium. It was well justified concern and the pressure from a loss they could not afford to have will only increase scrutiny on Maguire.

Veteran Peta Hiku returned early from shoulder surgery to captain the Warriors side and said pre-game he was determined to lead with the spirit of former skipper Roger Tuivasa-Sheck as inspiration. Hiku delivered on his promise against a lethargic Tigers outfit that don’t deserve to play finals football based on this dire performance. It was one of the Warriors bravest wins.

The Tigers collapsed in a screaming heap in the second half. Leading 10-nil at the break, they clocked off as the Warriors came storming home.

Wests were complacent and the Warriors made them pay with barnstorming centre turned back-rower Euan Aitken and Bunty Afoa charging over. Aitken snaffled a short Luke Brooks dropout – retro style like Mark Geyer in the 1991 grand final – to give the Warriors an 18-10 lead. They hung on.

The Warriors were only able to name 20 players for the clash earlier in the week, but didn’t turn it up.

A season that started with such promise went south largely due to a massive injury toll. When Tuivasa-Sheck was farewelled from rugby league on Thursday with a haka it was not a goodbye to belief or guts. With at least seven of the Warriors regular starting 13 out, the rest lifted.

A play that summed up the Tigers’ attitude was when Joe Ofahengaue played the ball on the Warriors tryline at the death with no dummy-half in place.

For the second time this year, Brooks thought he had scored the winning try only to be overruled by the bunker when a charge down was correctly ruled to have struck his arm.

This was the moment the Tigers, stuck on 14 points and two wins outside the top eight, had to seize but they fluffed their lines.

Laurie had blazed the path for them this year with his 13 linebreaks and 13 linebreak assists creating plenty of spark. When he left the field the light went out in Tigertown.