Michael Walters is keeping Fremantle in contention for a return to finals action for the first time since 2015.

The exciting small forward kicked the winning goals in both of his side’s games prior to the bye – against the Brisbane Lions and Collingwood – and his 25 possessions and equal career-best six goals against Port Adelaide led his side to a 21-point win at Optus Stadium on Saturday. 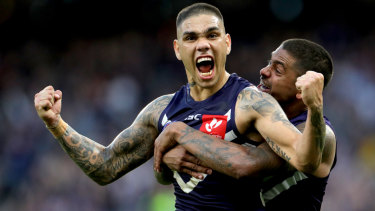 Michael Walters was the difference against Port Adelaide.Credit:AAP

The Dockers continue to defy external expectations and a growing injury list and their 15.19 (100) to 12.7 (79) result puts them in sixth place on the ladder.

It was their seventh win and third in a row – all against teams thereabouts or better.

Both the Dockers and Port looked like teams coming off a bye though, which they were.

In the first three quarters the lead changed six times. Port's biggest lead was just 12 points, which was in an impressive opening term; the Dockers was by 10 points, in the third.

Port had their nose in front by the slimmest of margins at the final change, but Fremantle could have blown the game apart in the final quarter. Midway through the term, they had been forward 14 times, opposed to Port’s three.

But the Dockers managed only three behinds, until Walters took his fifth mark and converted his fifth goal.

That took the margin to eight points and Port didn’t get any closer, not scoring in the final quarter.

For the Dockers, the win breaks a three-year run of losses suffered after their bye.

It appeared as though Fremantle was going to be a victim of a large injury toll to their tall players. Since they played last they have lost both Rory Lobb and Alex Pearce, probably for the remainder of the season.

Sean Darcy came into the side for his first game of the season, and had a tough day out against Port's Paddy Ryder and Scott Lycett.

Ryder had two goals on the board inside the first 10 minutes.

All 5.1 of the Power's opening-term score came from marks taken inside their attacking 50 metres. Two of those came too from the boot of Kane Farrell.

But after taking six marks inside 50 in the opening quarter, Port managed only five more for the game. 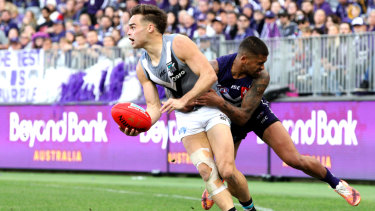 Hogan shaping as a hero

Key forward Jesse Hogan has had his knockers since moving to Fremantle from Melbourne at the start of the season.

He'd kicked just 10 goals in 10 games this season, after booting 152 goals in 71 outings with the Demons. Against Brisbane in Round 10, he had just eight handballs for the game.

But after a slow start against Port, he enjoyed two minutes of play midway through the second quarter that gave him plenty of confidence.

The AFL needs to start looking after Port Adelaide better in regards to them returning to action after their trips to China.

They may get a bye to go with their frequent flier points, but after all three games in Asia they have played their next games away from Adelaide.

The result, three losses – all after good starts.

In 2017, they lost to the Cats in Geelong by two points and last season to Hawthorn in Tasmania by three.

Port welcomed Hamish Hartlett back on Sunday for his first game since round five of last season. He had 23 touches and Travis Boak was terrific also with 36. 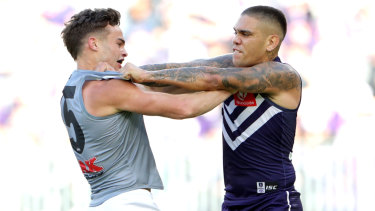 Since impressing in Perth in Round 5 with a 42-point win over West Coast, Port has struggled against sides pushing for a top-eight finish. Their three wins since then have been against North Melbourne, the Gold Coast and St Kilda. Even before the win over the Eagles, they only beat Melbourne and Carlton.

If they want to return to September action, the need to find a way to turn that trend around.

Of Port’s remaining 10 games, seven, maybe eight, are against sides who will still think they are playing finals this year.

And the next month could well define their season, as their next four games are all at Adelaide Oval.

Bells ‘N’ Bows looks to have Cowra Cup all wrapped up

Cranbourne track invaders to be banned for life