Mr Walker appeared in Manly Local Court alongside lawyer Ramy Qutami on Wednesday and entered two pleas of not guilty to two counts of common assault. 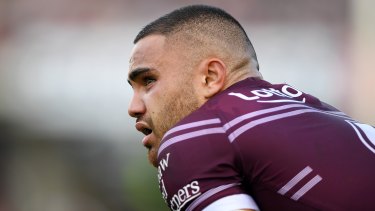 Just before 9pm on November 1, police were called to Little Italy Pizzeria on May Road, Narraweena, following reports of a fight.

Police have been told Mr Walker left the restaurant and attempted to enter the vehicle of a woman, who was unknown to him, parked outside the restaurant.

It is alleged Mr Walker then became aggressive and assaulted the two men, including punching one in the face, before fleeing.

Mr Walker was arrested nearby a short time later and taken to Manly Police Station.

Nine News obtained CCTV footage from a nearby shop, which appears to show Mr Walker in a red shirt raising his arms as he appears to speak with someone.

He begins to walk away, before turning around and continues talking in what appears to be an aggressive manner. After a few exchanges, Mr Walker walks back in the direction of the person he is speaking to.

Manly have no plans to stand down Mr Walker before more details about the alleged incident become publicly available. Mr Walker has one year left on his contract with the Sea Eagles.

Mr Walker has not been stood down under the NRL's no fault rule, which is automatically applied for cases with a maximum 11-year sentence, but the NRL integrity unit is investigating the matter.

Mr Walker will next appear in court on January 13.