‘Utterly embarrassed’: How the Australian media reacted to record Bledisloe loss to All Blacks 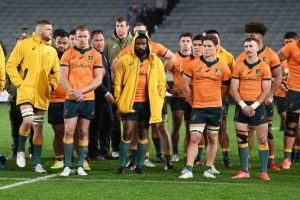 How the Australian media reacted to the Wallabies’ record loss to the All Blacks at Eden Park last night.

By Nic Savage of news.com.au

Dave Rennie’s men were utterly outclassed at Eden Park, a venue where New Zealand has not lost since 1994.

Despite trailing by just six points at half-time, the Wallabies capitulated in the second half to suffer yet another defeat to their powerhouse trans-Tasman rivals.

When David Havili scored New Zealand’s eight try in overtime, the All Blacks broke the record for most points in a Bledisloe Cup match at Eden Park.

“We didn’t respect the ball. A couple of intercept tries, going a bit out of our shape there a bit,” Wallabies captain Michael Hooper confessed after the loss.

“You play a team like New Zealand and they capitalise and turn nothing into something. We fronted up physically well but didn’t stay in the fight long enough.”

'The gap has never been wider'

It’s been 19 years since the Wallabies last hoisted the Bledisloe Cup aloft, but they have never been further from breaking the drought.

The 57-22 defeat only added to the mental scars which have hindered the Wallabies’ development for almost two decades.

In the 24 hours after the Wallabies clinched a captivating series win against France, the Herald picked up the phone and spoke to several senior RA officials to gauge the mood.

One of those officials compared the Bledisloe Cup to the America’s Cup.

Eventually, the official said, the Wallabies would win the Bledisloe back. And what a moment it would be when the drought was broken.

After yet another demoralising series, winning another America’s Cup seems more realistic than ever winning the Bledisloe back.

Australia hasn’t entered a boat in that race since 2000.

Coach Dave Rennie said: “We were well beaten because we didn’t treasure the ball well enough,” he said. “I thought we defended really well [in] a really physical first half but we made some really poor decisions defensively. We got exposed down short sides and threw intercepts when there was clear space in behind to put the pressure on them, so it’s disappointing.”

The context of a throwaway line this week from Andrew Kellaway, saying some of the All Blacks’ “aura” had possibly “worn off” now a few youngsters had the opportunity to face them, was disputed by Rennie. Who knows if the comments influenced an inspired All Blacks clinic.

“Clearly we’re not going to entice the All Blacks to fire up any more than they normally do,” Rennie said.

“We went in with a plan and we can’t execute that plan, then we’ll seriously look at what we’re doing. We want to have an optimistic mindset around how we play but you’ve got to play what’s in front of you.”

Not as bad as it looked

And this from the UK Telegraph’s Charles Richardson.

Trailing 21-15 at half-time after scoring two fine tries, Australia would have been hopeful that, finally, it might have been their day.

In a ruthless 18-minute showing after half-time, Ian Foster’s side blitzed four tries and a penalty – the first 10 points of which were scored with 14 men – to package up those misplaced Wallaby hopes and drop-kick them back across the Tasman Sea. The scoreline dictates that this was a rout, but do not be fooled. Yes, it was a record home win for New Zealand against Australia; yes, it was their 19th successive Bledisloe Cup title; yes, their nigh-immaculate Eden Park record lives to fight another day and, yes, they kicked off their Rugby Championship campaign in some style, scoring eight tries in a match that showed their vast potential after, by their lofty standards, a mediocre 12 months.

But this was far from a disaster for the Wallabies and, until the All Blacks’ 20 minutes of terror, Dave Rennie’s charges were the better of the two sides – certainly with ball in hand. And, in captain Michael Hooper, they have one of rugby’s most extraordinary warriors.