Undermanned Eagles outwork Carlton to all but end Blues’ season

Carlton’s season of a thousand cuts has reached its all but fatal bleed after the Blues were out-hustled by a severely undermanned but gritty West Coast at the SCG on Sunday.

As has been the way in most of their losses this season, David Teague’s men were not comprehensively outplayed but could not maintain their rage for long enough, losing every quarter en route to a 22-point loss which left them 4-8 and condemned to an eighth straight season out of the finals. 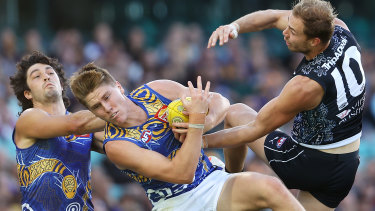 Harry Edwards of the Eagles wins the ball over his namesake, Harry McKay of the Blues during their clash at the Sydney Cricket Ground.Credit:Getty Images

There could be no legitimate excuses for the Blues. Yes, they have injuries, including a match-ending head knock to spearhead Harry McKay early in the game, but they paled in comparison to those of the Eagles, who were without Luke Shuey, Jeremy McGovern, Tim Kelly, Liam Duggan, Josh Kennedy and Oscar Allen, as well as All-Australian Brad Sheppard for most of the game.

West Coast’s remaining core were tougher and cleaner for longer than that of the Blues. 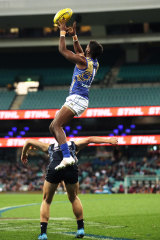 Liam Ryan was the match-winner, taking a third-quarter hanger to go with four goals before being sidelined by cramp late in the game.

Even without Kelly and Shuey, West Coast’s midfield bested the Blues’ on-ball brigade, with Elliot Yeo, Andrew Gaff, Dom Sheed, Jack Redden and Nic Naitanui hauling their side over the line, while Shannon Hurn provided a sense of calm when needed.

Having been overrun by Essendon eight days earlier, West Coast were ultimately more desperate, too. Carlton laid just 44 tackles and just four inside 50, not the signs of a team that knew its season was on the line.

Sam Walsh was mighty as ever, while Jacob Weitering kept Jack Darling relatively quiet but it was the same old story for most of the rest of the Blues, who floated in and out of the game and now face a long and probably fruitless run home.

There have been several instances this season in which a player’s decision to bump has landed them in trouble. But generally, the bumping player has run into issues with the match review panel. During the first term on Sunday, Sheppard dashed towards Carlton’s Adam Saad in a bid to curb the Blues speedster.

Sheppard elected to bump, and would likely have run afoul of the MRO had Saad been hurt in the contact. But it went the other way, with Saad bouncing off the West Coast defender and leaving Sheppard much worse for wear. 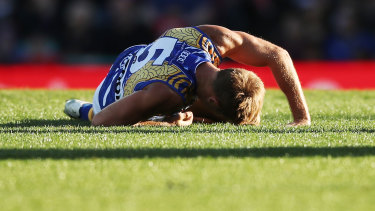 Brad Sheppard was injured in the Eagles’ game against the Blues at the SCG.Credit:Getty Images

The Eagle landed heavily and was substituted from the game under the league’s concussion protocols, replaced by Jamaine Jones. The Blues soon had to make their own substitution, with McKay hitting the SCG deck heavily after a marking contest also involving West Coast’s Harry Edwards. McKay was assessed on the sidelines before being removed from the match for Jack Newnes. Carlton have the bye next week, meaning McKay may not need to miss a match under the mandatory 12-day break rule for concussions. Nic Newman was another Blues casualty, coming down nastily from a pack late in the third term. He would play no further role in the game.

It’s been a big month or so for screamers, and renowned aerialist Ryan wasn’t about to others have all the fun. Ryan soared onto the back of Carlton’s Liam Stocker at half-forward midway through the third term to take a grab likely to earn the West Coast soarer another mark of the year nomination. Eagles youngster Xavier O’Neill couldn’t finish off Ryan’s brilliant work though, missing a set shot from the ensuing play. But minutes later Ryan took matters into his own hands, out-marking Stocker after an Eagles centre clearance and then taking advantage of the “stand” rule to dance around Stocker and Walsh and finish clinically on the run.